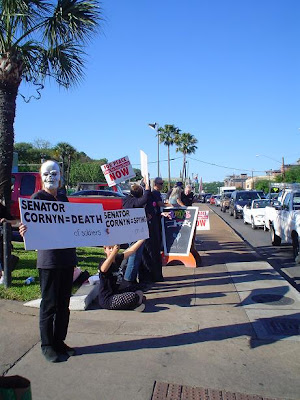 On Friday afternoon, April 18, 2008, at rush hour, members of CodePink and Movement for a Democratic Society (MDS/Austin)– dressed in black and some wearing skull masks — marked the April Iraq Moratorium at the busy corner of Sixth and Lamar in Austin. Some carried signs taking digs at conservative Republican Sen. John “Corn Dog” Cornyn, known as the president’s faithful “lap dog.” Said one demonstrator: “The war just keeps going on and people just keep dying. So we must keep saying, ‘NO!’ Photo by Heidi Turpin. 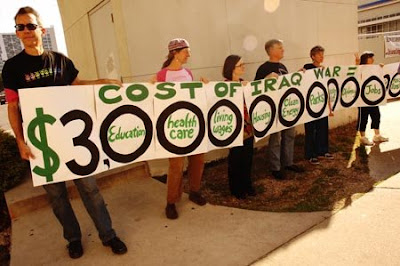 CodePink members and others gathered on tax day, April 15, to remind us of the $3 billion-a-week war we’re funding while the economy goes in the tank. “We should recall that what’s taxing the American economy the most is the ongoing occupation of Iraq,” said U.S. Rep. Lloyd Doggett. “Real tax relief begins when we begin a safe, orderly phased withdrawal from Iraq.” Photo by Sandy Carson.