The On-Going Battle Over What Seattle Will Be

There was an article in the Seattle Times last October about the transformation of the area around south Lake Union. I was visiting for a little big city culture, and I could see from the hotel window all the cranes and the new condos going up. The Times article talked gushingly about how trendy it is. Yes, as it drives out those who can no longer afford to live much of anywhere in Seattle. Even the tiniest one-bedroom apartments are well over $1,000 a month, and small two-bedroom condos start at $350,000. Even Capitol Hill, a long-time lower-income area, is changing. Nouveau riche moving in everywhere, in Seattle and all its satellite cities such as Bellevue, Kirkland, Redmond to the east, Des Moines and Federal Way to the south, and so on.

And gentrification is an issue in every majour city in the US. Segregation through economic sanction, in effect. Capitalism is not the wonderful, fair, equitable system that those in power would have us believe. It is a racist, ugly methodology that seems certain to fail ultimately for any number of rational reasons, but it is enough to say that it cannot be sustained in a truly human world. 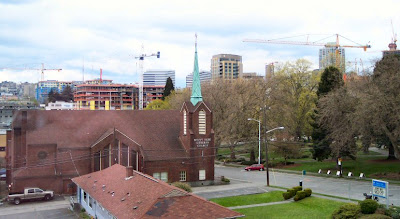 Taken from the Holiday Inn on Dexter looking east, April 20, 2008. Denny Lutheran Church and Denny Park on the right, construction cranes in the background. I counted 9 cranes from this view.
Whose Streets?
by Jacquelyn Hermer and Andrew Hedden

“From the places with plenty / to the space with no pity / forces changing our city / If I don’t change what’s been given / what can I say to my children / who going to be claiming this city?” –Macklemore & Abyssinian Creole, “Claimin’ the City”

Seattle today is a tale of two cities. For developers, government officials, and many new residents, Seattle is about its places of plenty: shopping opportunities, property values, beautiful views, and potential profits. Look beyond the skyscrapers and a different image of Seattle emerges: that of a blue-collar port city with an immigrant soul–a place of strength, survival, and struggle against racism and poverty. When these two Seattles collide, it’s called gentrification: the displacement of poor and working class people by upper-income residents. It’s a conflict over values, over purpose: who is claiming the city?

Before gentrification, there was Jim Crow segregation. The Central District (CD) was one of the few areas black residents could live. As they moved there, the predominately Jewish community fled. Now, with gentrification, white residents are returning. This dates back to the 1970s, when deindustrialization forced US cities to reorder their economies. Since then, Seattle officials have scrambled to build a profitable economy around those who don’t even live here: suburbanites, tourists, and international investors. In the 1990s alone, over $700 million in public money went to developers to build upper-class amenities like convention centers, museums, and retail stores, a decade that also saw the city lose large amounts of its working-class residents. [Ed. note: plus over $1 billion in new sports stadiums, “needed” primarily due to their lucrative luxury suites.]

The trend continues today, as rising housing prices push people of color further South–even out of Seattle altogether–and new sweeps on homeless encampments physically remove people from public property. Yet people are resisting across the city. In February, when the new South Lake Union Trolley was tagged with graffiti, it was not hard to see it as a statement against the city’s priorities and the millions of dollars spent on a trolley that goes nowhere except Paul Allen-owned real estate. But the resistance goes well beyond small isolated acts.

In Little Saigon, Seattle’s Vietnamese district, lies the Goodwill site on Dearborn St. and Rainer Ave. This prime piece of real estate is the location of a proposed new development, including retail space three-quarters the size of Northgate Mall and 550 housing units. Fearing the project threatens the vitality of their neighborhood, community members formed the Dearborn Street Coalition for Livable Neighborhoods. After several years of protest and pressure, they are now in negotiations with the developer to reach a Community Benefits Agreement (CBA) which would ensure good jobs, low-income housing, traffic mitigation, and support for Little Saigon are part of the development.

Elana Dix, an organizer with Puget Sound SAGE, one of the coalition’s 40 organizations, explains, “Reshaping how redevelopment and growth happens in the city is a good way to build a movement for workers.” According to Dix, the CBA is a potential model for other neighborhoods in the city threatened by harmful development. She also admits, though, the strategy is limited to instances where a large development is planned. If the Dearborn Coalition succeeds, it will represent a massive victory. But fighting gentrification in other areas proves harder if the forces changing the area cannot be attributed to a single site or developer.

“All I want to do is live quietly, take care of my property , pay my taxes, and listen to the Commodores at Red Apple when I buy groceries.” –anonymous new CD resident, blog post 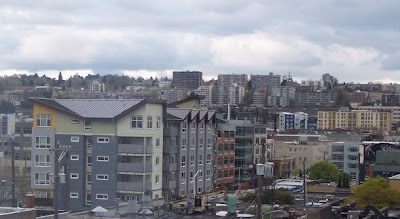 Also looking east from the Holiday Inn Dexter, but showing
the real business of Seattle gentrification a la condominium.