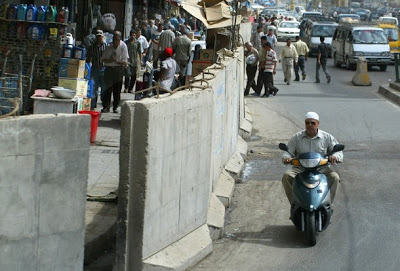 After all, the electricity isn’t that important, right? And we are especially fond of assassination from 10,000 miles away, thus reducing the numbers of US troop deaths and casualties. How humane, how civilised ….

Have you been feeling like me — like everything about our country in the waning months of the Bush administration, from the occupation of Iraq to the economy, is being held together with bailing wire? That the whole sorry mess has come down to (aside from stealing whatever items they can find that still haven’t been nailed down) trying to maintain just enough of the appearance of a functioning society that it will in the future be at least plausible to blame the ultimate collapse on the next president.

Well, if that’s how you’ve been feeling too, I’ve found some of the bailing wire: Miles upon miles upon miles of concrete blast walls — 10, even 20-feet high — that have turned the neighborhoods of Baghdad into a maze-like warren and the residents into laboratory rats.

They “block access to schools, mosques, churches, hotels, homes, markets and even entire neighborhoods — almost anything that could be attacked,” writes AP reporter Hamza Hendawi. “They have become the iconic symbol of the war.”

This is how the surge is “working.”

“Rows after rows of barrier walls divide the city into smaller and smaller areas that protect people from bombings, sniper fire and kidnappings,” Hendawi writes. “They also lead to gridlock, rising prices for food and homes, and complaints about living in what feels like a prison.

“Baghdad’s walls are everywhere. They have turned a riverside capital of leafy neighborhoods and palm-lined boulevards into a city of shadows that separate Sunnis from Shiites.”

Eighteen months ago, President Bush was in a world of hurt. The centerpiece of his presidency, the Iraq war, was on the brink of collapse, both on the ground over there and politically over here. Order had to be restored. They called it a surge, and we did send some more troops, but it was an incremental increase. It turns out the surge was mostly in these walls. Prisons can be useful in restoring order to a lawless society, but let’s face it, 25 million is a lot of people. So if you can’t imprison the nation, you turn the nation into a prison.

“The wall came to make us suffer,” said Waleed Mahmoud, a 35-year-old father of four, told the AP. “It takes my children an hour to get to school. I am often late for work, and there is never fewer than 10 cars in the line at the two crossing points.”

But he is less likely the be blown up than a year ago, and that’s something. From 2,000 civilian deaths a month to some 500 (just estimates of course — we don’t do body counts, except when we do, but it’s too dangerous for any journalist to go to the morgue and double-check, in any case). Yes, this is also how the surge is “working.” To adjust for the two countries’ sizes, multiply by 12 or so, and just think if the US was suffering just two 9/11’s per month — every month — instead of two per week — every week. Just think how much better that would be. Think how normal that would seem. Think how relieved we would feel.

But even with the decline in violence, such as it is, it’s still not quite business as usual. In Azamiyeh, Baghdad’s most famous Sunni district and one of the first to be walled, about half of the neighborhood’s residents have fled, leaving not enough locals to support its once-popular clothing stores, while Shi’ites from other parts of Baghdad are afraid to run the checkpoints necessary to come there to shop.

And there’s plenty else that hasn’t returned to normal either. Electricity is still no more than an hour or two a day. The sewage system is still collapsed. The water is not sanitary enough to bathe in, much less drink. All the money is going into blast walls — the last-ditch, desperate throw of the dice to get a handle on the violence.

“Now banks, the courts and even the markets are surrounded by walls, not to speak of military camps and police stations,” Iraqi contractor Yassir Jadu told Ammar Karim of Agence France Presse last fall. “If we measure the money spent on building blast walls you will find that it is more than that spent on fuel, electricity and other services. About 99 percent of Iraq’s budget is going towards building walls.”

As an example Jaddu said it cost $1.25 million just to buy the 2,500 concrete pieces needed to ring a single Baghdad police station. He could have bought them for only $1 million, but he is a Sunni, and the concrete plant is in a Shi’ite neighborhood, so he had to hire a go-between to buy the 3-meter-high, 5-ton pieces of concrete, adding $100 to the cost of each piece.

The surge has “worked” not only with walls, of course. God only knows how much money is being paid off to who in the financial black hole this occupation has become. $162 billion more, and so much will simply disappear, news that billions can’t be accounted for is scarcely considered newsworthy. The Iraqi official responsible for fighting corruption had to flee the country or be killed.

“In the past, notices would be published in the gazette calling for tenders,” says Sinan, another Iraqi contractor too frightened to state his full name. “Now officials just phone their friends and offer them the work.”

And then there are the drones, aircraft equipped with cameras and guided missiles which tend to keep our casualties down because the “pilot” is on an air force base in Las Vegas. We have hundreds of them in Iraq now, and their missions have doubled since the beginning of the surge. For us, it means fewer casualties. For an Iraqi, it means every day contains at least the slight chance, if you’re in the wrong place at the wrong time, your life could be extinguished without warning by someone who in 15 minutes will be unwinding in front of a slot machine 8,000 miles away.

So this is what Operation Iraqi Freedom has come to mean: A society kept under lockdown, with the hope the American public will buy it as “success” as long as casualties can be kept lower than they were before. And they may be right, given that the public receives too little news like these reports from Iraqi stringers and activists. Coverage on the evening news is down to two minutes per week — counting all three networks — according to a recent study, and given that such reporting as there is must be done in the presence of “minders” from the American military — it’s simply still too dangerous to do any other kind of story — the public would probably be better informed if they didn’t receive even that. It seems to be progress enough to satisfy Congress, anyway.

But it can’t be sustained forever, just as a prison can’t be kept in lockdown forever. At some point, you need the inmates’ cooperation. Constant coercion is simply too expensive, and how much has it been now? $600 billion? $700 billion? There are websites you can go to to look it up, but by the time you finish typing the number, it’s gone up another $10 million. And the bailing wire holding together the American economy is beginning to fray under the strain.

It’s almost enough to make me want to see John McCain win the election, since he so proudly claims authorship of this surge and so wants us to believe it’s “working.” When George Bush finally returns the keys to the car he so cavalierly took joyriding — you’ll find it down the street, wrapped around a tree — let it be to John McCain.

[Gregg Gordon is a writer, musician, activist, and otherwise ne’er-do-well in Columbus, Ohio.]