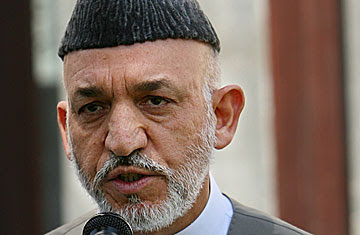 KANDAHAR, AFGHANISTAN — Afghan President Hamid Karzai made an immediate demand of Barack Obama on Wednesday, saying the U.S. president-elect must prevent civilian casualties as Afghan villagers alleged that air strikes killed or wounded dozens of women and children in a wedding party.

No Afghan officials could immediately confirm the number of alleged casualties, but Mr. Karzai referred to the incident at a news conference held to congratulate Mr. Obama on his U.S. presidential election victory.

Mr. Karzai said he hopes the election will “bring peace to Afghanistan, life to Afghanistan and prosperity to the Afghan people and the rest of the world.” He applauded America for its “courage” in electing Mr. Obama.

But he also used the occasion to immediately press Mr. Obama to find a way to prevent civilians casualties in operations by foreign forces. He then said air strikes had caused deaths in the Shah Wali Kot district of Kandahar province.

“Our demand is that there will be no civilian casualties in Afghanistan. We cannot win the fight against terrorism with air strikes,” Mr. Karzai said. “This is my first demand of the new president of the United States — to put an end to civilian casualties.”

The U.S. military said it had no immediate information on the incident. Canadian ground troops operate in the region, but it was known if Canada’s military had any involvement.

The alleged air strikes come only three months after the Afghan government found that a U.S. operation killed some 90 civilians in western Afghanistan. A U.S. report said 33 civilians died in that attack.

Another incident with a high number of civilian casualties could severely strain U.S.-Afghan relations.

Civilian deaths have long caused friction between Mr. Karzai’s government and the U.S. and NATO. But following the U.S. operation in western Afghanistan in August, relations between Afghanistan and the United States were seriously damaged. Mr. Karzai called for a review of operations by U.S. forces in Afghan villages.

An Afghan government commission found the Aug. 22 attack on the village of Aziziabad killed some 90 Afghan civilians — a finding backed by a preliminary United Nations report. The U.S. military at first said only 30 militants were killed and no civilians. But days later the military said up to seven civilians had died.

However, after video of Aziziabad emerged days later showing what appeared to be dozens of bodies, the U.S. appointed a U.S.-based one-star general to investigate. His report found the U.S. operation killed 33 civilians. The report said U.S. troops were justified in firing on the village because militants had first fired on them and wounded a U.S. soldier.

Here’s what caused this request from Hamid Karzai: 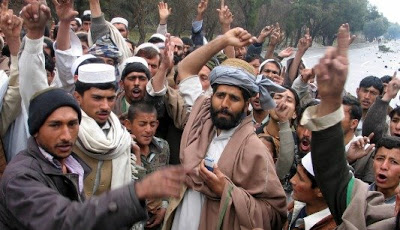 KANDAHAR, AFGHANISTAN — Dozens of Afghan civilians are dead and dozens more are wounded after a series of air strikes aimed at Taliban fighters fell short of their target and exploded in the middle of a wedding party in a mountainous region north of Kandahar city, tribal elders and wedding guests told The Globe and Mail on Tuesday.

Survivors of the attacks, which occurred in the village of Wech Baghtu in the district of Shah Wali Kowt on Monday evening, said the majority of the dead and injured were women – the bombs struck while male and female wedding guests were segregated, as is customary in Kandahar province.

They said the bodies of at least 36 women have been identified, and hundreds more men and women have been injured. Local leaders have yet to establish a firm casualty count because many of the victims remain buried beneath rubble, said Abdul Hakim Khan, a tribal elder from the district.

In interviews at Mirwais Hospital in Kandahar city, where at least 16 male victims and dozens of female victims were being treated Tuesday night, several villagers described the attack. While Mr. Khan corroborated much of the information witnesses gave during a separate interview, it was not possible to independently verify their account or the numbers of dead and injured they gave.

Witnesses gave conflicting statements about the identity of troops who arrived at the scene after the air attacks, with some saying they saw Canadian soldiers while others said they saw U.S. troops.

It was not immediately clear which international forces were responsible for the air strikes.

A Canadian military source denied that Canada, which has responsibility for Kandahar province, had any involvement. “Task Force Kandahar has not been in any significant military engagement in Shah Vali Kowt in the last two days,” the source said.

The sparsely populated mountainous region surrounding the village is a known Taliban stronghold. In the past the area has been a target of various anti-insurgent special operations.

Mr. Khan said his village is situated at the foot of a mountain frequented by Taliban insurgents. At the time of the wedding, insurgents on the mountain had attempted to attack troops in the area with an improvised explosive device, Mr. Khan said. Fighting broke out between troops and insurgents after the Taliban began firing from the top of the mountain, which triggered the air strike, he said.

Abdul Zahir, 24, the brother of the bride, said fighting broke out between Taliban and international troops near a crossroads in the village early on Monday. Wedding guests first heard shots from the mountain about 4 p.m. Air strikes followed about half an hour later and lasted about five hours, he said.

While Mr. Zahir was not injured, his sister was severely hurt, as were three of his young cousins, Noor Ahmad, Hazrat Sadiq and Mohammad Rafiq, who range in age from three to five years old. During the interview, they lay sprawled out next to him on tiny hospital cots. Mr. Zahir said that in all eight members of his family were killed, including two of his brothers, Qahir and Twahir, and his grandmother. Fourteen other family members were injured.

The bombing wasn’t the end of the ordeal, witnesses said. When the air strikes were over, they said, international troops arrived in three sand-coloured armoured vehicles.

Villagers reported they were intimidated and prevented from leaving to seek medical treatment while the soldiers took pictures.

The governor of Kandahar province will hold a press conference on the incident Wednesday morning, a spokesman said.

“We are collecting information right now about this incident. It’s not complete,” the spokesman said.

Alex Strick van Linschoten is a freelancer based in Kandahar