Or the Right of the People Peaceably to Assemble 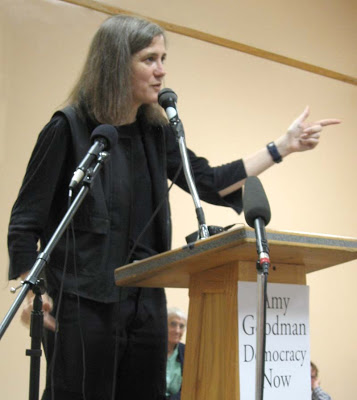 Why We Were Falsely Arrested
By Amy Goodman / September 3, 2008

ST. PAUL, Minn.—Government crackdowns on journalists are a true threat to democracy. As the Republican National Convention meets in St. Paul, Minn., this week, police are systematically targeting journalists. I was arrested with my two colleagues, “Democracy Now!” producers Sharif Abdel Kouddous and Nicole Salazar, while reporting on the first day of the RNC. I have been wrongly charged with a misdemeanor. My co-workers, who were simply reporting, may be charged with felony riot.

The Democratic and Republican national conventions have become very expensive and protracted acts of political theater, essentially four-day-long advertisements for the major presidential candidates. Outside the fences, they have become major gatherings for grass-roots movements—for people to come, amidst the banners, bunting, flags and confetti, to express the rights enumerated in the Constitution’s First Amendment: “Congress shall make no law respecting an establishment of religion, or prohibiting the free exercise thereof; or abridging the freedom of speech, or of the press, or the right of the people peaceably to assemble, and to petition the Government for a redress of grievances.”

Behind all the patriotic hyperbole that accompanies the conventions, and the thousands of journalists and media workers who arrive to cover the staged events, there are serious violations of the basic right of freedom of the press. Here on the streets of St. Paul, the press is free to report on the official proceedings of the RNC, but not to report on the police violence and mass arrests directed at those who have come to petition their government, to protest.

It was Labor Day, and there was an anti-war march, with a huge turnout, with local families, students, veterans and people from around the country gathered to oppose the war. The protesters greatly outnumbered the Republican delegates.

There was a positive, festive feeling, coupled with a growing anxiety about the course that Hurricane Gustav was taking, and whether New Orleans would be devastated anew. Later in the day, there was a splinter march. The police—clad in full body armor, with helmets, face shields, batons and canisters of pepper spray—charged. They forced marchers, onlookers and working journalists into a nearby parking lot, then surrounded the people and began handcuffing them.

Nicole was videotaping. Her tape of her own violent arrest is chilling. Police in riot gear charged her, yelling, “Get down on your face.” You hear her voice, clearly and repeatedly announcing “Press! Press! Where are we supposed to go?” She was trapped between parked cars. The camera drops to the pavement amidst Nicole’s screams of pain. Her face was smashed into the pavement, and she was bleeding from the nose, with the heavy officer with a boot or knee on her back. Another officer was pulling on her leg. Sharif was thrown up against the wall and kicked in the chest, and he was bleeding from his arm.

I was at the Xcel Center on the convention floor, interviewing delegates. I had just made it to the Minnesota delegation when I got a call on my cell phone with news that Sharif and Nicole were being bloody arrested, in every sense. Filmmaker Rick Rowley of Big Noise Films and I raced on foot to the scene. Out of breath, we arrived at the parking lot. I went up to the line of riot police and asked to speak to a commanding officer, saying that they had arrested accredited journalists.

Within seconds, they grabbed me, pulled me behind the police line and forcibly twisted my arms behind my back and handcuffed me, the rigid plastic cuffs digging into my wrists. I saw Sharif, his arm bloody, his credentials hanging from his neck. I repeated we were accredited journalists, whereupon a Secret Service agent came over and ripped my convention credential from my neck. I was taken to the St. Paul police garage where cages were set up for protesters. I was charged with obstruction of a peace officer. Nicole and Sharif were taken to jail, facing riot charges.

The attack on and arrest of me and the “Democracy Now!” producers was not an isolated event. A video group called I-Witness Video was raided two days earlier. Another video documentary group, the Glass Bead Collective, was detained, with its computers and video cameras confiscated. On Wednesday, I-Witness Video was again raided, forced out of its office location. When I asked St. Paul Police Chief John Harrington how reporters are to operate in this atmosphere, he suggested, “By embedding reporters in our mobile field force.”

On Monday night, hours after we were arrested, after much public outcry, Nicole, Sharif and I were released. That was our Labor Day. It’s all in a day’s work.

This entry was posted in RagBlog and tagged Freedom of Press, Police Brutality, Police State. Bookmark the permalink.