Our Reputation in the World Is in the Toilet 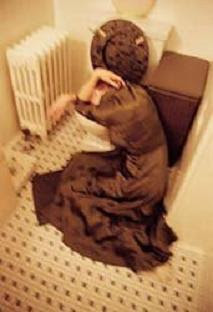 Happy Anniversary, America! How Lethally Stupid Can One Country Be?
By David Michael Green

24/03/08 “ICH” — — Watching George W. Bush in operation these last couple of weeks is like having an out-of-body experience. On acid. During a nightmare. In a different galaxy.

As he presides over the latest disaster of his administration, (No, it’s not a terrorist attack – that was 2001! No, it’s not a catastrophic war – that was 2003! No, it’s not a drowning city – that was 2005! This one is an economic meltdown, ladies and gentlemen!) bringing to it the same blithe disengagement with which he’s attended the previous ones, you cannot but stop and gaze in stark, comedic awe, realizing that the most powerful polity that ever existed on the planet twice picked this imbecilic buffoon as its leader, from among 300 million other choices. Seeing him clown with the Washington press corps yet once again – and seeing them fawn over him, laugh in all the right places, and give him a standing ovation, also yet once again – is the equivalent of having all your logic circuits blown simultaneously. Truly, the universe has a twisted and deeply ironic sense of humor. Monty Python is about as funny – and as stiff – as Dick Nixon, by comparison.

It’s simply incomprehensible. It’s not so astonishing, of course, that a country could have a bad leader whose aims are nefarious on the occasions when they are competent enough to rise to that level of intentionality. Plenty of countries have managed that feat, especially when – as was the case with Bush – every sort of scam is employed to steal power, and then pure corruption and intimidation used to keep it. History is quite littered indeed with bimbos and petty criminals of this caliber. What is harder to explain is how a country of such remarkable achievements in other domains, and with the capacity to choose, and in the twenty-first century no less, allows this to happen. And then stands by silently watching for eight years as the tragedy unfolds before their eyes, all 600 million of them, hardly any of them even blinking.

And so, remarkably, as we mark now the fifth anniversary of the very most tragic of these debacles, the most destructive and the most shameful – because it was the most avoidable – the sad question of the hour is less what is to be done about it than will anyone even notice? Not likely. And not for very long if they do. And, most of all, definitely not enough so as to take meaningful action to bring it to an end, even at this absurdly late date.

But let’s give credit where credit is due. This is precisely by design. This is exactly the outcome intended by the greatest propaganda-promulgating regime since Hermann Göring set fire to the Reichstag. It was Göring himself who famously reminded us that, “Naturally the common people don’t want war; neither in Russia, nor in England, nor in America, nor in Germany. That is understood. But after all, it is the leaders of the country who determine policy, and it is always a simple matter to drag the people along, whether it is a democracy, or a fascist dictatorship, or a parliament, or a communist dictatorship. …Voice or no voice, the people can always be brought to the bidding of the leaders. That is easy. All you have to do is to tell them they are being attacked, and denounce the pacifists for lack of patriotism and exposing the country to danger. It works the same in any country.”

Sure worked in Germany. And it worked even better here, because these guys were so absolutely careful to avoid exposing the costs of their war to those who could demand its end. For example, by some counts, there are more mercenaries fighting in Iraq, at extremely high cost, than there are US military personnel. There’s only one reason for that. If the administration implemented the draft that is actually necessary to supply this war with adequate personnel, the public would end both the war and the careers of its sponsors, post haste. For the same reason, this is the first American war ever which has not only not been accompanied by a tax increase, but has in fact witnessed a tax cut. Likewise – to ‘preserve the dignity’ of the dead, of course – you are no longer permitted to see photographs of flag-draped caskets returning to Dover Air Force Base.

And the press are embedded with forces who are also responsible for their safety, which is just a fancy way of saying that they’re so censored they make Pravda look good. It is, in short, quite easy for average Americans to get through their day, every day, without the war impacting their lives in any visible respect, and that is precisely what hundreds of millions of us are doing, week in and week out. All of this is courtesy of an administration that couldn’t run a governmental program to save its own life – but, boy, they sure as hell know how to market stuff.

This entry was posted in RagBlog and tagged Bush, The World, U.S. Government. Bookmark the permalink.