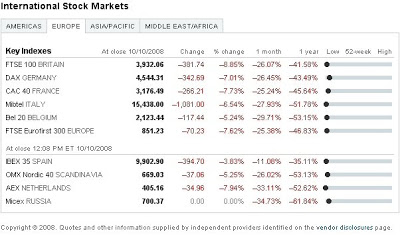 Source, and for additional information about the market free-fall.
A Solution?
By Paul Craig Roberts / October 10, 2008

Readers have been pressing for a solution to the financial crisis. But first it is necessary to understand the problem. Here is the problem as I see it. If my diagnosis is correct, the solution below might be appropriate.

Countries don’t put these dollars in a mattress. They invest them. They buy up US companies, real estate, and toll roads. They also purchase US financial assets. They finance the US government budget deficit by purchasing Treasury bonds and bills. They help to finance the US mortgage market by purchasing Fannie Mae and Freddie Mac bonds. They buy financial instruments, such as mortgage-backed securities and other derivatives, from US investment banks, and that is how the US financial crisis was spread abroad. If the US current account was close to balance, the contagion would have lacked a mechanism by which to spread.

One reason the US trade deficit is so large is the practice of US corporations offshoring their production of goods and services for US markets. When these products are brought into the US to be sold, they count as imports.

Thus, economists were wrong to see the trade deficit as a non-problem and to regard offshoring as a plus for the US economy.

The fact that much of the financial world is polluted with US toxic financial instruments could affect the ability of the US Treasury to borrow the money to finance the bailout of the financial institutions. Foreign central banks might need their reserves to bail out their own financial systems. As the US savings rate is approximately zero, the only alternative to foreign borrowing is the printing of money.

Financial deregulation was an important factor in the development of the crisis. The most reckless deregulation occurred in 1999, 2000, and 2004. See Roberts, “The End of American Hegemony.”

Lax mortgage lending policies grew out of pressures placed on mortgage lenders during the 1990s by the US Department of Justice and federal regulatory agencies to race-norm their mortgage lending and to provide below-market loans to preferred minorities. Subprime mortgages became a potential systemic threat when issuers ceased to bear any risk by selling the mortgages, which were then amalgamated with other mortgages and became collateral for mortgage-backed securities.

Wall Street analysts pushed financial institutions to increase their earnings, which they did by leveraging their assets and by insuring debt instruments instead of maintaining appropriate reserves. This spread the crisis from banks to insurance companies.

Finance chiefs around the world are dealing with the crisis by bailing out banks and by lowering interest rates. This suggests that the authorities see the problem as a solvency problem for the financial institutions and as a liquidity problem. US Treasury Secretary Paulson’s solution, for example, leaves unattended the continuing mortgage defaults and foreclosures. The fall in the US stock market predicts a serious recession, which means rising unemployment and more defaults and foreclosures.

In place of a liquidity problem, I see an over-abundance of debt instruments relative to wealth. A fractional reserve banking system based on fiat money appears to be capable of creating debt instruments faster than an economy can create real wealth. Add in credit card debt, stocks purchased on margin, and leveraged derivatives, and debt is pyramided relative to real assets.

Add in the mark-to-market rule, which forces troubled assets to be under-valued, thus threatening the solvency of institutions, and short-selling, which drives down the shares of troubled institutions, thereby depriving them of credit lines, and you have an outline of the many causes of the current crisis.

If the diagnosis is correct, the solution is multifaceted.

The financial markets must be carefully re-regulated, not over-regulated or wrongly regulated.

To shore up the credibility of the US Treasury’s own credit rating and the US dollar as world reserve currency, the US budget and trade deficits must be addressed. The US budget deficit can be eliminated by halting the Bush Regime’s gratuitous wars and by cutting the extravagant US military budget. The US spends more on military than the rest of the world combined. This is insane and unaffordable. A balanced budget is a signal to the world that the US government is serious and is taking measures to reduce its demand on the supply of world savings.

The trade deficit is more difficult to reduce as the US has stupidly permitted itself to become dependent not merely on imports of foreign energy, but also on imports of foreign manufactured goods including advanced technology products. Steps can be taken to bring home the offshored production of US goods for US markets. This would substantially reduce the trade deficit and, thus, restore credibility to the US dollar as world reserve currency. Follow-up measures would be required to insure that US imports do not greatly exceed exports.

The US will have to set aside the racial privileges that federal bureaucrats pulled out of the Civil Rights Act and restore sound lending practices. It the US government itself wishes to subsidize at taxpayer expense home purchases by non-qualified buyers, that is a political decision subject to electoral ratification. But the US government must cease to force private lenders to breech the standards of prudence.

The issuance of credit cards must be brought back to prudent standards, with checks on credit history, employment, and income. Balances that grow over time must be seen as a problem against which reserves must be provided, instead of a source of rising interest income to the credit card companies.

Fractional reserve banking must be reined in by higher reserve requirements, rising over time perhaps to 100 percent. If banks were true financial intermediaries, they would not have money creating power, and the proliferation of debt relative to wealth would be reduced.

Does the US have the leadership to realize the problem and to deal with it?

Not if Bush, Cheney, Paulson, Bernanke, McCain and Obama are the best leadership that America can produce.

The Great Depression lasted a decade because the authorities were unable to comprehend that the Federal Reserve had allowed the supply of money to shrink. The shrunken money supply could not employ the same number of workers at the same wages, and it could not purchase the same amount of goods and service at the same prices. Thus, prices and employment fell.

The explanation of the Great Depression was not known until the 1960s when Milton Friedman and Anna Schwartz published their Monetary History of the United States. Given the stupidity of our leadership and the stupidity of so many of our economists, we may learn what happened to us this year in 2038, three decades from now.

This entry was posted in RagBlog and tagged Economic Collapse, Financial Crisis. Bookmark the permalink.