Pelosi Slips Impeachment Onto the Table 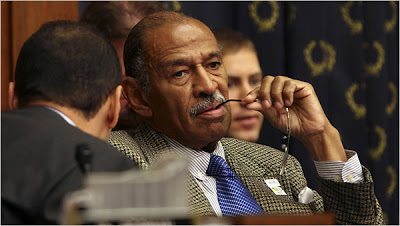 With the door opened, Judiciary chair John Conyers may press for action.
Door may be open for Kucinich’s resolution on Bush
By John Nichols / July 10, 2008

As Ohio Congressman Dennis Kucinich moved a “privileged resolution” to force House to consider the question of whether President Bush should be impeached for lying to Congress and the American people about the reasons for invading and occupying Iraq, House Speaker Nancy Pelosi surprised almost everyone by suggesting that the Judiciary Committee might indeed take up the issue.

Pelosi, who famously declared impeachment to be “off the table” before the 2006 election, now suggests that hearings on the president’s high crimes and misdemeanors are a distinct possibility.

“My expectation is that there will be some review of that in the committee,” the California Democrat told reporters Thursday.

The speaker was not suggesting that members of the Judiciary panel would be voting anytime soon on formal impeachment resolutions. Pelosi said she did “not necessarily (see the committee) taking up the articles of impeachment because that would have to be approved on the floor, but to have some hearings on the subject.”

Judiciary Committee chair John Conyers, D-Michigan, has indicated that he is reviewing the 35 articles of impeachment Kucinich has proposed for President Bush. He has not indicated, however, whether he intends to hold hearings on any of them or on broads questions of whether violations of their oaths of office, the Constitutionally-defined separation of powers and the laws of the land by the president and Vice President Dick Cheney — the subject of three impeachment articles submitted by Kucinich — should be addressed by Congress.

It is no secret that Conyers has felt constrained by Pelosi’s “off-the-table” commitment.

Whether her new line opens the door for hearings before the end of the Bush-Cheney presidency remains to be seen.

But Pelosi’s remarks do create an opening for the members of the Judiciary Committee, including Florida Democrat Bob Wexler and Wisconsin Democrat Tammy Baldwin, who have co-sponsored Kucinich’s articles of impeachment and who have urged the committee to open hearings on issues of presidential accountability.

For his part, Kucinich will keep pressing for action.

“Congress must, in the name of the American people, use the one remedy which the Founders provided for an Executive who gravely abused his power: Impeachment. Congress must reassert itself as a co-equal branch of government; bring this President to an accounting, and in doing so reestablish the people’s trust in Congress and in our United States system of government. We must not let this President’s conduct go unchallenged and thereby create a precedent which undermines the Constitution,” the Ohio congressman said Thursday, as he prepared to introduce his privileged resolution to force consideration of impeachment of a president who he accuses of “deceiving Congress with fabricated threats of Iraq WMDs to fraudulently obtain support for an authorization of the use of military force against Iraq.”.

“In the final analysis this is about our Constitution and whether a President can be held accountable for his actions and his deceptions, especially when the effects of those actions have been so calamitous for America, Iraq and the world. Unless Congress reasserts itself as the power branch of government which the Founders intended, our experiment with a republican form of Government may be nearing an end. But when Congress acts to hold this President accountable it will be redeeming the faith that the Founders had in the power of a system of checks and balances which preserves our republic.”

2 Responses to Pelosi Slips Impeachment Onto the Table