Perspectives on the Iraqi Oil Industry 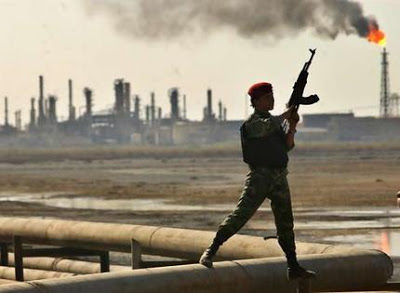 Political gridlock has overtaken security risk as the primary hurdle facing the rehabilitation of Iraq’s oil industry, according to oil executives and analysts.

Charles Ries, US co-ordinator for Iraq’s economic transition, recently told reporters that the short-term contracts, which would train and assist Iraqi engineers to raise oil output, now at 2.4m barrels a day, by an extra 500,000 b/d, were not likely to go through.

Anadarko, the US independent, has walked away from the short-term deals on offer, citing unfavourable terms. Others, including BP and Royal Dutch Shell, say talks are continuing. However, analysts have suggested no agreement is likely before the end of Ramadan, putting any deals off until at least October.

In its most recent report, the International Energy Agency, the oil consuming countries’ watchdog, said it might have to revise down its forecasts of Iraqi capacity expansions because of doubts over the technical support contracts.

Oil executives said the deals had been mired in confusion. Some said the agreements on offer had lost much of their appeal when Iraq reduced the contracts’ lengths from two years to one, and when it became clear Iraq would not give companies that signed short-term contracts preferential treatment for the more sought-after long-term deals.

International oil companies are far from shrugging off their security concerns over sending large numbers of employees to Iraq. Shell, for example, conducts all its work on Iraq outside the country, advising and training Iraqi staff working on the Kirkuk and Missan oilfields, and working on plans to use the gas produced as a byproduct of oil extraction and burned off in flares.

But at least one western energy group is becoming bolder. Eni, the Italian oil company, recently sent its head of exploration and production and its head of oil and gas for a visit.

For Eni and other big companies, the ultimate prize would be longer-term deals that allowed them to produce oil from Iraq’s huge fields, and seek more fields in the unexplored areas.

The country’s oil ministry wants to sign field development deals as early as next year, and has said it will reveal terms next month.

But companies are still concerned at the lack of new legislation governing the industry. Moves to agree on a new law have been derailed amid disagreements between the Kurdish minority and the Arab majority.

Meanwhile, China National Petroleum Corporation, the state-owned oil company that is the parent of the listed Petrochina group, may be the first foreign company to sign an oil deal with Baghdad since the fall of Saddam Hussein: a service contract to develop the Ahdab field.

Hussein Shahristani, Iraq’s oil minister, was quoted in an Iraqi newspaper on Tuesday as saying that a $1.2bn (€817m, £644m) deal with China had been under discussion for a year.

CNPC refused to comment, but an industry official in Beijing confirmed the talks were taking place with the Iraqi authorities, and that an Iraqi minister was expected to visit Beijing next week.

“Foreign companies, including Russian companies, have not taken up the call to develop these projects. As a result of them not wanting to work in these conditions, the Iraqi people have suffered greatly,” Karim Waheed, Iraq’s electricity minister, said at a news conference in Moscow.

The attack came after Iraq delayed the signing of short-term oil service contracts with oil majors due to disagreements over payment terms and their duration.

Iraq and major international oil companies have been negotiating six short-term technical service contracts, each worth about $500 million and targeting a 100,000 barrels per day increase in output from six of Iraq’s biggest oilfields.

The companies involved in negotiations included Royal Dutch Shell (RDSa.L: Quote, Profile, Research, Stock Buzz) and Exxon Mobil (XOM.N: Quote, Profile, Research, Stock Buzz). The firms, jostling for years to position themselves for access to the world’s third-largest oil reserves, had hoped that the contracts would give them a headstart in negotiations for future deals.

“The invitations to take part in these projects have not only an economic but a humanitarian character,” Waheed said after meetings with Russian energy minister Sergei Shmatko and the heads of Russian energy service firms.

In negotiating deals, foreign majors had counted on Iraq’s ignorance of the markets in trying to overcharge the country in a time of need, the Iraqi minister said.

“Some companies in those cases demanded sky-high prices for their services, thinking Iraq does not have a grasp of international financial markets. They were unpleasantly surprised when they found out we fully understand global commodity markets and global stock markets,” he said.

LUKOIL signed the $4 billion West Qurna deal with the government of Iraq’s former dictator, Saddam Hussein, over a decade ago but Baghdad scrapped the deal shortly before Hussein was deposed by a U.S. invasion in 2003.

“These contracts are old in many ways. Firstly the price of metals and other building materials has increased dramatically, not to mention the price of oil…” Waheed said.