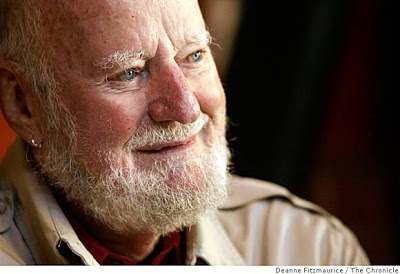 ‘Oldies such as myself talk about the good old days with nostalgia since that was when they were young and beautiful (and full of testosterone).’ — Lawrence Ferlinghetti

SAN FRANCISCO — On Tuesday [March 24], poet Lawrence Ferlinghetti turns 90. Nearly 60 years ago, he came to San Francisco, fell in love with this “small white city,” and soon after co-founded City Lights Books. One of the most vibrant and long-lived cultural institutions in town, the store remains an international magnet for the imaginative, as does the Web site for City Lights Booksellers & Publishers, Citylights.com

Mayor Gavin Newsom has declared that March 24 will henceforth be called “Lawrence Ferlinghetti Day,” in honor of his “enormous contributions to our city’s life and culture,” while the bookstore staff invites everyone to send along birthday wishes, via e-mail, to: lfbirthday@citylights.com.

Q: When you were named San Francisco’s first poet laureate in 1998, you spoke of the damage to the culture caused by the yawning gap between the city’s rich and poor. Have your worst fears been borne out?

A: When I arrived in the city, the citizens seemed to have an island, considering San Francisco a kind of offshore republic, founded by gold miners and gold diggers, cast-off seamen and vagabonds, railroad barons and rogue adventurers and ladies of fortune. What with the electronic revolution and the Information Age, we have joined the rest of the world.

Oldies such as myself talk about the good old days with nostalgia since that was when they were young and beautiful (and full of testosterone).

Q: You served as a ship’s commander in the Pacific during World War II. What’s the most important thing you learned in the Navy?

A: In four years at sea, I learned that the sea is a monster and can turn on you at any time. Seeing Nagasaki made me an instant pacifist.

Q: How have the concerns of poets changed since you began writing?

A: In the social revolution of the 1960s, the chant was “Be here now.” Today with television, e-mail and especially cell phones, it’s “Be somewhere else now.”

A: Walt Whitman, of course. He gave voice to the people and articulated an American populist consciousness.

Q: Why do you prefer the term wide-open poetry to Beat poetry?

A: I never wrote “Beat” poetry. Wide-open poetry refers to what Pablo Neruda told me in Cuba in 1950 at the beginning of the Fidelista revolution: Neruda said, “I love your wide-open poetry.”

He was either referring to the wide-ranging content of my poetry, or, in a different mode, to the poetry of the Beats. Wide-open poetry also refers to the “open form” typography of a poem on the page. (A term borrowed from the gestural painting of the Abstract Expressionists.)

Q: Can writing be taught?

Q: You’ve always been an activist, as well as an artist. What do you advise activists who are complacent now that a new, seemingly more enlightened administration is in charge?

A: The dictatorial reign of George the Second almost destroyed our civil liberties as well as our economy.

We shall now see whether an “enlightened” administration can defeat Washington, D.C.,’s culture of corruption. The press has given socialism a bad name, falsely equating it with Soviet Communism. What is needed today is a form of civil libertarian socialism in which all democratic civil rights are fully protected.

What with shrinking energy resources and radical climate change, a worldwide planned economy is needed. Why won’t any politician even whisper it?

Q: In the upcoming film of “Howl,” James Franco will play Allen Ginsberg. Who is playing you?

Q: Who is the love of your life?

A: Life itself is the love of my life.

Q: What’s the secret of your beautiful skin?

Thanks to Mariann Wizard and Bob Simmons / The Rag Blog