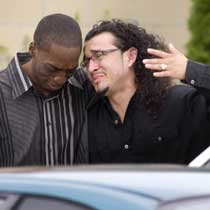 Mourners at Fredy Villanueva’s funeral
No Justice, No Peace: Behind the riots in Montreal after the shooting-death of Fredy Villanueva
By Charles Mostoller / August 23, 2008

MONTREAL-NORD, Montreal–“Why four gunshots? Why?”, asked Patricia Villanueva. “I don’t believe they had reason to shoot four times, just like that. Nothing justifies a death.” Patricia is sister to Fredy Villanueva, an 18 year old Honduran youth who was shot dead by a Montreal police officer on August 9th, sparking a small riot among the fed-up youth of this impoverished immigrant neighborhood in North Montreal.

Villanueva is the latest death in a long line of police killings here in Montreal, although the first to occur in this North Montreal neighborhood.

According to police, two officers approached a group of youths who were playing dice in a park, and attempted to arrest Dany Villanueva, Fredy’s brother. When an argument broke out, one officer fired four shots, killing Fredy and injuring Denis Meas and Jeffrey Sagor Metelus, who are recovering in the hospital. Police have stated that the officers were attacked by a group of about 20 youths, despite statements from witnesses who say that only five or six people were present and that there was no physical confrontation.

“My brother said ‘What are you doing with my brother? Let go of him.’ Then I heard gunshots, and my brother fell to the ground,” said Dany, according to the CBC. According to statements by the Villanueva family, Dany has had some trouble with the law in the past, but Fredy was the ‘good’ son, doing well in school and staying away from drugs and trouble.

Although over 30 witnesses have already been questioned in relation to Villanueva’s death, the two police officers responsible for his death have yet to be questioned. His sister wants to know why.

“It’s so important to have a transparent investigation, to know what really happened,” she said. “But they haven’t taken the police officers’ testimony yet. What are they waiting for?” Despite the slow course of the internal police investigation, the Villanueva family hopes that Fredy’s death will finally make police on the island more responsible and less likely to resort to lethal force.

“We want this never to happen again,” said Patricia, speaking after a press conference on Friday. “If it happens once, it can happen again, and it has happened before.” The incident has sparked debate in the media and among politicians here, more over the supposed threat of street-gangs in the area than over the reckless use of force displayed by Montreal’s finest–with many, including Prime Minister Stephen Harper, suggesting the need to beef-up the police units in the area to crack down on gangs. However, Francois du Canal, a spokesperson for the Coalition Against Police Brutality (COBP), believes that the most pressing issue in Montreal’s poor neighborhoods is poverty, not gangs.

“They are treating everyone in the neighborhood like they are would-be gang members,” he said. “There is poverty and a lot of social problems in neighborhoods like Montreal-Nord, but instead of dealing with poverty–like by giving money to community groups–they give millions of dollars to cops.” Take a quick stroll through Montreal-Nord and this is immediately obvious. Local residents gather in front of the dilapidated housing buildings, while groups of five or six police officers patrol the sidewalks and teams of police cruisers line the corners. Many people feel intimidated by the heavy police presence, which has been a part of daily life since long before Villanueva’s death.

“There are too many police here,” said Kevin Garcia, a friend of the Villanueva family. “Caravans of 10 or 15 police cars will come into the neighborhood all of a sudden, and we feel very insecure, because it seems like anything can happen from one moment to the next. It makes us feel very intimidated to have so many police everywhere.” “It seems like they are here to provoke things,” he added. “They see a few young people, and even if there are little kids around, they approach them, trying to intimidate–or what are they looking for? They are provoking things, trying to take this to the next level.” However, it is unlikely that Villanueva’s killers will ever face justice, given the history of impunity for police officers in cases like this. Villanueva is the 43rd person to be killed by the Montreal Police in the last twenty years, yet only two police officers have ever faced charges for their actions–and were acquitted in both cases.

“They kill people, and they’re not even accused of any misdoing,” said Canal. “So they get away with it. That’s what we call impunity, and because of it, they know they can kill people, so they just keep on acting like they can do whatever they want.”

“They use harassment, intimidation and violence as tactics,” he added, “and things like this happen, because the politicians are too afraid to control the police more. And they will continue to happen if nothing happens to these cops.”

Surete du Quebec (SQ)–the Quebec provincial police who are leading the inquiry into Villanueva’s death–have promised “an investigation with impartiality, rigor, objectivity and rapidity,” according to SQ Lt. Francois Dore.

However, past investigations into fatal shooting by the Montreal Police suggest that we may never know what really happened on August 9th.

For example, in the case of Mohamed Anas Bennis–a youth killed in December of 2005 by a Montreal Police officer–the findings of the investigation into his death have still not been made public., two-and-a-half years later. Nor has the officer who killed Bennis, Yannick Bernier, been penalized.

“It’s always the same story,” said Canal. “The cops investigate themselves and there are no accusations, so we never really know what truly happened. The cops are not even suspended.”

In 1996, former SQ investigator Gaëtan Rivest told the COBP that an investigation into the death of Yvon Lafrance–killed by police in 1989–had been tampered with in order to protect the officer responsible, Dominic Chartier. According to the COBP, Rivest confirmed “that such practices are common within the different police services in Quebec.”

“So it really sends a message that the city and the government are backing the police,” said Canal, “even if they say they think about the family and all that. But they really seem more upset that there was a riot than the fact that the cops killed an unarmed youth.”

Communities like Montreal-Nord are fed up with the situation. The riot that happened the day after Villanueva’s death was probably just a release of the neighborhood youth’s pent-up anger, not an action organized by local ‘street gangs’.

“The only street gang around here is the police,” shouted Will Prosper, along with hundreds of other Montreal-Nord residents in front of the town’s municipal building on Wedensday night.

Local residents had gathered in the parking lot in front of Mayor Marcel Parent’s office, calling for an public investigation of Villanueva’s death and an end to police repression in Montreal.

Shouting “No justice, no peace! Disarm the police!” and “Enquête public!”, dozens of residents barged into a meeting the mayor was holding, and Prosper raucously called for the mayor himself to resign–for not trying to help lift Montreal-Nord out of poverty.

According to Prosper, unemployment among youths has skyrocketed under Mayor Parent , and police abuse has gone unchecked.

“These people want jobs, houses, families–and are tired of police harassment,” he said. “If you don’t give them some options, what are they going to do?”

Both Prosper and Canal feel that in a poor neighborhood like Montreal-Nord, the police just exacerbate the problem.

“The police are not here to help people, they’re here to criminalize people and then they do things like killing people,” said Canal. “This makes it so that everybody in the community feels alienated–like they are being unjustly treated–and that’s one of the reasons why an explosion like the one we saw after the killing of Fredy Villanueva happened.”

In the end, police brutality towards immigrants seems like a systemic problem in Montreal, and one that won’t be going away soon. According to Prosper, minorities are twice as likely to be shot by police in Montreal, and poor immigrant neighborhoods like Montreal-Nord are overrun by police officers.

“They have a gang mentality,” he said. “A lot of police are good officers, but they tolerate abuses by other police officers. How come they don’t say anything about that? They ask the population to anonymously denounce criminals, but then they let criminals in their own ranks.”

“If we could respect the police, the riot wouldn’t have happened. But right now,” he continued, “there’s no trust, no respect. We know what happened that night, and that’s why we want change.”

The political response to police killings is to criminalize immigrant communities and victimize the police, sending in more police to fight against street gangs–in other words, young people. Until less money is spent on police in poor neighborhoods and more is spent on community programs, Canal explained, the vicious cycle that has led to so many deaths at the hands of police will probably continue.

This entry was posted in RagBlog and tagged Canada, Police Brutality, Police Tactics. Bookmark the permalink.