US Arrogance: Exported Around the World 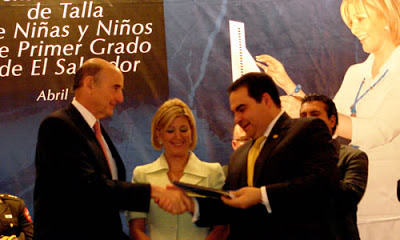 During a recent heated meeting at the US Embassy in El Salvador, Ambassador Charles Glazer admitted that the US government had intervened in the 2004 Salvadoran Presidential Elections on behalf of the right-wing ARENA party. The meeting on June 27 was requested by a group of 12 US citizens, including professors, students, journalists and community activists who were taking part in a 10-day delegation organized by the Committee in Solidarity with the People of El Salvador (CISPES).

In their meeting with the Ambassador, the group focused on continued US intervention in El Salvador. They cited statements made by US State Department officials denouncing the leftist Farabundo Marti Liberation Front (FMLN) party during the 2004 presidential campaign. The delegates also referenced legislation put forward in Congress by Rep. Tom Tancredo (R-CO) that threatened to cut off remittances sent by Salvadorans in the US to their families in El Salvador should the FMLN win. “The US Embassy in El Salvador never countered this absurd threat or clarified the impossibility of such legislation being passed,” said Rosa Lozano, a delegate from Washington DC. “Ultimately, such intervention helped turn a close race for the presidency into a decisive victory for the right-wing Nationalist Republican Alliance (ARENA) party.”

When asked directly if the US government had intervened in the 2004 presidential elections on behalf of the ARENA party, Ambassador Glazer replied in the affirmative. When asked if such intervention would occur again, he said, “No.”

The aggressive, disrespectful conduct of Ambassador Glazer was also of concern to those who attended the meeting. “Mr. Glazer arrived with the idea of attacking our delegation and rudely countering everything we put forward, to the point of being verbally abusive to at least two of the delegates,” said Andrew Kafel, a member of the delegation from New York. “Whether or not the Ambassador agrees with the concerns we laid out about US intervention, he has a duty as a public official to hear us out in a respectful manner,” continued Kafel. “If this is how we as US citizens are treated, we can only imagine how the Ambassador interacts with Salvadorans. We hope that in the future the State Department will better orient its representatives about how to dialogue with those holding a differing opinion.”

During the meeting, the Embassy labor attaché claimed that the possibility of fraud in the 2009 Salvadoran elections will be diminished because of the active monitoring of various international organizations, and emphasized the role to be played by the International Republican Institute (IRI) and the National Democratic Institute (NDI), both subsections of the National Endowment of Democracy (NED). When challenged about the partisan nature of these quasi-non governmental organizations, as well as accusations that the IRI and NDI have played an interventionist role in other Latin American elections, the Embassy representative admitted that there was controversy and doubts surrounding the NED.

Indeed, “in 2007, the IRI–headed by Republican presidential candidate John McCain–presented President Saca with its ‘Freedom Award,’ showing its clear ideological preference in the polarized Salvadoran political process,” said Laura Embree-Lowry, a member of the Boston chapter of CISPES and a participant in the Embassy meeting. “The presence of partisan groups like the IRI and NDI may in fact be counterproductive to the goal of the Salvadoran people, which is to hold free and fair elections in 2009.”

Burke Stansbury is CISPES Executive Director. CISPES is currently campaigning to prevent US intervention in the upcoming Salvadoran elections. For more information and to sign the People’s Pledge to Defend Free and Fair Elections in El Salvador, go to www.cispes.org. You can reach the Seattle CISPES office directly at: seacispes@igc.org, 206-325-5494.

This entry was posted in RagBlog and tagged American Hegemony, Latin America. Bookmark the permalink.

1 Response to US Arrogance: Exported Around the World