Uncowered by the Sacred Cows of rightwing America, free-speech activist and frequent defendant Larry Flynt also has had a healthy contempt for hypocrisy, moral crusaders, and Supreme Court justices — in 1983 he disrupted a high court hearing to call the justices “eight assholes and a token cunt.”

Candidate Palin, a buxom former cheerleader AND beauty queen — these probably are the two most visited subjects in contemporary American pornography — with a “questionable” moral background (do the math on her marriage date and daughter’s birth date) and an unquestioning morally self-righteous stump speech, provides a veritable “vessel” to be filled by someone with Flynt’s taste for savaging moral hypocrites and their “sins of the flesh.”

Coming at the very time when voters, especially red-blooded beer-drinking American male voters (Joe Six-Pack), are wondering — and/or fantasizing — about this hot new political figure, Flynt has pushed his wheelchair into the center of the arena to offer up a revealing and penetrating version of the Palin story —also featuring, according to the Hustler Video press release, a bi-racial lesbian “threeway” with Hils and Condi, some backdoor action with the Russians, and ongoing sexual commentary by “Bill O’Reilly.”

1. Will Flynt’s parody come closer to the real truth about the GOP veep candidate than the lipgloss coming from the Repugs’ erstwhile team of fiction writers?

2. Will Nailin’ Paylin compel fantasy-fueled male blue-collar voters to jerk their levers for McCain-Palin on November 4?

4. What will the real Sarah say when she sees the film? 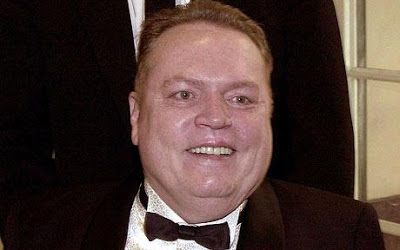 So that Hustler skin flick starring a “Sarah Palin lookalike?” The company sent out a press page with more details about it. You can read the first scene from the script here, (which is 100 percent genuine and not in any way made up even though it appears to be an obvious parody and contains enough elements of satire in it that even the densest of observers would logically assume that it was a fantastical creation.)

BEVERLY HILLS — Once again when it comes to sex and politics, HUSTLER continues to be at the top of the game! Hustler Video could not resist the urge to spoof the MILF-tastic Alaska governor and Republican vice presidential candidate Sarah Palin. Let’s face it: Who wouldn’t want to see that sexy hockey mom taking it all off?!

Nailin’ Paylin will take the viewer on a naughty adventure to the wild side of that sexy Alaska governor. Sara Paylin will not only be showing us some girl-on-girl lovin’ but will also be nailing the Russians, who come knocking on her back-door (wink, wink) and in a flashback “young” Paylin’s creationist college professor will explain a “big bang” theory even she can’t deny!