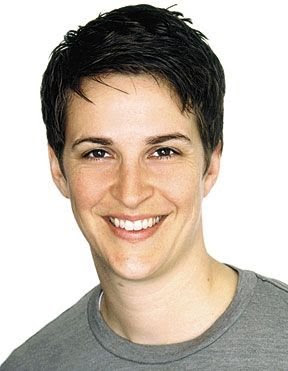 Rachel Maddow has been sounding off about politics on MSNBC so often she might as well have her own show.

And now she does.

The liberal commentator and Air America radio host, who has become a breakout star for the cable channel during the presidential campaign, is taking over the 9 p.m. slot following Keith Olbermann, whom she often subs for on “Countdown.” Olbermann broke what he called a “fully authorized leak” yesterday on the left-wing Web site Daily Kos. Dan Abrams, the former MSNBC general manager who had been hosting “Verdict” at that hour, will continue as NBC’s chief legal correspondent, become a “Dateline” contributor and serve as a daytime anchor for MSNBC.

With the promotion — “The Rachel Maddow Show” begins Sept. 8 — the 35-year-old commentator breaks into what has sometimes been derided as a boys club at the network, led by Olbermann and Chris Matthews. Hillary Clinton’s campaign frequently ripped MSNBC for what it called sexist coverage during the Democratic primaries. Maddow, who lives with her girlfriend Susan Mikula in Manhattan and Northampton, Mass., may also be the first openly gay woman to host a prime-time news program.

Her appointment is certain to draw criticism that MSNBC is moving further left in an attempt to compete with Fox News from the opposite end of the spectrum. John McCain’s Republican campaign has repeatedly assailed the network’s campaign coverage as biased.

Maddow, who leavens her barbs with humor, is something of a heroine on the left. New York magazine recently ran an item headlined “Why We’re Gay for Rachel Maddow,” and a Nation article said: “Maddow didn’t get here by bluster and bravado but with a combination of crisp thinking and galumphing good cheer. Remarkably, this season’s discovery isn’t a glossy matinee idol or a smooth-talking partisan hack but a PhD Rhodes scholar lesbian policy wonk who started as a prison AIDS activist.”

[Rachel Maddow] turned heads at MSNBC when she served as a fill-in host for Olbermann for the first time.

“By that point, we knew she was smart, articulate, just made for television,” said Griffin. Maddow clinched her solo hosting gig after she spent a full week subbing for Olbermann in July while he was pressing the flesh at the Television Critics Assn. press tour in BevHills, Griffin was sold ealed the deal.

“I was sold after that week,” Griffin said. “I knew she would get a show someday; I didn’t think it would be this quick. But Keith’s audience really connects with her.”