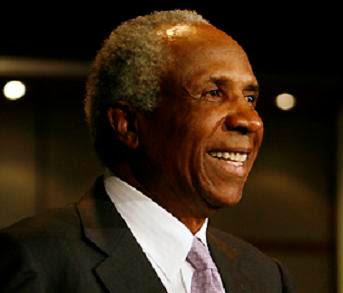 Hall of Famer Frank Robinson will be honored for his contributions to civil rights and to the betterment of baseball. Photo by Jacquelyn Martin / AP.
Beacon Awards salute trailblazers
By Justice B. Hill / March 26, 2008

As it did a year ago, Major League Baseball will salute a man on Friday who blazed trails for others of color in a sport that helped reshape American society.

In Memphis, Tenn., baseball, its legends and its fans will pay homage to Hall of Fame outfielder Frank Robinson for his contributions to the sport.

Robinson will be one of three honorees during the second annual Beacon Awards.

Henry Aaron, Minnie Minoso, Joe Morgan and Joseph Lowery, the latter of whom co-founded the Southern Christian Leadership Conference in 1957 with the Rev. Martin Luther King, will headline a star-studded lineup of dignitaries at an awards dinner during which Robinson, actress/writer/social activist Ruby Dee and the late publishing tycoon John H. Johnson will receive Beacon Awards.

The Beacon Awards, which Commissioner Bud Selig established last year, honor people who have made significant contributions to civil rights and to the betterment of baseball. They are part of a week-long celebration of baseball and its ties to the civil rights movement.

As part of the celebration, baseball will hold its second annual Civil Rights Game, sponsored by AutoZone, on Saturday. The Chicago White Sox will take on the New York Mets in an exhibition game at 5 p.m. ET in the Triple-A home of the Memphis Redbirds. ESPN and MLB.TV will broadcast the game live, with pregame shows beginning at 4 p.m. ET.

Proceeds from all Civil Rights Game events go to charities, which include the National Civil Rights Museum, the NAACP Legal Defense and Educational Fund, the Memphis Redbirds Baseball Foundation, the MLB Urban Youth Foundation and Realizing the Dream, an organization dedicated to continuing the legacy and work of the King family.

During his career, Robinson contributed as much as anyone else to these causes. His playing days produced elite numbers, and in 1974, he broke one of the remaining barriers for black men in baseball: managing a team.

The Cleveland Indians hired the tough-minded Robinson, after giving consideration for the job to Larry Doby, to take over a storied franchise that had long played a role in bringing diversity to the game.

“If I had one wish in the world today,” Robinson said on the day his hiring was made official, “it would be that Jackie Robinson was here to see this happen.”

But what Frank Robinson did was keep the trailblazing spirit of Jackie Robinson alive, even though baseball and society had made great strides since the summer of 1947, when Robinson first played for the Brooklyn Dodgers.

Frank Robinson never did see his job as a manager as anything more than what others who held the job had done.

Groundbreaking, yes. Robinson understood the historical aspect of the job, but he was also mindful of what it meant to baseball fans.

“People come out to see the players,” he once said on the CBS show “Face the Nation.” “When do you see a manager anyway? When he’s out on the field arguing with the umpires, making a fool of himself and you know you can’t win, and when he brings out the lineup card.”

Even after his managing days ended, Frank Robinson remained a leading figure in baseball’s effort to diversify the game. He held administrative positions with Major League teams and in the Commissioner’s Office.

His contribution to the game featured the same drive to improve it that the late Buck O’Neil, the first winner of the Beacon of Life Award, displayed.

And much like O’Neil, Robinson has spent a lion’s share of his life as an ambassador for the game.

At the awards dinner on Friday, Dee will receive the MLB Beacon of Change Award for championing civil rights. Presented last year to filmmaker Spike Lee, the award is given to a person who inspires innovative social thought through his or her creative works.

As for Johnson, he will receive the MLB Beacon of Hope Award posthumously for using his enormous resources to nurture future journalists when he endowed the John H. Johnson School of Communications at Howard University.

Considered a trailblazer in the publishing industry, Johnson founded Ebony and Jet magazines, two publications that chronicled the history of black people and put a spotlight on their culture.

The inaugural Beacon of Hope went to Vera Clemente, widow of Hall of Famer Roberto Clemente, for her dedication to local youth through the development and operation of Ciudad Deportiva in her native Puerto Rico.

The Beacon of Hope is given to a person who invests in his or her country’s future through helping youth.

Justice B. Hill is a reporter for MLB.com. This story was not subject to the approval of Major League Baseball or its clubs.