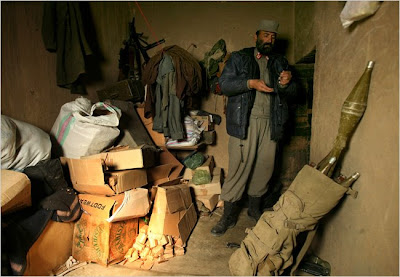 Courtesy of The New York Times, I’m proud to present to you a brand new member of the Bush Administration War Profiteer Hall of Shame: 22 year-old Efraim Diveroli, who’s company AEY has been awarded approximately $300 million in contracts by the Pentagon.

How does a 22 year-old get a multi-million dollar defense contract? you ask. “AEY’s proposal represented the best value to the government,” the Army tells the Times. (Never mind that AEY was headed by a guy who’d been busted by the police for carrying a fake ID.)

AEY’s fattest contract came in January of last year, when a Pentagon contract made AEY, “which operates out of an unmarked office in Miami Beach,… the main supplier of munitions to Afghanistan’s army and police forces.” AEY’s VP is 25 and a licensed masseur. AEY also had a $5.7 million contract for rifles for Iraqi forces, among others.

As the Times found out, AEY fulfilled that contract by dealing with a variety of shady arms dealers (one Czech, one Swiss) to get their hands on ammo stockpiles in the old Eastern bloc. And as far as ensuring the quality of the munitions? Here’s how it went in Albania:

Albania offered to sell tens of millions of cartridges manufactured as long ago as 1950. For tests, a 25-year-old AEY representative was given 1,000 cartridges to fire, according to Ylli Pinari, the director of the arms export agency at the time of the sale. No ballistic performance was recorded, he said. The rounds were fired by hand.

Not surprisingly, the Afghan army has been unhappy with the product. AEY shipped the decades-old ammo in cardboard boxes — apparently to save money on shipping charges. And the Times reports that the boxes arrived in Afghanistan spilling out of the boxes, “revealing ammunition manufactured in China in 1966.” It’s illegal to deal in Chinese arms.

In response to the Times’ questions, the Army has suspended AEY “from any future federal contracting, citing shipments of Chinese ammunition and claiming that Mr. Diveroli misled the Army by saying the munitions were Hungarian.”

But surely the most memorable details of the story (which is well worth reading in full) have to do with a kid trying to wiggle out of legal trouble on the basis of his work fighting terror:

By [2005, when Diveroli became president of the company at the age of 19, taking over from his father], pressures were emerging in Efraim Diveroli’s life. In November 2005, a young woman sought an order of protection from him in the domestic violence division of Dade County Circuit Court….

Mr. Diveroli sought court delays on national security grounds. “I am the President and only official employee of my business,” he wrote to the judge on Dec. 8, 2005. “My business is currently of great importance to the country as I am licensed Defense Contractor to the United States Government in the fight against terrorism in Iraq and I am doing my very best to provide our troops with all their equipment needs on pending critical contracts.”…

On Dec. 21, 2006, the police were called back to the condominium. Mr. Diveroli and AEY’s vice president, David M. Packouz, had just been in a fight with the valet parking attendant.

The fight began, the police said, after the attendant refused to give Mr. Diveroli his keys and Mr. Diveroli entered the garage to get them himself. A witness said Mr. Diveroli and Mr. Packouz both beat the man; police photographs showed bruises and scrapes on his face and back.

When the police searched Mr. Diveroli, they found he had a forged driver’s license that added four years to his age and made him appear old enough to buy alcoholas a minor. His birthday had been the day before.

Diveroli would have been prohibited from dealing in contracts if he’d been convicted of possession of a forged document, which is a felony, the Times reports, but “to avoid a conviction on his record, Mr. Diveroli entered a six-month diversion program for first offenders in May 2007 that spared him from standing trial.”

Unfortunately, it seems that AEY is unwinding with all this public attention:

[I]n Miami Beach, even before the suspension, AEY had lost staff members. Michael Diveroli, the company’s founder, told a reporter that he no longer had any relationship with the company. Mr. Packouz, who was AEY’s vice president, and Levi Meyer, 25, who was briefly listed as general manager, had left the company, too.

Mr. Meyer offered a statement: “I’m not involved in that mess anymore.”

So it seems pretty clear that Diveroli is a shoo-in for the Hall of Shame. But the question becomes whether he’s in competition to be the champ. Is he competition for Erik Prince, Brent Wilkes?

This entry was posted in RagBlog and tagged Corruption, Military. Bookmark the permalink.