Reflections on the Elections — D. Hamilton 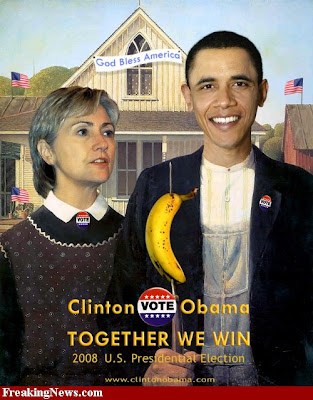 Looking Past Super Tuesday
David Hamilton / The Rag Blog
Analysis of the Democratic presidential race. From a publicity perspective, Tuesday was a great day for Hillary Clinton. However, from the perspective of the delegate count, it was very nearly a tie.

In Texas, the picture is much more complicated. Clinton won the popular vote in Texas 51 to 47 per cent. However, delegates in Texas are apportioned by senatorial district based on the number of people in those districts who voted for the Democratic Party candidate in the last election for governor. Some senatorial districts have as many as 8 delegates, some as few as 2.

Generally, the areas richest in delegates are where Obama did best. The areas poorest in delegates are where Clinton did best. Hence, it is likely that Obama will actually win slightly more delegates in the Texas primary. Furthermore, one third of the Texas delegates in play are chosen by the caucuses that took place Tuesday night after the primaries. It appears that Obama will win a slight majority of those. Hence, Obama may have lost the overall popular vote in Texas, but he is very likely to win the most delegates from Texas in the end, by a margin about equal to the margin of delegates he lost in Ohio.

Hence, in terms of the delegate count, Tuesday night was a tie or very close to one.

What’s down the road?

Obama leads by roughly 100 delegates among delegates won in primaries and caucuses. He also leads in the composite popular vote of all states that have so far voted. Clinton leads among super delegates by about 50. Because of proportional representation, it is highly unlikely that Clinton will be able to catch Obama in delegates won by the end of the primaries. But it is also highly unlikely that Obama will win enough delegates in the primaries to win the nomination outright before the convention.

A huge variable is the votes of Florida and Michigan. They moved their primaries up to early in the process thinking that they would thus have more say in the outcome. Those date changes were disallowed by the national Democratic Party and the delegates chosen in those primaries are considered illegitimate and not included in the composite delegate count. Clinton won those illegitimate primaries and she wants those delegations seated, although all candidates agreed beforehand not to campaign in those primaries and that the outcome would not be authorized. It is not likely that those delegates will be given to Clinton. It is increasingly likely that those primaries will be run again. The Republican governor of Florida has offered to have the state pay for a re-run.

It is increasingly likely that this race will go to the floor of the convention in Denver in August. Clinton will argue that she won the big states that Democrats must carry in order to win. Obama will argue that he won the most delegates, the most total votes and the most states, that he’ll carry the big Democratic (red) states as well as Clinton would or better and that he’ll do better in swing states by better attracting independents and disgruntled Republicans.

My personal take is that a vote for Clinton is a vote for McCain. She is a divisive figure who does not attract independents or Republicans and does not energize the Democratic Party base besides older women. With Clinton as the candidate, the resurgent youth vote will disappear and the African American vote will be only average. Most polls shows her losing to McCain in head to head match ups. Of the 20 most recent polls pitting Clinton vs McCain, he wins 13 of them and 2 are ties. In the 13 he won, McCain’s average margin of victory over Clinton is 4.3%. In the 5 polls won by Clinton, her average margin is 3.6%.

Most polls show Obama beating McCain. Of the 20 most recent polls pitting Obama vs McCain, Obama wins 15 and one is a tie. In the 4 polls he won, McCain’s average margin of victory is 2%. In the 15 Obama won, his average margin of victory is 6.1%. (see realclearpolitics.com) That’s why Rush Limbaugh recommended to his listeners that they vote for Clinton yesterday. Bill Clinton then went on Limbaugh’s show to pander to Limbaugh’s right wing “ditto heads.”

As far as Texas is concerned, it is highly unlikely that either Democratic Party candidate will beat McCain here in November. It is frankly inconceivable that Hillary Clinton will win Texas over McCain, especially if he chooses Kay Bailey Hutchison as his vice president. One could imagine Obama attracting enough independents, mobilizing minorities and youth, and holding other Democratic Party constituencies to win Texas (if Hutchison is not the VP), but that’s a stretch. If Texas is in play in November, the Democrats win 40 states.

A personal note. Obama won my precinct (338 in western Travis County between West Lake Hills and Bee Caves) by nearly 2 to 1 in primary voting and won it by almost exactly 2 to 1 in the caucuses. The vote at the caucus was 241 for Obama to 121 for Clinton. The turn out was unprecedented. Obama won 35 of 52 delegates in our precinct to the county convention.

I was chosen as the Obama caucus chairperson. Sally and I are both delegates to the county convention. The “Plan for the Withdrawal of US military forces from Iraq” was passed by a resounding and enthusiastic voice vote. Most of the other resolutions were also passed. None were read to the assembled crowd in their entirety and there was little debate. I’m going to apply to be on the resolution committee.

My own thinking is that the President contest will turn increasingly into a contest of stronger promises to fix things as the economy gets worse toward August.

The public doesn’t understand that even if they had reelected FDRoosevelt now, that he operated in an era when the US productive potentials were unused, whereas now they are not there to recover. Since the problems are so serious, I think they will make whoever gets elected look bad by the end of their first term. If Hillary gets elected, Obama soon starts looking like the better choice by comparison.

Also, the corporate domination issues that the Dems would like to avoid will come back at some point, even without Nader. If the Republicans are discredited and out of power, the big money automatically refocuses within the Dems, which will work to cause a split. Like the class interests of corporate cash, big banks and Dem party bosses — that versus the suffering masses of homeless and unemployed. I think the dems will have to set up some of the same kind of WPA safetynet programs that Roosevelt did.

The psychology of the public changed during the great depression as people realized that everyone was in trouble together and started being more collectivist in their politics.

And a Tall Tale from the Texas Hill Country

Charlie Loving / The Rag Blog
We drove into Deer Corn (Camp Wood) to go to the Democratic Precinct Convention. We got to the EMS building at 7:30 as is called for but couldn’t get in the front door. “The door is stuck.” said a voice from inside.
The vote counters were still inside counting. They let us in the side door and wanted to know what we wanted? “Did we need to vote?” There was one other person there — the president of the Chamber of Commerce and a fugitive from Dallas. We stood around and tried to get the people to let us have our caucus. They had no clue what we were talking about at first. Then I said to the lady with the red shirt, “Like on television news. The meeting where we vote again, the Texas Two Step thing.” “Oh, yeah.” she said. “I don’t know nothing about it.”
By 8 p.m. she had called her boss the county clerk and then finally the Democratic Chair on the line. An ancient hunch-backed lady with a walker found our envelope and we got started. We elected our chair and secretary and delegates. Two votes for Obama and one for Hillary and we all get to go to the County convention as delegates. What a hoot. By 9 pm we were through and on the way back home.

We learned how democracy works in rural America where they have never had a Democrat before.