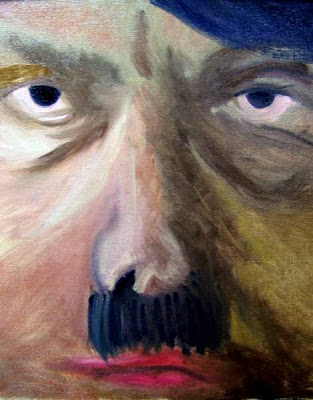 A Study in Tyranny: oil sketch, inspired by my interest in politics, persuasion, influence, brain washing, propaganda, as well as sales and marketing. —Luscher.

At this point,we have no other choice than Obama, love him or not, unless we want to support some third party candidate who would certainly lose badly as they always do. He will surely do less damage than McCain, but we would be foolish to expect miracles from Obama unless they toss most of the Republicans out of Congress in November or the next election.

As recent articles by John Pilger, Alexander Cockburn, and Uri Avnery make clear, by groveling before the Israel Lobby Obama has dispelled any hope that his presidency would make a difference.

Obama told the Lobby that in order to protect Israel he would use all the powers of the presidency to prevent Iran from having a nuclear weapon. As in the case of Saddam Hussein’s “weapons of mass destruction,” the conclusion whether or not Iran is making a nuclear weapon will be determined by propaganda and not by fact. Therefore, there is no difference between Bush, McCain, Obama, and the Lobby with regard to the Middle East.

As Israel has several hundred nuclear weapons, and a modern air force and missiles supplied by the US, the idea that Israel needs American protection from Iran is a fantasy. All Israel needs to do in order to be safe and to live in peace is to stop stealing the West Bank and to drop its designs on southern Lebanon. Obama is too smart not to know that US foreign policy has been Shanghaied by the Lobby not in order to protect innocent Israel but to enable Israel’s territorial expansion.

Obama has dispelled hope on the economic front as well. Obama has appointed two leading apologists for jobs offshoring as his economic advisors–Bill Clinton’s Treasury Robert Rubin and Rubin associate Jason Furman. These two are notorious for their justifications of policies that benefit Wall Street, CEOs, and large retailers at the expense of the economic well being and careers of millions of Americans.

As a result of offshoring, good jobs in America are disappearing. The Bureau of Labor Statistics job figures make it totally clear that the US economy has ceased creating net new middle class jobs in the private economy in the 21st century.

Stressing higher returns to shareholders, Wall Street pressures corporations to move their operations abroad. Wal-Mart tells its American suppliers to “meet the Chinese price” or else, a price that US firms can meet only by offshoring their operations to China.

Every job and product that is offshored increases the US trade deficit and lowers US GDP. It is a losing game for America that rewards the overpaid elite of Wall Street and corporate America, while dismantling the ladders of upward mobility.

By enlarging the trade deficit, offshoring erodes the reserve currency role of the dollar, the real basis of US power. Now that US imports exceed US industrial production, it is unlikely that the US trade deficit can be closed except by a sharp reduction in US consumption, which implies a drop in US living standards. If the dollar loses its reserve currency status, the US government will not be able to finance its budget and trade deficits.

The answer is that Obama’s election would signify the electorate’s rejection of Bush and the Republicans. Considering the cowardice of the Democratic Congress and its reluctance to hold a criminal regime accountable, electoral defeat is the only accountability that the Bush Republicans are likely to experience.

If the Republicans win the election and escape accountability, the damage Republicans have done to the US Constitution, civil liberty, and a free society will be irreversible. The Bush Regime and its totalitarians have openly violated US law against spying on Americans without warrants and US and international laws against torture. The regime and its totalitarians have violated the Constitution that they are sworn to uphold. Bush’s attorney general Gonzales even asserted to the Senate Judiciary Committee that the US Constitution does not provide habeas corpus protection to American citizens.

To reelect such a party is to murder liberty in America.

The June 12 Supreme Court decision pulled America back from the abyss of tyranny. For years hundreds of innocent people have been held by the Bush regime without charges, a handful of which were set to be tried in a kangaroo military tribunal in which they could be convicted on the basis of secret evidence and confession extracted by torture.

The Court ruled 5-4 that detainees have the right to appeal to civilian courts for habeas corpus protection. The Bush Republicans claiming “extraordinary times” had created a gestapo system in which the government could accuse, without presenting any evidence, a person of being a threat and on that basis alone imprison him indefinitely. Justice Anthony Kennedy reminded the Republican Brownshirts that “The laws and Constitution are designed to survive, and remain in force, in extraordinary times.”

President Bush indicated that he was inclined to again seek to overturn the Court with a law.

Republican presidential nominee John McCain said that the Supreme Court decision protecting habeas corpus “is one of the worst decisions in the history of this country.”

The four Supreme Court justices (Alito, Roberts, Scalia, and Thomas) who voted for tyranny in America are all Republicans. They all came out of the Federalist Society, a highly subversive group of right-wing lawyers who are determined to elevate the powers of the executive branch above Congress and the Supreme Court.

The Republican Party has morphed into a Brownshirt Party. The party worships “energy in the executive.” If the Brownshirt Republicans are reelected, they only need one more Supreme Court appointment in order to destroy American liberty.

That is what is at stake in the November election. As bad as Obama is on important issues, his election will signal rejection of the tyranny to which the Republicans are committed.