RNC8: The Aftermath of the Republican Convention 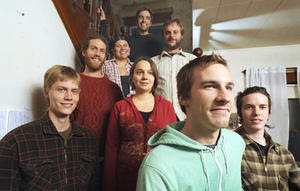 MINNEAPOLIS/ST. PAUL – Eryn Trimmer sits in a Loring Park coffee shop and peers out the window to the street below. Dressed in a casual charcoal-colored sweater, with wispy blond hair, the gangly 23-year-old handyman resembles your typical coffeehouse regular. You’d hardly suspect he’s an accused terrorist.

The Saturday before the Republican National Convention, Trimmer was sleeping upstairs in his two-story home in Minneapolis’s Powderhorn neighborhood when he was awakened by a clatter. Within seconds, armed officers burst through his bedroom, guns drawn, and arrested Trimmer, his live-in girlfriend Monica Bicking, and their roommate Garrett Fitzgerald.

Five more RNC protesters would be rounded up during that weekend in advance of the RNC. Dubbed the “RNC 8,” the defendants-seven of whom were members of anarchist group the RNC Welcoming Committee-stand accused of “conspiring to riot,” a second-degree felony. According to a police affidavit, the eight acted as ringleaders in a plot to “kidnap delegates” and “sabotage the Xcel Center.”

Authorities leveled the charges based on evidence provided by paid informants and undercover agents who infiltrated the RNC Welcoming Committee in the months leading up to the convention (“Moles Wanted,” 5/21/08). “We assumed the group was under surveillance and that that could include informants,” Trimmer says. “It was an open group and we weren’t organizing anything illegal, so we didn’t want to kick anybody out.”

But the RNC 8 face more than the standard felony charges. For the first time, authorities are wielding an obscure state anti-terrorism statute passed in the nervous aftermath of the 9/11 attacks. Second-degree “conspiracy to commit riot” ordinarily carries a maximum two-and-a-half-year prison sentence, but because the alleged crime was intended to “further terrorism,” the sentence can be doubled to a maximum of five years.

“The statute’s definition of ‘terrorism’ appears to be modeled after a statute in the Patriot Act,” says attorney Bruce Nestor, who is defending one of the accused conspirators. “But whereas the Patriot Act statute requires an act of violence against people, the language here extends the definition to include ‘violence to property.'”

The original bill, proposed May 2, 2001, had nothing to do with terrorism: It required morticians and funeral directors to issue death notices for unidentifiable homeless people. Twelve months, five revisions, and one national tragedy later, the bill had mushroomed into a massive omnibus bill that included the hastily appended terrorism statute. Because the addendum was a relatively minor part of a larger piece of legislation, no one seems to be able to say for sure who inserted it.

“There was reaction to 9/11 and everybody wanted to get prepared,” says Rep. Mary Liz Holberg (R-Lakeville), who voted for the bill. “I think the rationale behind it was that if individuals act in an organized manner and perpetuate crimes on the public, stiffer penalties are in order.”

The most controversial aspect of the statute is its characterization of terrorism, which includes any felony that “significantly disrupts or interferes with the lawful exercise, operation, or conduct of government, lawful commerce, or the right of lawful assembly.” Attorney Larry Leventhal, who is representing accused RNC 8 conspirator Max Specktor, says the language is overly broad.

“By that rationale, the definition of terrorism could be extended to anything,” Leventhal argues. “If they don’t like what you and I are saying to each other over a phone they’re tapping, they can say that it’s ‘terroristic.'”

Ramsey County Sheriff Bob Fletcher says that the RNC 8 may not look like the terrorists who crashed airplanes into the World Trade Center, but their actions justify the stiffer penalties. Fletcher points to the fact that a 50-pound sandbag was hurled from a freeway overpass onto a busload of delegates as proof.

“I think it’s fair to say the people who were in downtown St. Paul during the convention, including delegates, felt a level of terror from the actions of the individuals associated with the RNC Welcoming Committee,” Fletcher says.

The RNC 8 deny having any operational involvement in the sandbag incident, but admit that some members may have planned acts of “civil disobedience,” such as blockading the Xcel Center.

At a probable cause hearing Monday, attorneys for the RNC 8 successfully argued for an extension to gather further evidence. But even if the defendants are convicted, it’s doubtful any of them will serve the five years in prison called for by the new law.

“The judge has a great deal of discretion as to what probationary conditions to put into place,” says County Attorney Susan Gaertner. “Generally, that might include up to a year in jail, community service, or treatment.”

That comes as little consolation to Luce Guillen-Givens, one of the eight accused. Having been involved with various immigrant-rights and antiwar groups since the age of 15, Guillen-Givens, now 24, worries what will happen to the next person accused of “furthering terrorism.”

“Historically, these crackdowns serve the purpose of disrupting and undermining movements of resistance,” she says. “First, you try conspiracy charges out on the fringes and, if it works there, you move incrementally in.”

This entry was posted in RagBlog and tagged Criminal Justice, Republican Convention, Terrorism. Bookmark the permalink.

1 Response to RNC8: The Aftermath of the Republican Convention