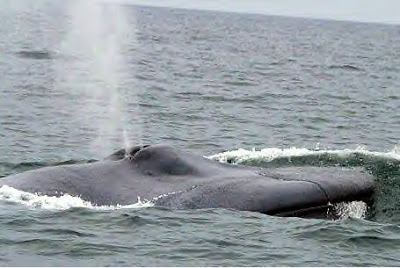 Environmental groups contend that the use of sonar harms marine mammals, like this blue whale. The Supreme Court, however, ruled the Navy should be able to use sonar without restrictions in exercises off the California coast. Photo: NOAA / AP.
Supreme Court Says Navy Trumps Whales
By Pete Yost / November 12, 2008

WASHINGTON – The Supreme Court ruled Wednesday that military training trumps protecting whales in a dispute over the Navy’s use of sonar in submarine-hunting exercises off the coast of southern California.

Writing for the majority in the court’s first decision of the term, Chief Justice John Roberts said the most serious possible injury to environmental groups would be harm to an unknown number of the marine mammals the groups study.

“In contrast, forcing the Navy to deploy an inadequately trained anti-submarine force jeopardizes the safety of the fleet,” the chief justice wrote. He said the overall public interest tips strongly in favor of the Navy.

The Natural Resources Defense Council and other environmental organizations had sued the Navy, winning restrictions in lower federal courts on sonar use.

Dolphins, whales and sea lions are among the 37 species of marine mammals in the area.

The Bush administration argued that there is little evidence of harm to marine life in more than 40 years of exercises.

The court did not deal with the merits of the claims put forward by the environmental groups. It said, rather, that federal courts abused their discretion by ordering the Navy to limit sonar use in some cases and to turn it off altogether in others.

Justice John Paul Stevens did not join the majority opinion, but said the lower courts had failed to adequately explain the basis for siding with the environmental groups. Justice Stephen Breyer would have allowed some restrictions to remain.

Justices Ruth Bader Ginsburg and David Souter dissented, saying the prospect of harm to the whales was sufficient to justify limits on sonar use.

In complicated sonar exercises, ships, subs and aircraft must train together in order to track modern diesel-electric submarines which can operate almost silently.

The Navy says the area off southern California is the only location on the West Coast that is relatively close to land, air and sea bases as well as amphibious landing areas.

NRDC said the ruling is a narrow one.

“I don’t think it establishes a bright line rule,” said Joel Reynolds, director of NRDC’s marine mammal protection program. “The court acknowledged that environmental interests are important, but in this case that the interest in training was greater, was more significant than interest in the environment.”

The Navy challenged restrictions that included shutting down sonar when a marine mammal is spotted within 2,200 yards of a vessel.