Ron Ridenour Reports on May Day in Cuba 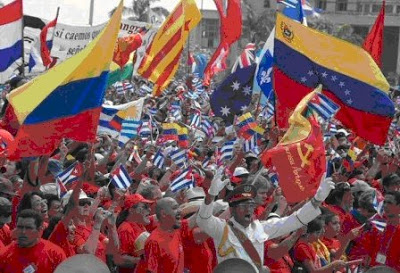 Seventeen days after the first May Day of the revolution, May 17, 1959, Fidel Castro proclaimed the first radical land reform to an outburst of great popular joy, as well as a violent reaction from the national landowners and their ally in the United States, the latter continuing its merciless revenge against the revolutionary government of Cuba.

On that day 50 years ago, Fidel said, “A wonderful future awaits our country if we dedicate ourselves to work with all our might.”

The historic and indelible advantages Cubans earned from forging an incipient socialism following the nation’s real independence, with its ensuing products and services for all, was supported by the vast majority of the population, especially in the early years. Just to mention some benefits: free and ample health care and education for all; clothing and food for all babies and school children; free or inexpensive access to all sports and cultural events; the assurance that no resident go without minimal nutrition and a residence; the right for all to obtain work. And the spirit, the spirit of idealistic Don Quixote, and that of the thoroughly dedicated revolutionary guerrilla, El Che.

However, today, fifty years later, there is still a long ways to go to advance the interests, energies and the wisdom of Cuba’s working people. It is a sad fact of reality, which must be confronted today, that many Cubans have not worked “with all our might.”

The nation is fraught with passivity, poor production in quantity and quality. I believe this is so in large part because people lack the real power to make decisions at their work centers, schools, and even in their local governments and provincial and national legislatures. 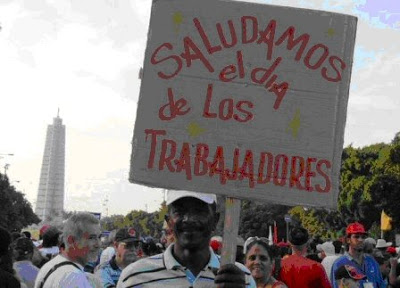 They are not in control of their work, their production, or of product distribution. Too many people are not contributing to society’s needs; too many people are skimming off the enticing plate of foreign capitalism; too many people have lost their morality, their solidarity and have succumbed to their thirst for the tinted silver plate.

Today, half a century after the great victory, its no secret that many people are tired and discontent. The four main areas of dissatisfaction, as I see it, are: a) low salaries and the two currency system, which separates people; b) shortages of sufficient foodstuffs and other basic goods; c) perpetual lack of sufficient housing made worse by last year’s hurricane destruction; d) insufficient improvement in worker empowerment, with few exceptions.

And then, for many -especially the revolutionary conscious people who linger in the days of Che enthusiasm for creating the new man and woman- there is the crippling effect that the government continues to limit the access to ample information and real debate, hampering an exchange of ideas necessary for them to become empowered.
This has led to a sizeable segment of the population, especially youth, to be disbelievers of what they are told by the government and its mass media. They hunger for more and open information.

There are a few signs of movement, not least among some university students and professors. On this May Day 2009, let us listen carefully and join those voices.

This entry was posted in RagBlog and tagged Cuba, May Day, Workers. Bookmark the permalink.