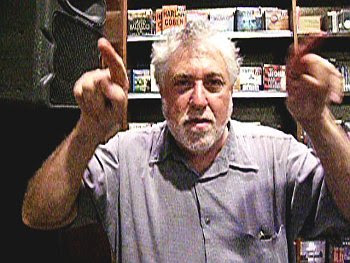 Mark Rudd was the chairman of the Columbia University chapter of Students for a Democratic Society [SDS] at the time of the 1968 Columbia Student Revolt; and Rudd’s autobiography, Underground: My Life with SDS and the Weathermen was finally published in March 2009.

In a recent email interview with Toward Freedom, Rudd responded to some questions about how U.S. pacifists might consider responding to the role U.S. universities play in the current historical era of “permanent war abroad and economic depression at home” and about his new book.

In 2009, some U.S. pacifists seem to regard elite universities like Columbia as institutions that have, both historically and currently, opposed war and opposed racism—since they hire both anti-war and African-American professors and administrators, implement affirmative action hiring programs, set up “peace studies” and “African-American studies” departments, steer foundation grants and scholarship money in the direction of students from historically oppressed communities and to local community groups, and provide free or low-rent meeting room space for anti-war students and off-campus pacifist groups.

Mark Rudd: The specific demands we raised leading up to the spring of 1968–training and recruitment of military officers for the war in Vietnam, weapons research for the war, the building of a gym in public park land–were only the tip of the iceberg of Columbia’s policies. Within months of the strike, the North American Congress on Latin America (NACLA) produced a book entitled “Who Rules Columbia,” in which they detailed the military, State Dept., and CIA contracts and connections with the School of International Affairs, the various geographical “area studies,” such as the East Asia Institute, as well as the revolving door between Columbia and the government; also Columbia’s expansion into the surrounding community at the expense of non-white residents. Most of these connections and policies are still in place; almost all major research universities are still major war contractors. The point is that student activists have their work cut out for them to research and expose what’s correctly called the military-industrial-academic complex.

In chapter 1 of your book, titled “A Good German,” you recall that when you first met the then-chairman of Columbia’s Independent Committee on Vietnam (ICV) anti-war student group–current U.S. political prisoner David Gilbert—in early 1966, Gilbert mentioned that in May 1965 his group had “held an antiwar protest at the Naval ROTC graduation ceremony” at Columbia. And later in the “A Good German” chapter you mention that in March 1967 you had “taken part in a sit-in at a Naval ROTC class” at Columbia.

Why did you oppose Naval ROTC at Columbia in the 1960s? And do you think U.S. pacifists should consider opposing ROTC on U.S. university campuses in 2009?

Mark Rudd: The issue is fundamentally moral. Is the training of people to wage war against other countries, carrying out a criminally aggressive military policy, appropriate in an institution that pretends to seek the truth? Our answer to this question was NO, because we believed in the necessity to oppose U.S. violence as a moral value. Remember, too, that the time we lived in was essentially post-World War II, and the problem of values in society was still being debated in the aftermath of Nazism. I have no doubt that contemporary students will be taking this up again in the near future.

Mark Rudd: Same response as #2 above. Whether recruitment is “external” (e.g., Marine recruiters) or “internal” (Military Science Dept. training future naval officers), it amounts to the same thing. The resources of the university are being used to help wage war.

In chapter 3 of your book, titled “Action Faction,” you write that on March 27, 1968 “SDS had fifteen hundred names on a petition calling for the severing of ” Columbia University’s “ties with the Pentagon think-tank, the Institute for Defense Analyses (IDA);” and “IDA…became the shorthand symbol for Columbia’s huge network of complicity with the war.”

Mark Rudd: I believe that the entire US military budget should be cut back and the money used for social needs both in this country and around the world. Security would be much better served by the development of true international law, not more nuclear weapons. If that doesn’t happen in the 21st century, we’re doomed. All war research should immediately stop everywhere and the money be put into peace, diplomacy, law, and sustainable energy development. To do less now is not only suicidal, it’s downright dumb.

In your book, you mention that you and Abbie Hoffman were both arrested at a November 1967 anti-war protest in Midtown Manhattan against the Foreign Policy Association giving an award to then-Secretary of State Dean Rusk.

April 2009 marks the 20th anniversary of Abbie’s death. How would you characterize the role that Abbie Hoffman played in U.S. anti-war movement history and his historical relationship to U.S. pacifists and non-violent anti-war activists like Dave Dellinger?

Mark Rudd: Abbie was essentially a comedian and an organizer. He was not at all violent; he always encouraged mass organizing, though often in the form of provocative guerilla theater, like the Yippies nominating a pig for president in 1968. I forget how he and Dave Dellinger got along in Chicago, both in 1968 and during the conspiracy trial the next year. My guess is that they respected each other. Perhaps you know more specifics.

Speaking of Abbie Hoffman, how would you respond to Professor Jonah Raskin’s assertion in his review of your book which was posted on The Rag Blog that “like Abbie Hoffman, Mark Rudd wasn’t suited for the underground life—he needed attention, and attention is, of course, the last thing that any fugitive wants;” and “Underground suggests, implies, and shows that Rudd is up there, along with Abbie, near the top of the list of 1960s radicals who wanted attention, and who received far more attention than they needed…It undid Abbie, and it also helped to undo Rudd.”?

Mark Rudd: I wonder if Jonah actually read my book.

Mark Rudd: Just another way for the far right to try get at Obama, but it’s so indirect that it makes zero sense to anybody else. There was a tiny connection between Obama and Bill Ayers, but that fact gained no votes for John McCain. These people are so stupid that they’re still pursuing a tactic that’s already failed. I find that a rather comforting fact.

[This interview was also posted on Toward Freedom.]