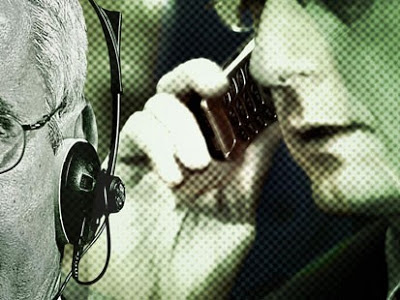 Remember the Bill of Rights? Habeas corpus? Rule of law? It seems the New Corporatists view these concepts as “relics” of a bygone past.

Senator Kit Bond of Missouri is now floating legislation that he
calls a “compromise” on warrantless wiretapping. Unfortunately, the
bill would be a disaster for our civil rights and the rule of law. It
gives the President everything he’s demanded, including retroactive
immunity for telecom companies that spied on us without the warrants required by the current FISA law.

I just signed a petition calling on my representative to reject
Senator Bond’s legislation when it gets to the House. I hope you will
too.

Say No to Senator Bond’s FISA Capitulation
For over 30 years, the Foreign Intelligence Surveillance Act (FISA) has dictated necessary and appropriate ways for the U.S. government to collect intelligence on its own citizens for the sake of national security. Two key provisions of this law are that:

*The government must obtain a warrant from the Foreign Intelligence Surveillance Court (FISC) before spying on a citizen.

*Citizens have the right to sue if they believe they were spied upon illegally.

FISA provided broad leeway for every President from Carter to Clinton to conduct extensive intelligence-gathering operations. However, President Bush has decided that he is above warrants and judicial review, and major newspapers have reported that he has been using big telecoms like AT&T to spy on Americans without warrants for years.

Now, there are over 40 lawsuits against this arguably unconstitutional practice, and rather than taking his chances in court, President Bush is looking to his allies in Congress for a legislative back door solution. In February, the House of Representatives stood up to President Bush and protected the Constitution, but now the Senate is getting ready to cave in again. Senator Kit Bond is proposing a complete overhaul of FISA — he calls it a “compromise,” but we call it a catastrophe.

Here are some features of Senator Bond’s attack on civil liberties:

*Unlimited warrantless wiretapping for this President and every President for the next six years.

*Retroactive immunity for all the telecoms that helped President Bush wiretap illegally during the past 8 years — this time dressed up as a “trial” in the secret Foreign Intelligence Surveillance Court where a note from the President amounts to a get out of jail free card.

*No future judicial review for the President, either: the Attorney General gets to decide whether the President’s warrantless wiretapping is legal or not.

In order to avoid this disastrous legislation, all the House has to do is stand strong on their February vote, and stick with the current version of FISA. Send a message to your representative today, and him or her to vote for the Constitution by voting against Senator Bond’s catastrophic FISA “compromise” when it comes to the House.