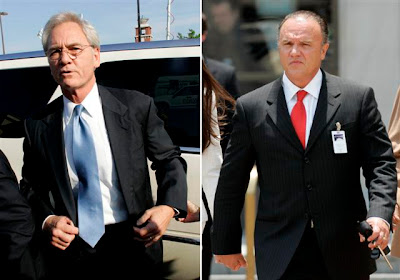 Many progressives have joined in complaining about a thoroughly politicized DOJ. Yet AG Holder proceeds as though there was nothing amiss.

On September 13, the Eleventh Circuit Court refused to grant former Alabama Governor Don Siegelman (1999-2003) a new trial. The panel sent Siegelman back to the same politically motivated judge who helped railroad the popular Democrat in the first place.

Eric Holder’s Department of Justice refused to look at compelling whistle-blower evidence and worked hard to defeat Siegelman, who was most likely the victim of a successful effort to remove him from political life. The case became intertwined with the plitically-motivated firings of federal prosecutors because it was claimed that Karl Rove was involved in these ugly incidents.

The Siegelman Case illustrates the kind of political prosecution that has become common in the Republican South. These prosecutions hinge on a very vague and short piece of legislation that imposes stiff penalties upon officials accused of providing citizens with “honest services” due to corruption.

Siegelman wanted a state lottery to fund education and accepted two bundled donations of $250,000 each to the Alabama Educational Foundation from Richard Scrushy, CEO of Health South. Siegelman then appointed Scrushy to a state hospital board. Three former governors had appointed this CEO to state boards. The prosecutors were unable to prove corrupt intent when they attempted to prove bribery.

Siegelman’s attorney found potentially exculpatory information in comments made by landfill developer Clayton Lamar (Lanny) Young, but President Judge Mark Fuller would not permit them to introduce the evidence. Two jurors worked together to find evidence on the internet that they could use to persuade other jurors to vote against Siegelman. Some of the arguments they gave their colleagues came from a TV station blog that was critical of Siegelman. When their e-mails were discovered, the judge did nothing about the situation.

The case hinged upon testimony of former chief aide Nick Bailey, who said he negotiated bribes on behalf of the governor. Bailey admitted he was not present when Siegelman appointed Scrushy. The prosecutors had Bailey rehearse his testimony in seventy practice sessions and did not give the defense their interview notes. Bailey received a light sentence in return for his testimony. His employer, Luther “Stan” Pate, said the federal officials got him to testify by threatening to use information he used drugs and by referring to rumors that Bailey and the governor were sexual partners.

Siegelman was sentenced to seven years and four months in June, 2007. President Judge Mark Fuller denied Siegelman the customary 45 days to get his affairs in order and had the former governor carted off to jail in leg irons and handcuffs. The federal marshall only permitted him to use the King James version of the Bible while he was being shunted around from prison to prison before settling in Oakdale, Louisiana.

When prisoner Siegelman took his case to the press, the prosecutors threatened to charge him with obstruction and conspiring to bring the court into public contempt. Fuller threatened to add five to seven years to the sentence. Last spring, Siegelman was released on bond pending an effort to get a new trial.

Governor Siegelman’s problems began in 2002, when he narrowly lost a reelection bid to Republican Bob Riley. Siegelman lost when Baldwin County returns were restated, reducing his total there by 7,000 votes. No Democratic observers were present when this happened, and the state Attorney General Bob Pryor successfully blocked efforts to look into the matter or have a recount there. Siegelman launched a legal challenge that went nowhere.

Before that, Republicans had unsuccessfully sought to jail Siegelman. He had angered Republicans with his efforts to fight casinos, and Jack Abramoff was funding Riley to the tune of $1.3 million in return for shutting down Poach Creek, which drew customers from Abramoff clients out of state. The documents on all were suppressed by Senator John McCain when he was investigating Abramoff.

When Siegelman challenged the election results, these efforts were renewed in earnest. Dana Jill Simpson, an attorney and Republican operative, later testified that she heard William Canary, Riley’s chief advisor, say that he would get “his girls” to work on Siegelman and would enlist the help of his friend Karl Rove. “His girls” was a reference to U.S. Attorney Leura Canary, his wife, and to another U.S. Attorney.

The “girls” soon got busy and when their efforts seemed to flag, the Professional Responsibilities Division of the DOJ prodded them on. The Justice Department rejected an FOIA request for documents relevant to whether she had a conflict of interest in the case. Eventually, Mrs. Canary had to recuse herself, but only after having shaped the case. Though the 93 U.S. Attorneys are supposed to resign with the election of a new president, Mrs. Canary remains at her post today.

Acting U.S. Attorney Louis V. Franklin, who became the lead prosecutor, has had unusual and contradictory things to say about how the decision was made to indict Siegelman. Clearly, Franklin was going out of his way to suggest the matter was of no importance to Washington.

Mr. Canary later testified that he had talked about getting the girls to work against Siegelman. The most recent DOJ filing says he swore under oath that he had not contacted Karl Rove, but none of this appears in his Congressional testimony. After the successful prosecution, Rove threw a party for Steve Feaga, one of the prosecutors, at his Rosemary Beach, Florida home. Feaga is a Reserve Colonel who served in the legal office at Langley AFB. Perhaps he could have had a role in reviewing the fueling contract held by Judge Fuller’s firm.

Simpson also said that she heard in early 2005 that a federal judge was about to be appointed who “hated” Siegelman and was determined to “hang him.” There was a danger then that Siegelman might try to run again for governor. The new federal judge turned out to be Mark Fuller, a former Republican official who believed Siegelman was responsible for having him audited. Fuller had been very active in the 2002 campaign.

Miss Simpson had known Governor Riley since law school. She became disenchanted with politics when she was asked to do research that would essentially frame several Democrats. Since coming forward, she has had some troubling experiences. Her house was accidentally burned to the ground, and she was forced off the road by an Alabama state law enforcement official. Her car was totaled. Before she testified before Congress, a helpful Democrat recommended she hire a lawyer who had worked for the GOP for decades. She declined. Her testimony led Representative Randy Forbes (R-VA.) to demand a Congressional investigation of her. 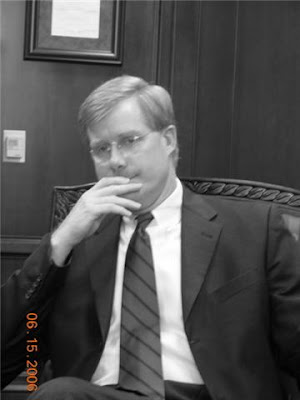 President Judge Mark Fuller.
Fuller was a very wealthy man, controlling 43.7% of Doss Aviation, which did $300 million worth of business with the Defense Department in the George W. Bush years. That fact alone gave the appearance of bias and should have resulted in Fuller removing himself from the case.

Retired federal district judge U.C. Clemon complained that the prosecutors poisoned the jury pool, engaged in judge shopping, and were guilty of other forms of misconduct. Seventy five former attorneys general from forty states denounced the handling of the Siegelman Case and demanded a retrial. They wrote, in part:

Completely absent from the Trial Record is any evidence that Governor Siegelman and Mr. Scrushy entered into an explicit agreement whereby Mr. Scrushy’s appointment to the CON Board was conditioned upon Mr. Scrushy’s making the political contributions in question. Two previous Governors had appointed Scrushy to the same position without incident. [Emphasis added.]

Legal scholar Bruce Fine, a conservative, complained during the G.W. Bush years, “We have a Justice Department that has substantially been turned into a political arm of the White House.” Many progressives have joined in complaining about a thoroughly politicized DOJ. Yet AG Holder proceeds as though there was nothing amiss.

The great majority of Bush’s 93 U.S. Attorneys are still in place. Now Holder backstops the political prosecution of Don Siegelman. It would probably be too much to suggest that President Obama pardon this victim of selective prosecution or at least commute the sentence to time served. The latter course would still serve the GOP by preventing Siegelman from ever seeking elective office.

[For much more information on Republican misdeeds, see Sherm’s The New Republican Coalition : Its Rise and Impact, The Seventies to Present (Publish America). It can be acquired by calling 301-695-1707. On line, go here, or find it at Amazon.com.]

This entry was posted in Rag Bloggers and tagged Justice Department, Obama Administration. Bookmark the permalink.