‘Socialized Medicine’ : It Works for Others 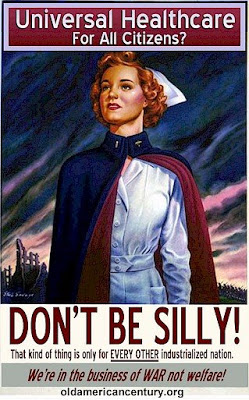 ‘Sweden and other European countries have some of the best health care in the world and provide it at a cost far less than in America.’
By Hosea W. McAdoo M.D. / The Rag Blog / December 7, 2008

[President-elect Barack Obama has asked the public for input on health care reform. These are Dr. McAdoo’s suggestions.]

I am a physician who has been involved in private health care as well as short stints in VA and Navy medicine. During my career over thirty years I have seen Medicare evolve, seen the resistance to both Medicare and Medicaid. I have seen medicine change from being physician centered to business centered.

With the new medicine I have seen costs soar, malpractice become an industry and seen many patients (NOT CLIENTS) find it impossible to get any kind of care. This in spite of the frightening misinformation presented by both President Bush and McCain’s health care adviser that all Americans really have health insurance by just going to emergency rooms. When leaders give such atrocious advice it is clear why America is near the bottom ranking in health care.

During the campaign McCain made a statement that we don’t want health care like Sweden that is socialized. This is another incredibly stupid remark as Sweden and other European countries have some of the best health care in the world and provide it at a cost far less than in America. Remember, a socialized system seems to work for President Bush, Vice President Cheney and Sen. McCain since they go to the National Naval Medical Center or similar hospitals and seem to like it. They just don’t want the rest of us to have it.

The incredible controversy about “socialized medicine” is a false argument revealing little understanding of health care delivery here and abroad. The word, “socialized,” is used more for it’s emotional charge than as a part of logical argument. It is true that the UK is very close to socialized, but provides excellent medicine in spite of the slander about long waits etc. Have you tried to get an appointment with a new primary care physician or specialist? Note, the UK far outranks our system in bottom line results, much better than America. Canada has a system similar in many ways to our Medicare and also provides better care than we do and at far less cost but is not socialized at the level of delivery. There is freedom of choice. Unlike Medicare, each province manages its own system although they are quite similar and care is given across Canada. There seems to be much dislike for the Canadian system in America, but Canadians almost universally like the system with far fewer complaints than here. The misinformation about these other systems seems to be very common in those who accept whatever rumor is being spread.

In America, we have the potential for giving excellent care but our main failure is cost and the inability to give care for all. We also have too few physicians and nurses and they are allocated in inefficient ways. Physician reimbursement always seems to be a place to shave costs, but when the costs of education and the number of hours of work, office overhead and malpractice insurance costs are factored in, reimbursement may be one reason many students choose fields with “gimmicks” that make time more valuable such as endoscopy and surgery. This leaves primary care and other fields that bill by time rather than by procedure in worsening straits.

Many people have told me that they don’t want government interference in their choice of a physician. A moment’s thought will reveal the absurdity of this view. Medicare allows almost total choice of physician and choice of hospital where that physician is on staff.

Private insurance will give you a book of preferred providers, actually should be called, “if you don’t go here we won’t pay and may not anyway.”

I do not trust government to run things but we are already socialized in many aspects from our military, police, fire protection, highways, FAA, the VA system and education as well as in many others. Most of these work reasonably well and it us unlikely that private industry can do better and still provide for stockholders and high salaries.

Medicare operates with an overhead of about 3% while private insurance with its various rules, uncertain payment and limited physician choice charge about 30%. That’s TEN times as much. This means that for each health care dollar under Medicare 27 cents more is available for patient care and better provider reimbursement and lower cost overall. Just look at the medicare Advantage boondoggle to see how private insurance milks the system, something Medicare can do far cheaper.

1. Much more use of nurse practitioners and physician assistants. Their schooling is shorter and cheaper. They seem to be more compulsive with exams and protocols. This would build the base of primary care. I do think they should operate with some physician guidance as their training is less extensive in diagnosis and treatment of less common problems.

2. Anything short of a single payer system will fail. We can pussyfoot around trying this and that to continue the welfare to insurance companies but these 30% gifts will continue to break the system, restrict access, fail to cover pre-existing illness, limit physician choice and force higher office overhead and cost physician time dealing with 3,000 plus providers. I understand that telling the insurance companies bye bye will be hard for our indebted and spineless politicians. It only makes sense to model ourselves after systems that work and work well rather than sticking to a system we know is broken just to make life easier for a few at the expense of the people. (I know. that’s how politics works but it is time for CHANGE!)

3. COST, that is a problem. We can see instantly a 27% savings by going to a Medicare system and that alone will come close to covering all those now left out. There will be cost savings to physicians by lowering overhead now taken by large insurance departments, accounts payable and stumbling blocks used by companies to avoid or delay payment. When used properly, Medicare is amazingly smooth and fast paying and since private insurance usually is tied to Medicare Usual and Customary payments the payments are similar.

At present, money flows into the health care system from many sources, private pay, the Federal government via medicare, Medicaid, VA , USPHS, Military medicine, research grants and others. States provide via Medicaid, public health, public and teaching hospitals and others. Private insurance covered by private and employer premiums is a large part. Since this amount already flows into the medicine by a multitude of confusing, inefficient and possibly dishonest methods why couldn’t the same amount be collected by other means and used to finance a Medicare for all?

In America it would be very helpful to look at other working systems. The other systems have many problems and surely are not perfect but their bottom line concerning access, longevity, neonatal mortality, chronic illness, preventative medicine, lower cost, absent paperwork would seem to me to be worthwhile even if some misinformed call it socialist. Health care is too important to ration it based on finances. These other countries base it on medical need.

[These comments were also posted on the Progressives for Obama listserv.]

1 Response to ‘Socialized Medicine’ : It Works for Others