Someone Should Phone the Imperial Equivalent of Alcoholics Anonymous 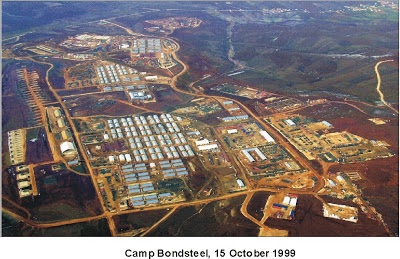 Going on an Imperial Bender: How the U.S. Garrisons the Planet and Doesn’t Even Notice
By Tom Engelhardt / September 4, 2008

Here it is, as simply as I can put it: In the course of any year, there must be relatively few countries on this planet on which U.S. soldiers do not set foot, whether with guns blazing, humanitarian aid in hand, or just for a friendly visit. In startling numbers of countries, our soldiers not only arrive, but stay interminably, if not indefinitely. Sometimes they live on military bases built to the tune of billions of dollars that amount to sizeable American towns (with accompanying amenities), sometimes on stripped down forward operating bases that may not even have showers. When those troops don’t stay, often American equipment does — carefully stored for further use at tiny “cooperative security locations,” known informally as “lily pads” (from which U.S. troops, like so many frogs, could assumedly leap quickly into a region in crisis).

The fact is: We garrison the planet north to south, east to west, and even on the seven seas, thanks to our various fleets and our massive aircraft carriers which, with 5,000-6,000 personnel aboard — that is, the population of an American town — are functionally floating bases.

And here’s the other half of that simple truth: We don’t care to know about it. We, the American people, aided and abetted by our politicians, the Pentagon, and the mainstream media, are knee-deep in base denial.

Now, that’s the gist of it. If, like most Americans, that’s more than you care to know, stop here.

Where the Sun Never Sets

Let’s face it, we’re on an imperial bender and it’s been a long, long night. Even now, in the wee hours, the Pentagon continues its massive expansion of recent years; we spend militarily as if there were no tomorrow; we’re still building bases as if the world were our oyster; and we’re still in denial. Someone should phone the imperial equivalent of Alcoholics Anonymous.

But let’s start in a sunnier time, less than two decades ago, when it seemed that there would be many tomorrows, all painted red, white, and blue. Remember the 1990s when the U.S. was hailed — or perhaps more accurately, Washington hailed itself — not just as the planet’s “sole superpower” or even its unique “hyperpower,” but as its “global policeman,” the only cop on the block? As it happened, our leaders took that label seriously and our central police headquarters, that famed five-sided building in Washington D.C, promptly began dropping police stations — aka military bases — in or near the oil heartlands of the planet (Kosovo, Saudi Arabia, Qatar, Kuwait) after successful wars in the former Yugoslavia and the Persian Gulf.

As those bases multiplied, it seemed that we were embarking on a new, post-Soviet version of “containment.” With the USSR gone, however, what we were containing grew a lot vaguer and, before 9/11, no one spoke its name. Nonetheless, it was, in essence, Muslims who happened to live on so many of the key oil lands of the planet.

Yes, for a while we also kept intact our old bases from our triumphant mega-war against Japan and Germany, and then the stalemated “police action” in South Korea (1950-1953) — vast structures which added up to something like an all-military American version of the old British Raj. According to the Pentagon, we still have a total of 124 bases in Japan, up to 38 on the small island of Okinawa, and 87 in South Korea. (Of course, there were setbacks. The giant bases we built in South Vietnam were lost in 1975, and we were peaceably ejected from our major bases in the Philippines in 1992.)

But imagine the hubris involved in the idea of being “global policeman” or “sheriff” and marching into a Dodge City that was nothing less than Planet Earth itself. Naturally, with a whole passel of bad guys out there, a global “swamp” to be “drained,” as key Bush administration officials loved to describe it post-9/11, we armed ourselves to kill, not stun. And the police stations… Well, they were often something to behold — and they still are.

Let’s start with the basics: Almost 70 years after World War II, the sun is still incapable of setting on the American “empire of bases” — in Chalmers Johnson’s phrase — which at this moment stretches from Australia to Italy, Japan to Qatar, Iraq to Colombia, Greenland to the Indian Ocean island of Diego Garcia, Rumania to Okinawa. And new bases of various kinds are going up all the time (always with rumors of more to come). For instance, an American missile system is slated to go into Poland and a radar system into Israel. That will mean Americans stationed in both countries and, undoubtedly, modest bases of one sort or another to go with them. (The Israeli one — “the first American base on Israeli territory” — reports Aluf Benn of Haaretz, will be in the Negev desert.)

There are 194 countries on the planet (more or less), and officially 39 of them have American “facilities,” large and/or small. But those are only the bases the Pentagon officially acknowledges. Others simply aren’t counted, either because, as in the case of Jordan, a country finds it politically preferable not to acknowledge such bases; because, as in the case of Pakistan, the American military shares bases that are officially Pakistani; or because bases in war zones, no matter how elaborate, somehow don’t count. In other words, that 39 figure doesn’t even include Iraq or Afghanistan. By 2005, according to the Washington Post, there were 106 American bases in Iraq, ranging from tiny outposts to mega-bases like Balad Air Base and the ill-named Camp Victory that house tens of thousands of troops, private contractors, Defense Department civilians, have bus routes, traffic lights, PXes, big name fast-food restaurants, and so on.

Some of these bases are, in effect, “American towns” on foreign soil. In Afghanistan, Bagram Air Base, previously used by the Soviets in their occupation of the country, is the largest and best known. There are, however, many more, large and small, including Kandahar Air Base, located in what was once the unofficial capital of the Taliban, which even has a full-scale hockey rink (evidently for its Canadian contingent of troops).

You would think that all of this would be genuine news, that the establishment of new bases would regularly generate significant news stories, that books by the score would pour out on America’s version of imperial control. But here’s the strange thing: We garrison the globe in ways that really are — not to put too fine a point on it — unprecedented, and yet, if you happen to live in the United States, you basically wouldn’t know it; or, thought about another way, you wouldn’t have to know it.

In Washington, our garrisoning of the world is so taken for granted that no one seems to blink when billions go into a new base in some exotic, embattled, war-torn land. There’s no discussion, no debate at all. News about bases abroad, and Pentagon basing strategy, is, at best, inside-the-fold stuff, meant for policy wonks and news jockeys. There may be no subject more taken for granted in Washington, less seriously attended to, or more deserving of coverage.

Read all of it here. / TomDispatch

This entry was posted in RagBlog and tagged Imperialism, Militarism, U.S. Aggression. Bookmark the permalink.