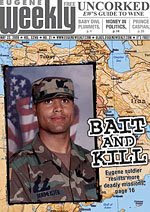 Private First Class James Burmeister faces a Special Court Martial at Fort Knox on July 16. The charges are AWOL and desertion. He returned to Fort Knox voluntarily in March, after living 10 months in Canada with his spouse and infant child. He refused redeployment to Iraq while on leave in May 2007.

In most such cases at Fort Knox, the Army has in recent years quietly dismissed the resister with a less than honorable discharge “for the good of the military.” This time it’s different. The brass “offered” Burmeister a year in military prison and a dishonorable discharge if he agreed to plead guilty.

Burmeister refused the offer. His father, Erich, says the Army is making an example of James for denouncing a secret “bait-and-switch” program he was forced to participate in while in Iraq. In media interviews last year in Canada, James described the program as a war crime he was forced to commit. Shortly afterward, the program’s details came out in the Washington Post.

“Baiting is putting an object out there that we know they will use, with the intention of destroying the enemy,” the Post quoted Capt. Matthew Didier, leader of an elite sniper scout platoon. “We would put an item out there and watch it. If someone found the item, picked it up and attempted to leave with the item, we would engage the individual.”

The Post reported that “Eugene Fidell, president of the National Institute of Military Justice, said such a baiting program … raises troubling possibilities, such as what happens when civilians pick up the items. … ‘You might as well ask every Iraqi to walk around with a target on his back,’ Fidell said.” (Sept. 24, 2007)

James had asked to be classified as a conscientious objector following his training in Germany, but his request was ignored by his commander. Instead, he became a machine gunner. “Our unit’s job seemed to be more about targeting a largely innocent civilian population or deliberately attracting confrontation,” he wrote in his deposition seeking asylum in Canada. “These citizens were almost always unarmed. In some cases the Iraqi victims looked to me like they were children.” (Eugene Weekly, May 22)

In Iraq, Burmeister had been knocked unconscious and his face filled with shrapnel when his Humvee was hit by a roadside bomb. The shrapnel wounds left him with a traumatic brain injury, and he suffers from severe Post-Traumatic Stress Disorder. His parents insist that he urgently needs medical and psychological help, not jail time.

His parents have waged an unceasing struggle for the Army to release him. They called on their representative, Peter DeFazio, to launch a congressional inquiry into James’s case, but have so far heard nothing. James’ mother, Helen Burmeister, flew to Fort Knox in June, with help from anti-war ex-Colonel Ann Wright. Helen spoke directly to the base commander there, demanding that her son be discharged in lieu of a court martial. She then joined supporters from Veterans for Peace and Vietnam Vets Against the War demonstrating outside.

On July 8 the Army invited Helen to attend her son’s court martial on July 16. This time both she and her husband Erich are going. They’re determined to keep James out of jail. “I bought a one-way ticket,” Erich told Workers World. “I’m not leaving without my son. If I have to sit outside the base and wait for him, I’ll do it. Even if I have to go on a hunger strike, that’s what I’ll do. My son does not deserve another day in jail.”

In an interview with Courage to Resist, Erich said: “[James] struggles with PTSD, yet he is quartered within earshot of the shooting range and tank training area, daily hearing the gunfire and explosions. He has been prescribed a dangerous cocktail of anti-psychotic drugs and sleep aids by Army doctors, while the command decides if they want to send him to prison, as a coward, a soldier who faced death, and followed orders to ‘shoot to kill.’ The cowards—George Bush and Dick Cheney, those in Congress and the generals with the blood on their hands—why are they the punishers instead of the punished?” (couragetoresist.org, May 12)

Supporters can contact the Fort Knox post commander, General Campbell, to demand a speedy discharge and no further punishment for James. Send email to knox.pao@conus.army.mil, or call the Fort Knox public affairs office at 502-624-7451. Ask that they discharge PFC James Burmeister now so that he can get the help that he needs.

This entry was posted in RagBlog and tagged Criminal Justice, Deserters, Military. Bookmark the permalink.