Stand Up For Peace

Stand Up In September Vigil On Staten Island
By Next Left Notes – August 28, 2007 | News 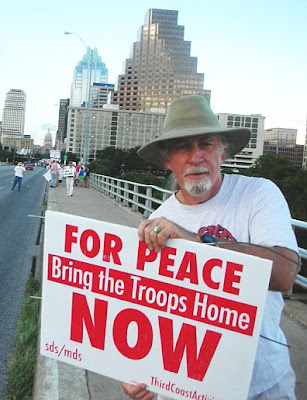 Our Very Own David Hamilton of MDS at the Stand Up vigil – in Austin, TX
(Photo: Sally Hamilton / MDS)

STATEN ISLAND, NY – August 28, 2008. On Tuesday, August 28, Staten Islanders joined ordinary people from all over the country in holding a vigil to tell Congress that the time to stand up to Bush and redeploy US troops out of the unwinnable civil war in Iraq is NOW. Turnout was high and so were spirits as vigilers engaged people passing by. Drivers and pedestrians honked, cheered and stopped to take photographs. The event concluded with speakers from local antiwar organizations, including a military mom whose son has already done a tour in Afghanistan and another in Iraq – and who might be redeployed. The vigil was sponsored by MoveOn.org and hosted by the Staten Island chapter of Movement for a Democratic Society (MDS) and other local antiwar groups.

On a very pleasant August evening, organizers from several different local activist organizations joined together to hold a candlelight vigil at the seat of Staten Island’s local government, Borough Hall, directly across busy Richmond Terrace from the famous Staten Island Ferry. The goal – to let the US Congress know that the world is watching and they need to stand up to George W. Bush and Dick Cheney. Bush, known for his intellectual rigor mortis, is continuing to promote the fiction that the recent troop “surge” is having a positive effect. Vigil organizers scoffed at this and were insistent that the Congress must bring the troops home now and impeach Bush and Cheney for war crimes as well. The vigil featured signs that said: “Iraq Escalation – Wrong Way”, “Support The Troops – End The War” and “Impeach Them Now”. Several vigilers wore baseball caps that asked the largely rhetorical question: “Impeach Cheney?” Others wore tshirts that demanded “Arrest Bush”. On the sidewalk two pairs of military boots – with the names of fallen soldiers affixed – flanked a peace sign made of votive candles.

“Bush is playing three card monte again – telling voters and Congress that the ’surge’ is working. I grew up in during the Viet Nam war, I’ve heard all the lies before. It’s time to get our people home before we lose any more lives in a war based totally on lies,” said Tom Good, an organizer with Movement for a Democratic Society (MDS). “I have a twelve year old son. I want more for him than endless war,” he added.

“The surge is a colossal failure. The religious civil war in Iraq is spiraling out of control and our presence there is exacerbating the situation. We aren’t helping anything and our children are coming home maimed and worse – from a war that has already claimed too many lives,” said Elaine Brower, a World Can’t Wait organizer whose son served with the Marines in Iraq – and may be redeployed.

“The reckless policy in Iraq could drag on for another decade if we sit back and allow a crumbling Republican administration to continue their failed policies,” said Devra Morice, a vigil organizer and MDS member.

Sally Jones of Peace Action spoke about the need for concerned citizens to plug into local groups – and to attend a march on Vito Fossella’s Brooklyn office scheduled for September 15, 2007. Jim Moschella of the WRL’s NYC chapter discussed Operation No Recruit – a week of protests at the Times Square recruiting center. John Cronan of Pace SDS spoke about the Iraq Moratorium, scheduled to begin September 21, 2007. Elaine Brower of WCW, whose son James is in the Marine Corps, spoke about the horror of war and the need to remove Bush from office. Rebecca White of the Green Party talked about Counter Recruitment, the achilles heel of the military and Laurie Arbeiter of Critical Voice spoke about a letter writing campaign to House Speaker Pelosi, demanding the impeachment of Bush and Cheney. Arbeiter also stressed the need for the American people to make a “citizen’s arrest” of George Bush on September 25, 2007, referring to a protest scheduled to coincide with Bush’s next trip to the United Nations.

About 40 people attended the spirited event and organizers were pleased. The next MDS event is a “Honk For Impeachment” vigil at the SI Ferry Terminal on Sunday, September 2 from Noon to 1 pm. All are welcome.