Steve Russell :
The danger of a constitutional crisis

Mr. Trump’s relation to history is ignorance or disregard  — which one does not matter. 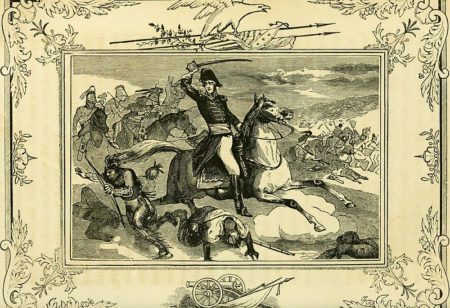 The Republican Party has been replaced by a personality cult that runs right over history, economics, and political science. It is a first principle of winning democratic elections that you consolidate your base and immediately reach out to expand it.

Mr. Trump is in the second half of his first term and he has governed in the interest of his base, threatened his political opponents with jail, and urged his supporters to believe that any election he does not win will be illegitimate. He has accused Robert Mueller of an attempted coup d’état. He was not attempting an analogy. He meant an illegitimate movement that must be opposed violently if necessary. The president of the United States is priming his supporters for civil war.

Mr. Trump’s relation to history is ignorance or disregard – which one does not matter. Political debate, like legal analysis, always requires historical context. We all agree that WWII happened and most of us agree that this country was changed forever by the GI Bill and Rosie the Riveter. We all agree the Civil War happened and most of us agree that the great civil rights movement that touched the lives of we who are getting old now was unfinished business from Reconstruction. Blacks may understand the Great Migration better than whites who may understand the Dust Bowl better than blacks but most Americans, if shown the numbers, could quickly understand what they were seeing and have an opinion about why it happened.

Cherokees share a history in a way non-Cherokees do not.

The very definition of “constitutional crisis” is a major problem the Constitution cannot answer. The U.S. Constitution is a work of genius. The scriveners were not a mob of hayseeds. The leaders were highly educated men. Their political views ranged from monarchist to borderline anarchist. Several were polymaths  — Franklin and Jefferson come to mind. The people who produced that document gave us a hell of a head start, but it’s not possible to anticipate everything that can go wrong hundreds of years into the future.

President Andrew Jackson promised to remove Indians west of the Mississippi River. The mechanism to remove the Cherokees was a treaty signed by persons with no authority. Chief Justice John Marshall had just written his opinion in Worcester v. Georgia, holding that tribal law governs on tribal land. The necessary implication was that tribal law was entitled to respect and therefore the removal treaty was void. There is an apocryphal story that President Jackson responded to with the remark, “John Marshall has made his decision  —  now let him enforce it.”

The facts of the Worcester case went farther than any necessary implication about tribal law. The state of Georgia had passed a law making it a crime for a non-Indian to be present on Indian land without a state license. Samuel Worcester, a missionary, was in jail for violating that law, and the Cherokee Nation took up his defense to raise the issue of tribal law controlling on tribal land. Marshall’s opinion was such a complete dead letter that Sam Worcester was not even released from jail.

What happens when the SCOTUS renders a decision and the state refuses to obey it?

That was a constitutional crisis. What happens when the SCOTUS renders a decision against a state and the state refuses to obey it? It was a constitutional crisis not because the document had no answer but because the POTUS would not apply the answer. Compare the exact same situation when Arkansas Gov. Orval Faubus called out the National Guard to keep black children out of public schools to which they had been ordered admitted by a federal court.

President Dwight Eisenhower federalized command of the Arkansas National Guard and, for good measure, mobilized the Screamin’ Eagles  —  the 101st Airborne Division — to escort some children to school. The SCOTUS case that forced integration of the public schools was not welcome to President Eisenhower, but he understood his duty.

When this nation comes to the edge of constitutional crisis, the context is either civil rights or scandal. Before Watergate caused all scandals to be reported with a suffix of -gate, there was Teapot Dome. The issue was bribery and one result was the first cabinet member sentenced to prison for actions in office, Secretary of the Interior Albert Fall, appointed by Warren G. Harding.

Fall came within a hair of getting away with it by stonewalling and obfuscating.

Fall came within a hair of getting away with it by stonewalling and obfuscating. Two results are pertinent to the stonewalling and obfuscation of the Trump administration. The first was a Supreme Court case arising from Teapot Dome, McGrain v. Daugherty, which held in 1927 that Congress has the power to compel testimony from officers of the executive branch. That would be the same testimony that Trump is currently stonewalling.

Another result of Teapot Dome was Congress passing a statute giving both the House and the Senate the power to review the tax records of any citizen, without regard to whether they hold public office. That statute remains in the law books to this day while Donald Trump remains, so far, in violation of it. The law was passed in the first place because Teapot Dome was broken open by a tactic made famous by Deep Throat during the Watergate scandal: “Follow the money!”

Richard Nixon, like Lyndon Johnson before him (at least), maintained a recording system in the Oval Office. Nixon either did not have a method for turning it off or he neglected to do so when discussing obstruction of justice.

Nixon’s secretary, Rosemary Woods, fell on her sword for the boss.

When the Watergate special prosecutor subpoenaed the tapes, Nixon litigated the issue to the SCOTUS. But when he lost, he turned over the tapes, less an 18 minute gap at a critical time. Nixon’s secretary, Rosemary Woods, fell on her sword for the boss and concocted a story about how she accidentally erased part of the tape that was just short of physically impossible. Any Cirque du Soleil acrobat could have easily erased the tape in the manner Ms. Woods described.

Mr. Nixon avoided a constitutional crisis by obeying the Supreme Court’s order, but in light of Mr. Trump’s determination to disobey the law as it has been since the Teapot Dome scandal, it would be a good idea to think about what would be likely to happen if Mr. Trump stands pat.

What could have happened when President Jackson disobeyed Worcester v. Georgia is that the Cherokee Nation could have ordered the Cherokee Marshal Service to engineer a violent jailbreak to force Georgia to obey the law. This did not happen because of the forbearance of Principal Chief John Ross.

What could have happened when President Eisenhower federalized command of the Arkansas National Guard, is that the Guard could have refused to follow federal orders and shooting could have broken out with the Screamin’ Eagles.

It’s hard to picture putting the POTUS in jail without violence.

What could have happened if Mr. Nixon had ignored the order to turn over the tapes is that he could have been held in contempt of court. Contempt is punished by a fine or jail time. Refusing to pay the fine means jail time. It’s hard to picture putting the POTUS in jail without violence  — or even with it, since he is commander in chief of the strongest military in the world.

Where we did not go because Mr. Nixon cared about the judgment of history, we may go because Mr. Trump does not care a rodent’s posterior what history says or will say. When the Constitution fails, the result is either grave injustice or violence. Or both. Another way to describe the violence likely to break out in response to a genuine constitutional crisis is civil war.

Mr. Trump claims Robert Mueller and “the Democrat Party” are out to get him because he discovered “scum” and “dirty cops” at the top of the Department of Justice and they are continuing to resist his efforts to “drain the swamp.” He makes his presidency sound like a cause worth fighting for.

If Congress or the courts want his evidence, they will perhaps have to come and take it. When the country steps outside the law, somebody is likely to get hurt. The only thing that keeps us inside the law is persons in power who respect the Constitution and laws and care about the judgment of history.

If mere words can’t make you afraid, find an old newsreel of a Mussolini rally before WWII  —  preferably with English subtitles  — and compare what you are seeing to a Trump rally.

1 Response to Steve Russell :
The danger of a constitutional crisis