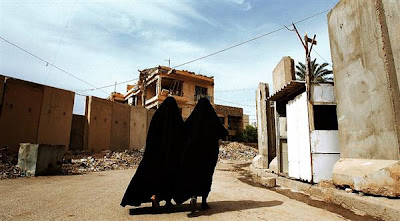 Sacrificed to the Surge
By Silvia Spring and Larry Kaplow / April 14, 2008

The insurgents have been driven out of her southwest Baghdad neighborhood, but the 30-year-old shop assistant is still frightened. A year ago Al Qaeda in Iraq ruled the streets outside her home, and Mahdi Army militia units kept the area under relentless attack. Now the Iraqis who helped get rid of the killers are the ones who scare her. The Americans imposed order a few months ago by recruiting and paying local men to turn in the names of suspected jihadists.

Similar armed groups have popped up all around the city. Each has its own bizarre rules; some threaten to kill women who don’t wear veils in public. The shop assistant is in mourning for her brother, who was killed last May, but she’s asking for trouble if she wears black more than three days running. According to the new enforcers in her neighborhood, anyone who dresses in mourning is committing blasphemy by questioning the will of God.

In the past year, militias like this one have transformed the war in Iraq. Americans call them Concerned Local Citizens (CLCs), or Sons of Iraq; Iraqis know them as Sahwa—Awakening—after the tribal council in Anbar province that launched a Sunni revolt against the tyranny of Al Qaeda in Iraq. The militias’ vital role (and the uncomfortable fact that many members used to be insurgents themselves) will be a big part of the debate this week, as American lawmakers hear testimony on the war’s progress from U.S. military commander Gen. David Petraeus and the U.S. ambassador to Baghdad, Ryan Crocker. What’s less likely to be discussed—and yet just as important in the long run—is the impact that tribal groups like the CLCs are having on Iraq’s social fabric, and in particular on its women.

America’s efforts to disengage from Iraq have led to some messy compromises. After years of trying without success to wrest Sunni areas from Qaeda control, U.S. ground commanders appear to have done it at last—but only by granting sweeping powers to sheiks and local leaders who can keep the peace. Now Iraq’s Sunni areas have been chopped into fragments, each one run by a different tribal ruler with different views on law and society. In some parts of Baghdad the situation changes visibly from block to block. No one can say how many of these leaders abuse their powers, or if their little sectors can ever be put back under the purview of a centrally controlled government. “We are becoming like Afghanistan was in the ’80s,” says Zainab Salbi, the Iraq-born founder and CEO of the activist group Women for Women International.

Saddam’s Iraq at least offered women the protection of enforced secularism; they were encouraged to study at universities and to pursue professional careers. That changed in the 1990s as the dictator began to rely on tribal sheiks to prop up his rule, while U.N. sanctions drove families into poverty and reduced opportunities for women. Americans arriving in 2003 hoped to make the new Iraq a showcase for gender equality. But women’s advocates say that dream fell by the wayside as violence engulfed the country.

Some tribal leaders are more egalitarian than others. In Baghdad’s Adhamiya district, the local women’s college is bustling with students, even with the Sahwa in charge. Times are tougher in Anbar’s provincial capital, Ramadi, where tribal troops allow women to work but not to go without headscarves, and polygamy is reportedly on the rise. Women rarely venture out of their homes now in rural Sahwa areas like Arab Jabour, south of Baghdad.

In Anbar, the Sahwa movement’s birthplace, tribal leaders have taken full control. “They have their own personal fiefdoms, and they answer to no one,” says Isobel Coleman, a women’s rights specialist for the Council on Foreign Relations. “The tribal groups may not be directly affiliated with Al Qaeda, but they’re no less conservative.” That may be an exaggeration: the jihadists forced girls into marriages, closed schools and killed indiscriminately. But tribal values are more medieval than those enshrined in the Iraqi Constitution—and this time the gunmen have the backing of the U.S. military. Some fear that worse is coming. “I can see in the eyes of some of them that they have something to say to us unveiled women,” says Samara Ali, 27, a library worker at Baghdad University. “I think that they are waiting for a proper time to speak out.”