Talking to Afghans About the US/NATO Presence 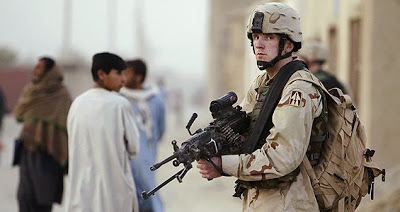 Many Afghans are critical of the US mission in Afghanistan. Photo: GALLO/GETTY.
Afghans uneasy over US relationship
By Aunohita Mojumdar / November 4, 2008

As a managing director of Radio Killid, a radio station dedicated to socially relevant programming, Najiba Ayubi keeps a keen eye on international political developments and is well aware of public opinion in Afghanistan.

Like many Afghans, the position of the US presidential candidates on and their rhetoric towards Afghanistan do not impress her.

“They are tools to come to power with,” she says.

Unlike the focus on talk of a so-called “surge” in the number of troops in Afghanistan which dominates US talk shows and occupies American political pundits, Afghans are concerned on what the troops will do, the nature of the military operations and the rules of engagement.

The increase in both the violence and the number of Afghan civilians being killed, continuing poverty and a loss of hope are making Afghans’ relationship with the foreign presence in their land more complicated.

Many Afghans continue to view foreign troops on their land as a necessary evil, but even those supporting them want fundamental changes in the conditions of their presence.

“We have got some good things from the US – the laws, the new constitution, the parliament – but we would like the international military presence here to be under a framework which includes a date for its withdrawal,” says Ayubi.

Ayubi is no traditionalist. Her radio programming raises social awareness and tackles difficult subjects such as violence against women.

However, she feels Afghans have become very critical of the US because of the increasing civilian casualties in military operations.

She says: “In 2001, we would have welcomed anyone who came to deliver us from the Taliban. But now that feeling is changing.

“The US does not consult anyone. It decides, unilaterally, to do whatever it wants.”

Civilian casualties, for example, could be prevented if there was greater consultation with locals “since the foreign troops do not know the customs or culture”.

What the soldiers take for a militant gathering may just be the Afghan tradition of setting up open kitchens for weddings which go on for several days,” she says.

Khalid Dawari, a young man who works in an architect’s firm, shares Ayubi’s lack of interest in the impact of the US elections on Afghanistan. 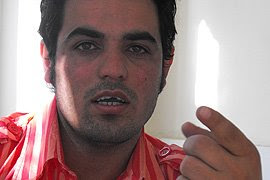 Khalid says little will change under a new US administration
“The foreign policy of the US doesn’t depend on one individual. It will not change.” he says but, unlike Ayubi, he feels civilian casualties are part of any conflict.

He is more strident in his criticism of the western presence.

“Afghanistan has been occupied or captured by Americans or other European countries,” he says, explaining that the very presence of foreign soldiers denotes occupation.

“It is fine for now. But they are doing it for their own benefit. Bush is in the oil and gas business isn’t he?”

Khalid’s remarks reflect the tortured relationship of many Afghans to the presence of the West which is something they cannot live with, nor without.

He believes his country’s president, Hamid Karzai, has been selected by the US and not the Afghans.

“Who is he? We never heard of him earlier. He was not a leader. He has been selected by Mr Bush,” he said.

He sees a substantive portion of the country’s aid going back to the donor countries but sees no way out.

“Afghanistan is not in a situation where it can help itself. We are hopeless from every side. If they withdraw, the Taliban may come and capture Kabul.”

Dawari is clear that the western intervention in Afghanistan is dominated and led by the US.

As for other countries, he says “the rest are just members of the party”.

US dominance of the foreign intervention in Afghanistan is overwhelming.

It has contributed approximately half of the troops there and, between 2002 to 2008, provided one-third of the entire aid to Afghanistan.

The large presence of US consultants, contractors and aid workers has spawned its own economy, services and goods for the expatriate market.

The Kabul Coffee House, for example, is an American style cafe that is frequented largely by internationals.

Haseebullah Fayez, 20, is grateful for his work there as a cashier. 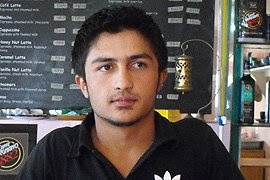 Haseebullah does not want to go back to life under the Taliban
He was living in Kabul during the rule of the Taliban and has strong memories of what life was like.

“I went to school, but got no education. There was no work,” he says.

“After they [the Taliban] left I could study. I learnt English. Now at least we can find some work. I support my family. My father’s salary as a school teacher is only $60 a month and not enough for our family of five,” he said.

Haseeb has been in the cafe for three years and along the way has acquired a taste for cheeseburgers, Bob Dylan’s music and Arnold Schwarzenegger movies.

He regularly hears the criticism of the foreign reconstruction effort in his country.

He agrees that civilians get killed in military operations and that a substantial portion of the money Afghanistan receives goes back to the donor countries.

But his anger is not directed towards them.

“I wonder why it [war and destruction] had to happen to Afghanistan,” he says.

He says that lives do get lost in a war but “they [US forces] don’t want to kill them. It happens by mistake”.

Aziz Hakimi, the country director of the charity Future Generations, digs much deeper than his compatriots, questioning not just the US role but the entire idea of “nation building” by the West. 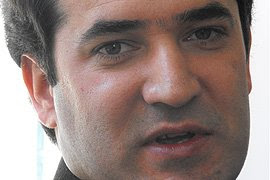 Aziz feels that the West has abandoned Afghanistan
The mistakes made in the initial days of the US intervention – such as putting in power ‘warlords’ and “the very people who are a threat to security” has cost dearly, he feels.

“The Afghans welcomed the intervention as they welcomed change each time. However, just as in the past, they were disappointed again,” he said.

The change in Afghan society must be rooted in the community, he feels.

Decisions must be made by local communities “rather than being dictated by budgets in Brussels or Washington” he says.

Hakimi does not buy into the popular notion that the foreign aid has not been enough.

“It’s dangerous to assume that throwing dollars at the problem will solve it. It will compound the problem. You cannot use development dollars and military might to deal with a political problem.”

While he agrees that the Western presence is dominated by the US, he blames, at least partially, the Europeans who have contributed to Nato’s Afghan troop force, for it, and echoes the feelings of many Afghans who believe the West has abandoned them repeatedly.

“The West abandoned us after they got what they wanted in the Cold War. They are here now to fight the ‘war on terror’,” he says.

He insists: “They will abandon us again if the al-Qaeda is routed. Afghans should think about this.”

This entry was posted in RagBlog and tagged Afghanistan, NATO, U.S. Government. Bookmark the permalink.