Rag Blog Report from Berlin : The Whole World is Watching 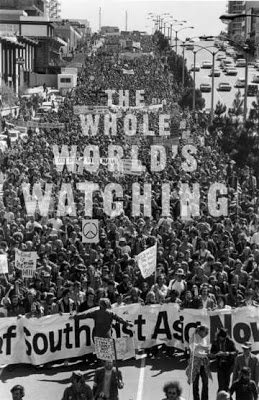 Reflections on the US elections and the possibilities for a better world
By David MacBryde / The Rag Blog / November 4, 2008

BERLIN — You are not alone today. The whole world is watching.

In Berlin tonight we are having a “Party With Us Into the Sunrise” election party. We named it that with the hope that the results will enable a “sunrise” out of dire times, and because it will be sunrise here by the time polls close across the United States. The traditional venue here for US election watching is the Amerika Haus — formally a cultural center run by the US State Department. (Personal disclosure: father Duncan helped initiate it at the end of WW II.) The building is now owned by the city of Berlin. The city has made it available for the event. The place can hold some 300 people.

As the election got closer we thought more space might be needed, and a movie theater offered an additional venue, with room for 800 people. But there have been over 6,000 requests for reservations so far, and climbing. We will set up an outdoor screen and beamer.

Let us hope we can indeed beam.

I voted by mail at my parents last address, in North Carolina. Will be watching the senate race there too.

We will see what happens. The whole world is watching. In addition to the “global electoral college” unscientific readers poll by The Economist (UK), there is an experimental site by three young Icelanders.

After you vote check out On Day One. What do you think the next US President should do on day one?

In 1999, looking to the new millennium, Ted Turner (not without influence from Jane Fonda) donated $1 billion (US) to the United Nations to create the non-profit Better World Foundation for United Nations educational work. On Day One is a current project of the Better World Foundation Add your comments to that campaign. See what others are advocating. It is a long-term project.

London/Nairobi, 22 October 2008 – Mobilizing and refocusing the global economy towards investments in clean technologies and ‘natural’ infrastructure such as forests and soils is the best bet for real growth, combating climate change and triggering an employment boom in the 21st century.

The call was made today by the United Nations Environment Programme (UNEP) and leading economists as they launched the Green Economy Initiative aimed at seizing an historic opportunity to bring about tomorrow’s economy today. Achim Steiner, UN Under-Secretary General and UNEP Executive Director, said: “The financial, fuel and food crises of 2008 are in part a result of speculation and a failure of governments to intelligently manage and focus markets”.

“But they are also part of a wider market failure triggering ever deeper and disturbing losses of natural capital and nature-based assets coupled with an over-reliance of finite, often subsidized fossil fuels,” he said.

“The flip side of the coin is the enormous economic, social and environmental benefits likely to arise from combating climate change and re-investing in natural infrastructure – benefits ranging from new green jobs in clean tech and clean energy businesses up to ones in sustainable agriculture and conservation-based enterprises,” he added.

In the US, the Nation has an article by Van Jones posted Oct. 29 titled “Working Together for a Green New Deal,” about forming alliances, locally and globally, to deal with economic justice, energy and the environment.

And, on the current investment decision crisis, the recession/depression and issues of what future “growth” can be:

Will the excitement, anger and hope around the elections collapse after election day? I think not.

BREAKING NEWS in Germany: first private bank applies for “umbrella” help — will know more in a few days. There is a meeting of European finance ministers on the crisis on Nov. 7. The German approach to dealing with the banks and investment disasters is different from the Paulson plan. Here there is huge pressure against misallocation of public funds. AND the concern here is less with the local banking system than with the real economy and recession. IG Metal, the big machinists and engineers union, went out on a warning strike today. Much pressure to transform the real economy.

Evidently the pressures on Paulson are growing: Here’s a little from the Nov. 4 Wall Street Journal by y Deborah Soloman:

“Treasury’s planning could be complicated by Tuesday’s election. Mr. Paulson has said he wants to involve the next administration in major decisions between now and January. Both Sen. John McCain, the Republican nominee, and Sen. Barack Obama, the Democratic nominee, voted for the $700 billion rescue plan, but a new administration is certain to have its own ideas about how best to use the remaining $450 billion.”