From the end of World War II through 1979 the gains in productivity in the United States were shared between workers and owners — and both benefited as wages rose along with company profits. It was recognized that both capital and labor were important in maintaining a healthy company, and a healthy economy. But with the election of Ronald Reagan in 1980 a different economic theory was put into effect — “trickle-down” economics.

Trickle-down economics was actually not a new theory. It was just a new name for an old economic theory — unregulated capitalism. It was a return to the economic ideas of the 1920’s and before. Workers were no longer rewarded for an increase in productivity. Instead, all of the gains from the increased productivity went to the owners. Once again the 19th century idea of economics took root, which said that capital was the only important thing and labor was little more than a necessary evil (which reduced profits). 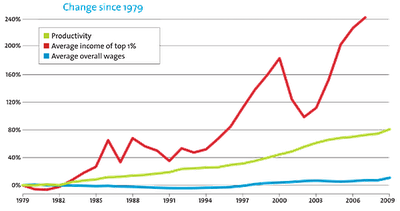 As the chart above shows, this resulted in a stagnation of wages in this country. This stagnation was actually a reduction in wages, since the price of nearly everything has risen since 1980 making the buying power of the stagnant wages much less than it had been in 1979. But while the buying power of workers was falling, the profits of corporate owners (the richest 1%) were skyrocketing — an increase of over 240% since 1980.

It was no longer considered good enough to make adequate, reasonable, or even very good profits. The profits had to be massive, and they were created by refusing to let workers share in the productivity gains.

Now one might wonder how the workers let this happen? Why didn’t they just organize and strike for their fair share as they had done in the past? The answer is they couldn’t — because of two things. The first of these is the weakening of unions by the federal and state governments. This started in the Reagan administration (with the busting of the air traffic controllers’ union) and continues to this day. State “right to work” laws (a misnomer for the right to bust unions) have also played their part in the weakening of unions.

The second powerful tool used by capitalists to keep workers from getting their share of productivity gains is outsourcing. If workers unionized and tried to strike (or threatened to strike), the corporate powers countered this with the threat to outsource the jobs to another country (where they could legally abuse workers with poverty-level wages and no benefits). 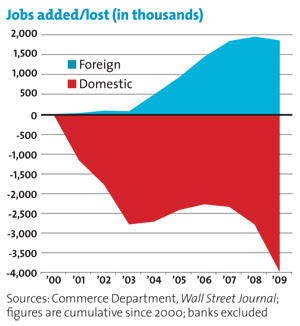 And this was no idle threat. They began to outsource American jobs and that outsourcing is increasing every year (encouraged by government subsidies and tax breaks to companies that outsource). As the chart above shows, it has now reached the point where American companies are creating more jobs in other countries than they create in the United States.

This hoarding of productivity has resulted in a vast inequality in wealth and income in this country. In 2007, the top 1% of Americans owned about 34% of the nation’s wealth, and the top 10 percent controlled more than 70% of the wealth. Meanwhile, the bottom 50% of the population had only 2.5% of the nation’s wealth. And since 2007 this inequal distribution of wealth has gotten much worse.

There was only one place this unregulated capitalism could ultimately lead to — the same place it lead to the last time it was tried. The Great Depression. This time it has led to what is currently being called the Great Recession (which is actually a second Great Depression). It seems that the American people and their leaders have an innate inability to learn from history, causing us to repeat our mistakes — even the bad ones.