Tell Them That They Should Be Blaming Geology 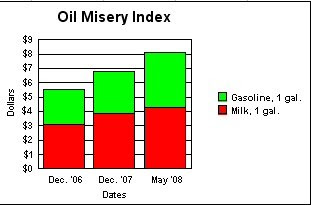 The Iraq War means oil costs three times more than it should, says a leading expert. How are our lives going to change as we struggle to cope with the $200 barrel?

The oil economist Dr Mamdouh Salameh, who advises both the World Bank and the UN Industrial Development Organisation (Unido), told The Independent on Sunday that the price of oil would now be no more than $40 a barrel, less than a third of the record $135 a barrel reached last week, if it had not been for the Iraq war.

He spoke after oil prices set a new record on 13 consecutive days over the past two weeks. They have now multiplied sixfold since 2002, compared with the fourfold increase of the 1973 and 1974 “oil shock” that ended the world’s long postwar boom.

Goldman Sachs predicted last week that the price could rise to an unprecedented $200 a barrel over the next year, and the world is coming to terms with the idea that the age of cheap oil has ended, with far-reaching repercussions on their activities.

Dr Salameh, director of the UK-based Oil Market Consultancy Service, and an authority on Iraq’s oil, said it is the only one of the world’s biggest producing countries with enough reserves substantially to increase its flow.

Production in eight of the others – the US, Canada, Iran, Indonesia, Russia, Britain, Norway and Mexico – has peaked, he says, while China and Saudia Arabia, the remaining two, are nearing the point at of decline. Before the war, Saddam Hussein’s regime pumped some 3.5 million barrels of oil a day, but this had now fallen to just two million barrels.

Dr Salameh told the all-party parliamentary group on peak oil last month that Iraq had offered the United States a deal, three years before the war, that would have opened up 10 new giant oil fields on “generous” terms in return for the lifting of sanctions. “This would certainly have prevented the steep rise of the oil price,” he said. “But the US had a different idea. It planned to occupy Iraq and annex its oil.”

Chris Skrebowski, the editor of Petroleum Review, said: “There are many ifs in the world oil market. This is a very big one, but there are others. If there had been a civil war in Iraq, even less oil would have been produced.”

David Strahan: What happens next? The expert’s view

At just under 86 million barrels per day, global oil production has, essentially, stagnated since 2005, despite soaring demand, suggesting that production has already reached its geological limits, or “peak oil”.

Recession in the West may not provide relief on prices. There is increasing demand from countries such as China, Russia and the Opec countries, whose consumers are cushioned against rising prices by heavy subsidies. The future could unfold in a number of ways:

Fuel subsidies could suddenly be scrapped, dousing demand. Cost pressures have forced Malaysia, Indonesia and Taiwan to cut them, but China is hardly strapped for cash. Opec producers are under no pressure to abolish subsidies; as the oil price rises they get richer. Prospect: very unlikely.

Deep recession in the West might cut oil consumption enough to offset growth in the developing world and Opec, or even engulf them too, softening prices. Prospect: unlikely in the short term.

Russian oil output has gone into decline; Saudi Arabia has shelved plans to expand production capacity, and advisers to the Nigerian government predict its output will fall by 30 per cent by 2015. More news like this, expect oil at $200 a barrel. Prospect: likely.

The writer is author of ‘The Last Oil Shock’, John Murray, lastoilshock.com.

After 150 years of growth, the oil age is beginning to come to an end. “Peak oil” is the common term for when production stops increasing and starts to decline. At that point what have been ever-expanding and cheap supplies of the resource on which all modern economies depend become scarcer and more expensive, with potentially devastating consequences.

Pessimists believe that production has passed its peak. Optimists say it may be 20 years or so away – which would give us some time to prepare – but are now muted. Last week the hitherto optimistic International Energy Agency admitted that it may have overestimated future capacity. Chris Skrebowski, editor of ‘Petroleum Review’ and once an optimist himself, believes that the world is now in “the foothills of peak oil”. Prices may ease a bit over the next few years, but then the real crunch will come. The price then? “Pick a number!”

This entry was posted in RagBlog and tagged Economy, Global Economy, Peak Oil. Bookmark the permalink.