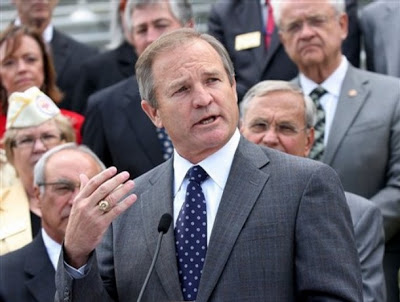 ‘Simply put, Edwards on the ticket would turn Texas purple in one cycle’
By Matt Glazer / August 14, 2008

The convention is less than two weeks away and the tension is mounting. Who will Barack Obama select to be his running mate? It is starting to look like George W. Bush’s congressman, Chet Edwards, is more and more likely.

Certainly, Pennsylvania will be key to victory.

Women, older voters, and suburban voters will all be necessary to achieve this win … Chet Edwards would help Sen. Obama win in swing districts like mine and in states like Pennsylvania…

Chet Edwards would provide strong support to the new administration by engaging Members of Congress to pass critical legislation: health care for all Americans; comprehensive energy policy; new tax policy; and an end to war in Iraq, bringing our troops home safely and responsibly…”

Even as national bloggers like Chris Bowers and some inside the progressive community remain skeptical, the likelihood that Edwards maybe the Senator’s choice is increasing.

CQ Politics points to an interesting fact, most of the people rumored to be on Obama’s short list are slated for speaking times already, and unless they are scheduled to speak twice, the list is either shrinking rapidly or way off base.

As of yesterday, the only rumored candidates not slated to speak in Denver were, Virginia Gov. Tim Kaine, Sen. Evan Bayh, Delaware Sen. Joe Biden, Texas Rep. Chet Edwards, and Gen. Wes Clark. With today’s announcement from the DNCC that both Joe Biden and Evan Bayh have been scheduled to speak at the convention on Wednesday, the list of 5 is down to 3.

This late afternoon announcement has led some to think Kaine is on the cusp of being announced as Obama’s V.P., but something appears to be off in that assessment.

Virginia is already in play. Mark Warner looks to be the heir apparent to John Warner’s vacated seat. Adding Kaine to the ticket doesn’t look to get Obama anywhere. Clark would be a solid choice, looking at a geopolitical question, what states will Clark move? Clark will also highlight the fact that Obama’s resume is focused on domestic policy. Plus, Clark is the only man in the world with a better title than President-Former Supreme Allied Commander. Why would you go from that to Vice President?

That leaves Rep. Edwards. He is a candidate who is a moderate. He is a Democrat who can win tough elections. He is dynamic and engaging. He appeals to independents and moderate Republicans. He expands the base and puts southern races in play on a state and congressional level. He can campaign in rural areas inside New Mexico, Colorado, Montana, Georgia, Virginia, and Ohio. Not to mention the fact he would force the Republicans and McCain to dump money and resources into protecting Texas (a state Obama has been organizing in since March).

The Dallas Morning News describes Edwards as a pivot.

Mr. Edwards, 56, is a moderate, a respected voice on veterans and military issues and well regarded across the political spectrum. Colleagues describe him as a pivot between liberals and Blue Dogs – the bloc of budget cutters and gun rights backers – so he could help Mr. Obama reach swing voters.

As chairman of a subcommittee that controls billions in annual spending, he’s already got more clout than most members of Congress. He’s one of a dozen “cardinals” who serve under the even more powerful Appropriations Chairman, David Obey of Wisconsin.

Mr. Obey called Mr. Edwards one of the “top five or 10 House members” he knows in either party, “an incredibly nice, decent human being” who is “very, very tough minded. … He is most definitely not a slashing partisan. He would be a very good salesperson for the president’s legislative package.”

Simply put, Edwards on the ticket would turn Texas purple in one cycle.