The Problem with Projecting Power 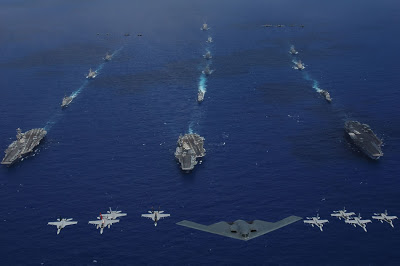 In the U.S. “debates,” it was the bleakest moment for me so far when Barack Obama said he lamented the war in Iraq because it “weakened our capacity to project power around the world.” Not because it was wrong to invade and occupy a distant country, or even because it was a failed war. But because it hampered U.S. ability to invade and occupy other places. In this, he agrees with John McCain, who says the United States has a “sacred duty to suffer hardship and risk danger to protect the values of our civilization and impart them to humanity” by military might. It is a core component of U.S. political culture. You don’t get to run for president without it.

What is the problem with projecting power – aside from the slaughter, pillage and backlash it routinely generates? Well, the effects on the projectors themselves are often overlooked. Israel, for instance, has occupied Palestinian land for 41 years. An Israeli I knew, long ago, described serving in the West Bank and kicking a Palestinian kid, hard, with his army boot, because the kid held a prohibited Palestinian flag.

To his amazement, the kid stood there, so he kicked again. The shame of it never left him. He dreamed of returning to the village, finding the kid and apologizing.

Canada has been ambivalent about its role in military projections by great powers. We’re never sure whether we belong with the empire or the natives. Our view of our soldiers as peacekeepers was an effort to straddle that dilemma. But in the Afghan occupation, we seem to have tilted: We now identify with the big guys, against the little scumbags.

It hasn’t worked well. Insecurity there has increased. Sixty per cent want foreign troops out. Social progress has been minimal. The Taliban are resurgent. But what I really want to talk about are the “blowback” effects on us, at home, from our big military adventure. Let me take one example.

Stephen Harper’s view for years has been that Canada’s social programs are overblown and humiliatingly socialist. (You can Google it.) Yet they’re awfully popular. How do you combat that as a minority prime minister? Try this: We can’t afford it. Except we seem able to. Hmm, okay. Then lower the GST a couple of points, making less money available for the programs. Not bad. But what next?

When asked about it, Stephen Harper held his palms up and said it was all “budgeted.” As in: Sorry kids, but there’s no money left at the end of the month for a trip to the zoo. He’d just announced a meagre $10-million for pulmonary diseases, much like yesterday’s $5-million to lure Canadian doctors home. He calls these outlays modest. How about piddling? They are pathetic compared to what’s required for national child care, pharmacare, the cities or aboriginals. Then add his plan to spend $490-billion on the military in the next 20 years, anticipating future Afghanistans.

It may not be why we went in. But military (over)spending is a superb way to tilt an economy away from social goals. It’s the only big public spending neo-cons like Stephen Harper are comfy with. It’s the U.S. model. They spend $700-billion a year on “defence,” more than the rest of the world combined and the very amount of the big bailout – which itself is related to those projections into Iraq and Afghanistan and will severely hamper a President Obama from doing much domestically – but that’s another several stories.

So there you have it: Canadian blowback from Afghanistan. A solution to Stephen Harper’s dilemma: how to place beloved social programs out of reach. And all this even before the shrivelling effects of a global economic crunch. Imagine what the guy could do with a majority.

This entry was posted in RagBlog and tagged American Hegemony, U.S. Military. Bookmark the permalink.