The Business of Evicting the CIA from Ecuador 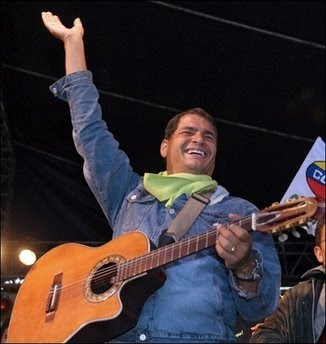 Ecuador’s president Rafael Correa may not be long for this world, both in a political sense and in genuine life-or-death sense. He recently fired his defense minister, army chief of intelligence, and commanders of the army, air force, and joint chiefs.

Why might those firings cost Correa his job or even his life? Because the reason he fired them was that Ecuador’s intelligence systems were “totally infiltrated and subjugated to the CIA.” As other rulers around the world, including democratically elected ones, have learned the hard way, bucking the CIA is a real no-no that sometimes leads to coups and assassinations.

What’s the CIA doing infiltrating Ecuador’s military intelligence systems? Good question! Maybe it’s because the CIA still fears the threat of communism. Don’t forget that that was the apparent rationale for the U.S. government’s support of Operation Condor, the campaign of assassination and torture co-sponsored by the brutal regimes in Chile, Argentina, Paraguay, Bolivia, Uruguay, Brazil, Ecuador, and Peru during the 1970s. Don’t forget also that many of the brutal military personnel in those regimes received their training at the U.S. Army’s infamous School of the Americas, famous for, among other things, its torture manuals.

To make matters worse for Correa, he promises to throw the U.S. military out of his country when the U.S. government’s lease at its base in Manta expires in 2009. The U.S. government spent $60 million to build the base in 1999, securing a 10-year lease that provided no rent to be paid to Ecuador.

So, why does the U.S. military have a $60 million military base in Ecuador? The base is part of the U.S. government’s much-vaunted 30-year-old war on drugs, one of the U.S. Empire’s never-ending wars around the world. The base houses Awacs surveillance planes whose purported mission is to search for international drug smugglers.

The final nail in Correa’s coffin might be the fact that he is an ally of Venezuela’s Marxist president Hugo Chavez, who himself is a likely target of CIA ouster or assassination.

The good news for Americans in all this is that the Ecuadorian people are doing their best to rid their country of the CIA and the U.S. military. Maybe the Ecuadorans will start a trend in which all other countries will do the same. While it would obviously be best if the American people were to dismantle their government’s overseas empire themselves, having foreigners do it instead by throwing the CIA and the Pentagon out of their countries would be just as effective and beneficial — to both the United States and the people of the world.

Source / The Future of Freedom Foundation / The Rag Blog

This entry was posted in RagBlog and tagged Latin America, U.S. Government. Bookmark the permalink.