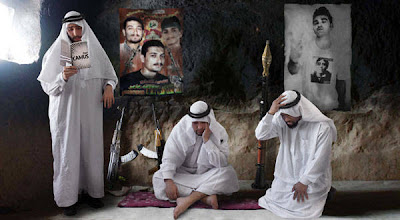 A group of test subjects in an Afghan cave contemplate the banality of modern terror.
Pentagon reveals secret weapon.
April 21, 2008

WASHINGTON—Calling it the most effective tool to date in the War on Terror, the Pentagon announced Monday that it had developed a new chemical weapon called “ennui gas,” a nerve agent that overwhelms its victims with sudden philosophical distress over the meaningless tedium of human life and a sinking sense that everything they have ever accomplished ultimately amounts to dust.

“When the enemy inhales the gas, he will immediately retreat to his bedroom, lock the door, stare at the ceiling, pick idly at his fingernails, and muse upon the similarities between fingernails and the fragility of life,” Defense Secretary Robert Gates said. “While he broods over the futility of memory extinguished and the plaintive whisper of existence unhaunted by all but nothingness, that is when we strike.”

“Given the enemy’s state of mind, he will probably not even care,” Gates added.

Recently disclosed Pentagon documents indicate that the gas has a dissemination radius of four to eight miles, and that neither protective masks nor a positive outlook on life can prevent infection. Symptoms include uncontrollable sighing, repeated utterances of the phrase “What’s the use?” a confusion and bitterness regarding one’s place in the universe, and an increased proclivity to listen to Lou Reed records.

If one’s skin comes into contact with the agent, the physical effects are more severe. These include a sudden numbing of the very soul, a feeling that one is being crushed under the weight of the emptiness all around him, and mild eye irritation.

“Seeing life through the watery lens of pain and hopelessness will significantly weaken the enemy,” Gates said.

More than half of those exposed to ennui gas will suffer some permanent effects, including the tendency to view their existence not as a rich tapestry woven by memory and experience, but as one transitory life’s insignificant brushstroke on the canvas of eternity.

The Pentagon has reportedly been developing the ennui gas for five years, working alongside a team comprising molecular chemist Dr. Sigmund Falstaff, chemical warfare expert Dr. Adrian T. Heinzig, and Dave Eggers. Though they discovered early on that chloroethanol mixed with nitric acid produces an intense disinterest in action, society, and the world in general, it took three years to re-create the indescribable longing condemned to remain unsatisfied. This vague sense of existential angst was finally produced by synthesizing potassium sulfide with phosphorus trichloronate.

According to the Pentagon, lower-grade ennui gas was tested as a crowd-dispersal agent in Islamabad, Pakistan last year. Police reported that within five minutes of releasing the toxin, the rioters abandoned their protest and began penning lamenting odes to various species of bird.

“I am nothing,” said Sayid Al Nazer, one of those who was exposed to the gas. “We are nothing.”

Though critics allege that the gas violates the 1997 Chemical Weapons Convention treaty, the U.S. claims the substance is legal because it is not physically harmful. The military assured Amnesty International and other human-rights groups that ennui gas causes no pain, save for the pain of realizing that one has wasted his life.

“Because ennui gas is a nonpersistent substance, it is highly probable that its victims will someday feel whole again,” said Christie, suddenly furrowing his brow and gripping his temples. “Then again, no one is truly whole, are they? We are all just pieces of flesh and bone masquerading as life, and the world will go on without me, my absence unnoticed, death as futile as life. Pain hath no sting, and pleasure’s wreath no flower.”

Christie then lay down behind the podium and told members of the press to leave, repeatedly stating that there is no point to it all.

Pentagon officials still refuse to comment on rumors that they are close to completing an experimental mutagen that would transform its victims’ DNA into that of television star Kelsey Grammer.

Source. / The Onion / The Rag Blog

The following was posted by Michael J.W. Stickings on August 15, 2006 on The Reaction. We leave it to you to establish a connection, should you be able to get it together to do so. Just remember: there is a hairline’s breadth between what is real and what is dreamt.

According to Slate’s John Dickerson, President Bush read Camus’s novel The Stranger while on vacation this summer. According to Tony Snow, Bush “found it an interesting book and a quick read”: “I don’t want to go too deep into it, but we discussed the origins of existentialism.” Which suggests that the president delved into Heidegger, or perhaps Nietzsche. I suspect he didn’t, but I’m with John on this: “We want a book report!”

What does Bush think of Camus? What did he take away from this rather odd (for him) read (summer or not)? Did he find it challenging? Did it compel him to reconsider his Manichaean worldview? What does he think of existentialism? “Does his experience in Iraq push him to read works replete with themes of angst, anxiety, and dread? Was the president trying to gain insight into the thinking of Europeans who are skeptical of his plan for democracy in the Middle East, founded as it is on the idea of a universal rational essence that existentialists reject?” Will he now turn to The Fall. Or to The Myth of Sisyphus?

All good questions. At least, as far as we know, he isn’t wasting his time with, say, Ayn Rand. Whether he gets the point of Camus or not, whether “he identifies with Meursault,” the Arab-killer, or not, I’d much rather imagine him contemplating the meaning(lessness) of existence than wallowing arrogantly in his own righteousness. Although I suspect this is just some laughable effort by the White House spin machine to make the president look much more thoughtful than he really is, to “challenge the prevailing stereotype about the president’s favorite place and his intellect”. Or maybe Laura made him do it.

Next think you know, Tony Snow will enlighten us of Bush’s understanding of the unbearable lightness of being. Now that would demand a book report!