What Better Time for a New Social Movement? 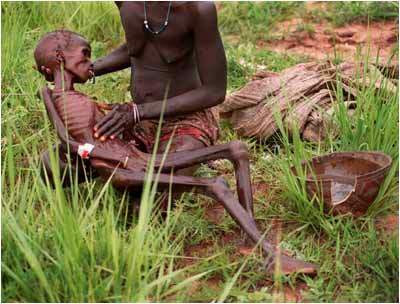 Hunger Plagues Haiti and the World
By Stephen Lendman / April 23, 2008

Consumers in rich countries feel it in supermarkets but in the world’s poorest ones people are starving. The reason – soaring food prices, and it’s triggered riots around the world in places like Mexico, Indonesia, Yemen, the Philippines, Cambodia, Morocco, Senegal, Uzbekistan, Guinea, Mauritania, Egypt, Cameroon, Bangladesh, Burkina Faso, Ivory Coast, Peru, Bolivia and Haiti that was once nearly food self-sufficient but now relies on imports for most of its supply and (like other food-importing countries) is at the mercy of agribusiness.

Wheat shortages in Peru are acute enough to have the military make bread with potato flour (a native crop). In Pakistan, thousands of troops guard trucks carrying wheat and flour. In Thailand, rice farmers take shifts staying awake nights guarding their fields from thieves. The crop’s price has about doubled in recent months, it’s the staple for half or more of the world’s population, but rising prices and fearing scarcity have prompted some of the world’s largest producers to export less – Thailand (the world’s largest exporter), Vietnam, India, Egypt, Cambodia with others likely to follow as world output lags demand. Producers of other grains are doing the same like Argentina, Kazakhstan and China. The less they export, the higher prices go.

Other factors are high oil prices and transportation costs, growing demand, commodity speculation, pests in southeast Asia, a 10 year Australian drought, floods in Bangladesh and elsewhere, a 45 day cold snap in China, and other natural but mostly manipulated factors like crop diversion for biofuels have combined to create a growing world crisis with more on this below. It’s at the same time millions of Chinese and Indians have higher incomes, are changing their eating habits, and are consuming more meat, chicken and other animal products that place huge demands on grains to produce.

Here’s a UK April 8 Times online snapshot of the situation in parts of Asia:

— thousands of (Jakarta) Indonesian soya bean cake makers are striking against the destruction of their livelihood;

— once food self-sufficient countries like Japan and South Korea are reacting “bitterly (as) the world’s food stocks-to-consumption ratio plunges to an all-time low;”

— India no longer can export millions of tons of rice; instead it’s forced to have a “special strategic food reserve on top of its existing wheat and rice stockpiles;”

— Thailand is the world’s largest rice producer; its price rose 50% in the past month;

— countries like the Philippines and Sri Lanka are scrambling for secure rice supplies; they and other Asian countries are struggling to cope with soaring prices and insufficient supply;

— overall, rice is the staple food for three billion people; one-third of them survive on less than $1 a day and are “food insecure;” it means they may starve to death without aid.

The UN Food and Agricultural Organization (FAO) reported that worldwide food costs rose almost 40% in 2007 while grains spiked 42% and dairy prices nearly 80%. The World Bank said food prices are up 83% since 2005. As of December, it caused 37 countries to face food crises and 20 to impose price controls in response.

It also affected aid agencies like the UN’s World Food Program (WFP). Because of soaring food and energy costs, it sent an urgent appeal to donors on March 20 to help fill a $500 million resource gap for its work. Since then, food prices increased another 20% and show no signs of abating. For the world’s poor, like the people of Haiti, things are desperate, people can’t afford food, they scratch by any way they can, but many are starving and don’t make it. 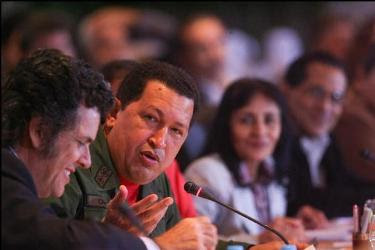 President Hugo Chávez in the Meeting of Intellectuals and Artist
for the Latin American Peace and Sovereignty, Caracas

President Hugo Chávez said that tons of seven extended-consumption food will be shipped and recalled the terrible situation of Latin America’s and the Caribbean’s first independent nation.

“We are providing Haiti with a shipment of food in the next hours,” announced the President of the Bolivarian Republic of Venezuela, Hugo Chávez, on April 12, during the Meeting of Intellectuals and Artists for the Latin American Peace and Sovereignty, held in Caracas.

This aid includes 364 tons of food to contribute towards a solution of the critical situation in the Caribbean nation as a consequence of the increase of food prices, especially rice, which has unleashed violent riots in the last days.

This shipment will include 52 tons of each of the following foodstuffs: meat, chicken, mortadella, milk, black beans, oil and lentils. “This will help alleviate somehow a very big and deep crisis,” added President Chávez.

President Chávez recalled his experience when he visited the Republic of Haiti on March 12, 2007, when he walk the streets of Port-au-Prince, Haiti’s capital city, accompanied by the city’s people. He explained the passion he felt when sharing with the Haitian people.

“The situation, you know it’s terrible. Haiti was demolished as a Republic, as a state and as a nation,” he said.

Violent riots have caused at least five casualties resulting from confrontations between demonstrators, the police and the United Nations Stabilization Mission in Haiti (Minustah).

Haiti, the first Latin American and Caribbean Republic (it achieved its independence from France in February, 1804), is Latin America’s and the Caribbean’s poorest nation, with an average per capita income below US $ 2.

The Meeting of Intellectuals and Artists for the Latin American Peace and Sovereignty ended on April 13, and was held on the occasion of celebration of the “Week of the Brave People.”

This entry was posted in RagBlog and tagged Poverty, Social Action. Bookmark the permalink.