The Case for Corporate Accountability: Royal Dutch Shell in Nigeria 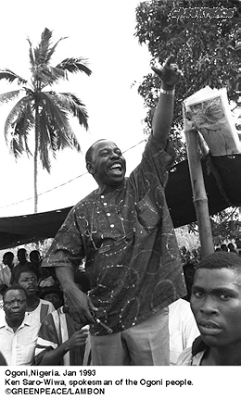 The son of the executed activist faces the oil giant in a human rights trial this week. He seeks understanding rather than retribution.

This week, a US court will hear a case that I and nine other plaintiffs filed against Royal Dutch Shell for its part in human rights violations committed against some Ogoni families and individuals in Nigeria in 1995. For some, the case is already being cast as a bookmark in the struggle for corporate accountability, but to me and the other nine plaintiffs it is all that and more.

Fourteen years ago, Ken Saro-Wiwa predicted that Shell would one day have to account for its actions in Nigeria. “I repeat,” he wrote in what would have been his final statement to the military tribunal that was to order his execution, “that I and my colleagues are not the only ones on trial. Shell is here on trial… the company has, indeed, ducked this particular trial, but its day will surely come … there is no doubt in my mind that the ecological war that the company has waged in the delta will be called to question sooner than later and the crimes of that war be duly punished. The crime of the company’s dirty wars against the Ogoni people will also be punished.”

My father was prevented from making his final statement to the court and he and eight of his colleagues were tried and executed for their alleged role in the harrowing murders of four Ogoni chiefs including his brother-in-law. The murders divided my family and set Ogoni against Ogoni, providing a convenient excuse for the military regime to arrest my father, detain and torture scores of innocent men and send in a military taskforce whose leader publicly vowed to “sanitise” Ogoni so that Shell could drill oil in my community.

Ken Saro-Wiwa’s real “crime” was his audacity to sensitise local and global public opinion to the ecological and human rights abuses perpetrated by Shell and a ruthless military dictatorship against the Ogoni people. The success of his campaign had mobilised our community to say “No to Shell” and to demand compensation for years of oil spills that had polluted our farms, streams and water sources. My father called the world’s attention to the gas flares that had been pumping toxic fumes into the Earth’s atmosphere for up to 24 hours a day since oil was discovered on our lands in 1958. He accused Shell of double standards, of racism and asked why a company that was rightly proud of its efforts to preserve the environment in the west would deny the Ogoni the same.

In response to his campaign, Shell armed, financed and otherwise colluded with the Nigerian military regime to repress the non-violent movement, leading to the torture and shootings of Ogoni people as well as massive raids and the destruction of Ogoni villages. In an infamous memo, Colonel Paul Okuntimo, the head of the military taskforce sent to pacify Ogoni, boasted that Shell provided the logistics for his soldiers. In one incident, Shell was building an oil pipeline and requested support from the Nigerian military. The pipeline destroyed Karalolo Kogbara’s farm and, as she was crying over her lost crops, the soldiers shot her. In another incident, Uebari N-nah was shot and killed by soldiers near a Shell flow station; the soldiers were requested by and later compensated by Shell.

A year after the executions, some of the relatives of what has become known as the “Ogoni Nine” filed a federal lawsuit against Shell in a district court in New York. We felt we would not get a fair hearing in a Nigeria groaning under the very same military dictatorship that had colluded with Shell to violate the human rights of our relatives and our community.

In response Shell, which denied that it encouraged violence against Ken Saro-Wiwa, or other Ogonis, and said it attempted to persuade the Nigerian government to grant clemency to the Ogoni 9, hired the most expensive legal minds to prevent us from holding them to account for their actions in the US. Their filibustering brought 13 years of time, four spent arguing over where they should stand trial.

No doubt Shell will try to present themselves as the victims, whose only interest was to produce hydrocarbons in a “challenging” business environment. But can you be so sure of Shell? This, after all, is a company that, as revealed in an investigation by this paper in January 1996, lied about importing arms to Nigeria. And even its own consultants concluded in a 2003 report that its community development schemes were fanning the flames of conflict in the Niger Delta. Shell declined to publish the results. Moreover, this is a corporation that was widely reported to have misled investors and shareholders in 2004 about the size of its reserves in places like Nigeria.

For that financial violation, the New York stock exchange moved quickly to protect the rights of shareholders and investors and Shell was fined $100m. It took less than two years to hold a multinational corporation to account in a US court for financial violations in a foreign jurisdiction.

And yet it has taken 14 years to bring a case to trial against the same multinational corporation in a US court for human rights violations.

All over the globe, people are becoming better informed about the global economy. People are joining the dots that connect the oil under their farms to the extravagant lifestyles in the west. You can make these connections via cable television in my village even thought there is no pipe-borne water and the electricity mostly comes from a diesel generator. There is increasing awareness of the connections between irreversible climate change and our thirst for fossil fuels. More and more people are now feeling the effects of unregulated corporations.

My father was not against oil exploration and production. He appreciated many of the benefits of capitalism, valued the “can-do” spirit, the innovation and would never deny the right of anyone to seek adequate reward and fulfilment from their risk and sweat equity. But can we continue to put profits before people and the planet? How do we monitor institutions and organisations that have the capacity to operate and organise themselves beyond the regulation and jurisdiction of the current regimes of global governance?

Ken Saro-Wiwa always maintained that Shell would eventually come to see him as their greatest friend. He believed that the day would come when Shell would understand that its social licence to operate is as valuable as its commercial rights. In a competitive and uncertain world where the price of doing business becomes ever more unpredictable, where more players – Russians, Indians and Chinese – are able to compete for drilling rights, it will become ever more important to win the battle for local hearts and minds to advocate for a world run on mutual benefit rather than exploitation. 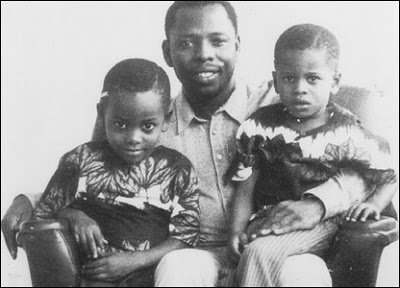 For the relatives, the trial remains our last opportunity to close this sad chapter in our lives. For 12 years, we have all separately developed strategies to survive, living with the anger and the rage that one’s relative was unjustly murdered and that many of the institutions and individuals who were responsible for human rights violations continued not only to get away with murder but also to profit from their crimes.

We have remained dignified while the world has moved on. Few have ever wondered about the emotional or financial welfare of the victims but real lives, real people were destroyed.

In the face of the provocations and psychological trauma of all this, I have tried to maintain a dignified position, worked assiduously to deny myself the right to grieve in order to find a lasting solution to the challenges of the Ogoni and the Niger Delta in Nigeria.

The day after my father was hanged, I was asked my opinion of Shell and I didn’t hesitate to answer that Shell was part of the problem and must be part of the solution.

I haven’t changed my opinion. I am not interested in retributive justice but a justice that is creative, a justice that enables all stakeholders in this affair to account for and learn lessons from the past so that we can all move forward within a constructive and sustainable framework. We have to remain committed to building the kind of world that ensures that people who live on natural resource-bearing areas are not treated as collateral damage in a senseless race for profit.

With all of its experience in Nigeria, Shell knows that such creative justice is possible and the time for us to move in that direction is at hand.