The Financial Three-Card Monte Falls Down 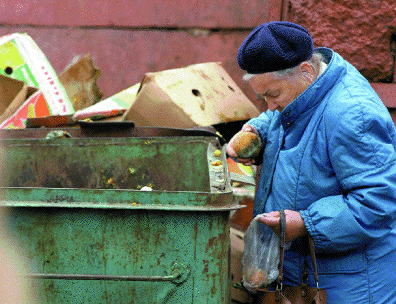 “Far From Normal”
By Jim Kunstler

Those were the words that Fed chairman Ben Bernanke used to describe the financial markets (and by extension the economy) these heady spring days when everybody else with a rostrum, it seems, has pronounced the so-called liquidity crisis contained. There’s a great wish for American finance to return to business-as-usual — raking in fantastic fees for innovating new modes of tradable paper, and engineering mergers and buy-outs that generate huge fees plus $100 million kiss-offs for corporate CEOs in the noble struggle to dismantle America’s productive capacity — but apparently events are still out of hand.

The Federal Reserve itself has been instrumental in promoting abnormality by doing everything possible to prevent the work-out of bad debts in the system. Since money is loaned into existence, and loans are debts, the work-out of bad debt suggests the discovery that a lot of money has disappeared — which is exactly the case. The Fed has postponed the work-out by sucking up truckloads of impaired, untradable securities in exchange for loans to giant banks who don’t have enough cash on hand to pay their janitors.

Personally, my theory has been that the specter of peak oil pretty clearly implies the inability of industrial economies to continue producing real wealth in the customary way. In the face of this, either consciously or at a more mystical level, the worker bees in banking recognize that, in order to maintain their villas in the Hamptons, money has to be loaned into existence some other way (than in the service of industrial productivity).

We’ve tried just about everything else. There was the so-called service economy, an attempt to replace manufacturing with hamburger sales. Then there was the information economy, in which work would be replaced with knowing about stuff. Then there was the tech thing, which was about bringing internet companies that existed only on the back of cocktail napkins to the initial public offering stage of capitalization — which allowed a few-hundred-or-so thirty-year-old smoothies to retire to vineyards in the Napa Valley, while hundreds of thousands of retirees lost half the value of their investment portfolios. Then there was the housing boom, which was all about the creation of more suburban sprawl under the theory that houses (or “homes” in the jargon of the realtors) represent an obvious sort of wealth, and therefore that using houses as collateral would allow humongous sums of money to be loaned into existence — along with massive fees for structuring the loans into bundles of bond-like thingies.

This has all failed now because the racket went too far. Every possible candidate for a snookering got snookered. Too much collateral for which there were no takers went into the ground. The insane run-up in house values made a downward price movement inevitable, and as soon as the turnaround happened, it fell into the remorseless algebra of a deflationary death spiral. More importantly, however, this society ran out of tricks for loaning money into existence and instead began to experience the pain of money thought-to-be-in-existence being defaulted into a vapor — and worse, these defaults led to logarithmic chains of money destruction in its places of origin, the investment banks that had created the racket.

The important part of this is that the money is gone. What makes matters truly eerie is that the “bubble” in suburban houses has occurred at exactly the moment in history when the chief enabling resource for suburban life — oil — has entered its scarcity stage.

The logical conclusion of all this is not what the American public wants to hear: we have become a much poorer society and are now faced with the unavoidable task of making major changes in how we live. All the three-card-monte moves at the highest level of finance lately amount to an effort to avoid the unavoidable, acknowledging our losses. Certainly the political fallout of all this will be awesome. But it’s not about politics, really. It’s about the entire society’s inability to form a workable new consensus of reality.

It’s hard to predict how long these institutions at the heart of our economic system can linger in the “far from normal” limbo of pretending that money has not been defaulted out of existence. Since the same process is underway in Great Britain and Spain, places beyond the control of Bernanke, Secretary Paulson, and the Boyz on Wall Street, and since actions and reactions there will affect the destiny of money here, its hard to escape the conclusion that we’re at most months away from the brutal recognition that Wall Street has managed to bankrupt itself (and, by extension, the United States). This is dark heart of the matter of which no one dares speak.

Meantime, on the ground, every mook and minion in the land sees the gas pumps levitate beyond the $4 hash mark, and notes with bugged-out eyes the double-digit price stickers on common supermarket items, and feels the rush of blood from the extremities when some check-out clerk at the WalMart declares that a certain proffered credit card is maxed out, and some strangers in overalls — the neighbors say — managed to hot-wire the GMC Sierra in the driveway, and took it away….

The candidates for president will have a lot to talk about. I wonder if they’ll dare to.

This entry was posted in RagBlog and tagged Economy, Finance. Bookmark the permalink.