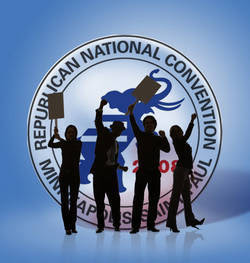 In preparation for the Republican National Convention, the FBI is soliciting informants to keep tabs on local protest groups
By Matt Snyders / May 21, 2008

They were looking for an informant to show up at “vegan potlucks” throughout the Twin Cities and rub shoulders with RNC protestors. Paul Carroll was riding his bike when his cell phone vibrated.

Once he arrived home from the Hennepin County Courthouse, where he’d been served a gross misdemeanor for spray-painting the interior of a campus elevator, the lanky, wavy-haired University of Minnesota sophomore flipped open his phone and checked his messages. He was greeted by a voice he recognized immediately. It belonged to U of M Police Sgt. Erik Swanson, the officer to whom Carroll had turned himself in just three weeks earlier. When Carroll called back, Swanson asked him to meet at a coffee shop later that day, going on to assure a wary Carroll that he wasn’t in trouble.

Carroll, who requested that his real name not be used, showed up early and waited anxiously for Swanson’s arrival. Ten minutes later, he says, a casually dressed Swanson showed up, flanked by a woman whom he introduced as FBI Special Agent Maureen E. Mazzola. For the next 20 minutes, Mazzola would do most of the talking.

What they were looking for, Carroll says, was an informant—someone to show up at “vegan potlucks” throughout the Twin Cities and rub shoulders with RNC protestors, schmoozing his way into their inner circles, then reporting back to the FBI’s Joint Terrorism Task Force, a partnership between multiple federal agencies and state and local law enforcement. The effort’s primary mission, according to the Minneapolis division’s website, is to “investigate terrorist acts carried out by groups or organizations which fall within the definition of terrorist groups as set forth in the current United States Attorney General Guidelines.”

Carroll would be compensated for his efforts, but only if his involvement yielded an arrest. No exact dollar figure was offered.

For 10 more minutes, Mazzola and Swanson tried to sway him. He remained obstinate.

“Well, if you change your mind, call this number,” said Mazzola, handing him her card with her cell phone number scribbled on the back.

(Mazzola, Swanson, and the FBI did not return numerous calls seeking comment.)

Carroll’s story echoes a familiar theme. During the lead-up the 2004 Republican National Convention in New York City, the NYPD’s Intelligence Division infiltrated and spied on protest groups across the country, as well as in Canada and Europe. The program’s scope extended to explicitly nonviolent groups, including street theater troupes and church organizations.

There were also two reported instances of police officers, dressed as protestors, purposefully instigating clashes. At the 2004 Republican National Convention, the NYPD orchestrated a fake arrest to incite protestors. When a blond man was “arrested,” nearby protestors began shouting, “Let him go!” The helmeted police proceeded to push back against the crowd with batons and arrested at least two. In a similar instance, during an April 29, 2005, Critical Mass bike ride in New York, video footage captured a “protestor”—in reality an undercover cop—telling his captor, “I’m on the job,” and being subsequently let go.

Minneapolis’s own recent Critical Mass skirmish was allegedly initiated by two unidentified stragglers in hoods—one wearing a handkerchief over his or her face—who “began to make aggressive moves” near the back of the pack. During that humid August 31 evening, officers went on to arrest 19 cyclists while unleashing pepper spray into the faces of bystanders. The hooded duo was never apprehended.

In the scuffle’s wake, conspiracy theories swirled that the unprecedented surveillance—squad cars from multiple agencies and a helicopter hovering overhead—was due to the presence of RNC protesters in the ride. The MPD publicly denied this. But during the trial of cyclist Gus Ganley, MPD Sgt. David Stichter testified that a task force had been created to monitor the August 31 ride and that the department knew that members of an RNC protest group would be along for the ride.

“This is all part of a larger government effort to quell political dissent,” says Jordan Kushner, an attorney who represented Ganley and other Critical Mass arrestees. “The Joint Terrorism Task Force is another example of using the buzzword ‘terrorism’ as a basis to clamp down on people’s freedoms and push forward a more authoritarian government.”

This entry was posted in RagBlog and tagged Campuses, Espionage, Republican Party, Terrorism. Bookmark the permalink.