The Mission in Afghanistan: Poppy Protection? 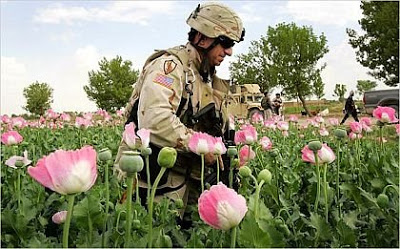 Marines Stuck Protecting Opium in Helmand
By Barnett Rubin / May 8, 2008

An AP story quoting me about the deployment of U.S. Marines to Garmser District, Helmand Province, Afghanistan is making the rounds on the Internets, and mostly being misinterpreted by conspiracy theorists who think it shows that the US government (or the “Bush crime family”) is engaged in drug trafficking. A surprising number of them seem to be Ron Paul supporters. I thought I would try to explain what I think this story is about and what my quoted comments meant.

The Marines of Bravo Company’s 1st Platoon sleep beside a grove of poppies. Troops in the 2nd Platoon playfully swat at the heavy opium bulbs while walking through the fields. Afghan laborers scraping the plant’s gooey resin smile and wave.

The Taliban, whose fighters are exchanging daily fire with the Marines in Garmser, derives up to $100 million a year from the poppy harvest by taxing farmers and charging safe passage fees — money that will buy weapons for use against U.S., NATO and Afghan troops.

Yet the Marines are not destroying the plants. In fact, they are reassuring villagers the poppies won’t be touched. American commanders say the Marines would only alienate people and drive them to take up arms if they eliminated the impoverished Afghans’ only source of income.

Many Marines in the field are scratching their heads over the situation.

Read the rest of it here. / Informed Comment: Global Affairs

This entry was posted in RagBlog and tagged Afghanistan, Drugs, Military. Bookmark the permalink.