The Neocons Had Deliberately Gamed the System

From Juan Cole’s Informed Comment. This demonstrates the depth of criminality centred in the White House and highest levels of the BushCo administration. It is beyond me how we do nothing in the face of such contempt for the law and the people. 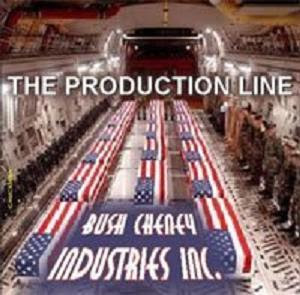 Unger: The Iraq War was a Conspiracy

Craig Unger’s email, part of an interchange on a private discussion group, is reprinted here with permission:

[A critic, let us call him X, objected] to Jim Lobe’s suggestion that Iraqi WMDs and ties to Al Qaeda had nothing to do with starting the Iraq War. But Lobe is right. X is off base when he says nothing “suggests anything other than they believed Saddam Hussein possessed WMDs.”

As my recent book, The Fall of the House of Bush–which owes a debt to Lobe’s fine reporting on the neocons) shows in great detail, Cheney and the neocons effectively created an alternative national security apparatus to circumvent, sabotage and subvert the $40 billion a year that the nation spends on intelligence and to disseminate false intelligence about Saddam that would create a basis for war.

To be specific, let’s take the Niger documents that falsely asserted that Saddam had agreed to buy 500 tons of yellowcake from the Republic of Niger. Many unanswered questions remain about the origin of the documents. But no one contests that they were forgeries that were based on documents stolen from the Niger Embassy in Rome over New Year’s Eve in 2000.

I traveled to Rome to investigate the fabrication and dissemination of the documents, and, as I report in my book, I found that both the documents themselves and the information in them were distributed by right wing elements of Italian intelligence and the neocons in a deliberate manner to make it appear as if there were multiple independent sources corroborating one another, when in fact the only source were the original phony documents.

When the White House wanted to use the documents to build the case for war in an October 2002 speech Bush gave in Cincinnati, the CIA intervened twice to say the information was not reliable.

As I also show in my book, these documents and/or the information in them were discredited by Western authorities(including the CIA and the State Department) on at least fourteen such occasions before Bush’s 2003 State of the Union Address

But none of that stopped Bush from citing this information–or, rather, disinformation– as a casus belli in his famous sixteen words in his 2003 SOTU Address. [ Col. Larry Wilkerson, chief of staff to Colin Powell, told me, if he took something out of Colin Powell’s UN speech 47 times, the neocons would put in 48.]

X seems to suggest that all this could have been the result of mere ineptitude. However, I cite, on the record, no fewer than nine former officials in the military and intelligence worlds who characterize the Niger document episode as black propaganda or part of a disinformation campaign that was intentionally done to mislead the American people into supporting a war.

Likewise, one has only to talk to Tyler Drumheller, the former head of European operations for the CIA, who has recounted at great length how he vetted “Curveball,” the prized Iraqi exile who spun phony yarns about mobile weapons vans, and told his superiors again and again and again that Curveball could not be trusted. Yet George Tenet, under pressure from the White House and the neocons, ignored him. As a result, Colin Powell told the world about the phony mobile weapons vans.

One could go on at great length with many other examples(as I do in my book). But the point is, the neocons had deliberately gamed the system. As their policy papers show, they knew they wanted to start the war long before the administration took office and in order to do so they knew they had to control intelligence. That’s why Wolfowitz, Perle, and Eliot Abrams began making semi-secret trips to Austin as early as 1998 to convince Bush that an invasion was necessary. That’s why, in December 2000, they tried to put Wolfowitz in as head of the CIA. And that’s why, when that didn’t work, they moved him to the Pentagon where he oversaw the creation of the Office of Special Plans which was in charge of putting out phony intelligence.

Likewise, Cheney put John Bolton in at State to keep an eye on Colin Powell and to make sure that State Department analysts at INR( who had repeatedly discovered the errors in the phony neocon intelligence) were kept out of all the key meetings. As a result, Colin Powell made his presentation to the UN based on intel that came from the neocons in Cheney’s office and the Pentagon–not the professionals at Langley and at [the State Department’s intelligence analysis branch,] INR.

As to why, again, I believe that Jim Lobe is on the right track. One has only to read the various neocon policy papers dating back to the 1992 Defense Planning Guidance papers(aka the Wolfowitz Doctrine), A Clean Break in 1996, David Wurmser’s Tyranny’s Ally in 1997, the PNAC papers of 1998, and scores of other articles to see that the neocons had been hoping to start the war for roughly a decade before it actually began. According to these papers, the chief reasons for this grand new strategy of overhauling the Middle East were regional security(ie, Israel) and to protect America’s strategic resources(ie, oil.)

Go here for information about The Fall of the House of Bush and to buy the book.