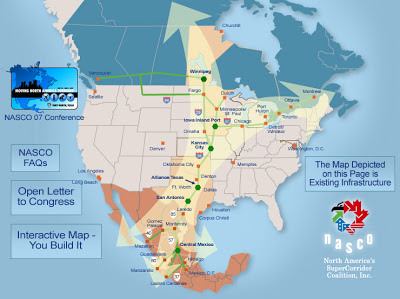 The title refers to the I-69/Trans-Texas Corridor (TTC) portion of the North American SuperCorridor Coalition (NASCO) project. The Texas Department of Transportation (TxDOT) announced that, for now at least, it nixed this part of the $184 billion scheme calling for:

* two or more trans-Texas corridors being considered; one paralleling I-35 from Laredo through San Antonio, Austin, Dallas/Fort Worth to Gainesville; the other an extension following US 59 from Texarkana through Houston to Laredo or the Rio Grande Valley;

* others would parallel I-45 from Dallas/FortWorth to Houston and I-10 from El Paso to Orange;
* they’ll accommodate car and truck traffic;
* rail lines;
* pipelines and utilities; and
* communication systems.

It’s planned across Texas from Mexico to Oklahoma, would have annexed huge private land tracts, and may later on take much of it anyway. Enough to threaten organizations like the Texas and Southwestern Cattle Raisers Association (TSCRA), Texas Farm Bureau and other rural interests. Their member property rights are at stake, so they fought it, and for now, prevailed — at least partly, but the matter is far from settled.

On June 10, Executive Director Amadeo Saenz announced that TxDOT “narrowed the (TTC I-69) study area (to) existing highway (routes) whenever possible,” and “any area (outside) an existing (one) will not be considered” except for necessary portions. NASCO’s Texas highway remains viable. It’s just a little less “Super” and for now will use mostly existing state highways and connect them to northern links.

The larger project is far more ambitious. It’s to develop an international, integrated, secure superhighway running the length and breath of the continent for profit. It’s to militarize and annex it as part of the Security and Prosperity Partnership (SPP) scheme — aka “Deep Integration” North American Union. If completed, it will extend nearly everywhere — North, South, East and West along four main cross-border regions:

* an Atlantic Corridor, including: the Canada-US East Coast; the Champlain-Hudson Corridor; the Appalachian region; and the Gulf of Mexico;
* a Central Eastern Corridor; an urban one through large cities and industrial areas; another through the Great Plains to the Canadian Prairies;
* a Central Western Corridor, including the largest Mexican maquiladora concentration; and
* a Pacific Corridor linking Fairbanks, Alaska to San Diego into Tijuana, Ciudad Obrego and Mazatlan, Mexico.

From north to south, it will extend from Fairbanks to Winnipeg, Manitoba; Edmonton, Alberta; and Windsor, Ontario, Canada through Kansas City, San Antonio and Laredo, Texas into Neuvo Laredo, Monterrey, Guadalajara, and the ports of Manzanillo, Colima and Lazaro Cardenas, Mexico. Other links will connect Montreal, Ottawa, and Toronto, Canada to New York, Chicago, Indianapolis, Denver, Los Angeles, Salt Lake City, Memphis, Dallas, Houston with still more routes to follow — East to West, North to South across Canada, the US and Mexico.

This entry was posted in RagBlog and tagged Economy, Transportation. Bookmark the permalink.