It Would Turn the Middle East Into a Fireball 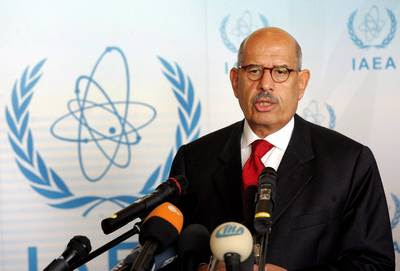 DUBAI — The chief of the United Nations nuclear watchdog said in remarks aired on Friday that he would resign if there was a military strike on Iran, warning that any such attack would turn the region into a “fireball”.

“I don’t believe that what I see in Iran today is a current, grave and urgent danger. If a military strike is carried out against Iran at this time … it would make me unable to continue my work,” International Atomic Energy Agency (IAEA) Director General Mohamad ElBaradei told Al Arabiya television in an interview.

“A military strike, in my opinion, would be worse than anything possible. It would turn the region into a fireball,” he said, emphasizing that any attack would only make the Islamic Republic more determined to obtain nuclear power.

“If you do a military strike, it will mean that Iran, if it is not already making nuclear weapons, will launch a crash course to build nuclear weapons with the blessing of all Iranians, even those in the West.”

The New York Times reported on Friday that U.S. officials said Israel carried out a large military exercise this month that appeared to be a rehearsal for a potential bombing attack on Iran’s nuclear facilities. The newspaper said Israeli officials would not discuss the exercise.

This entry was posted in RagBlog and tagged Iran, U.S. Aggression. Bookmark the permalink.