The Time Has Come for Americans to Blink 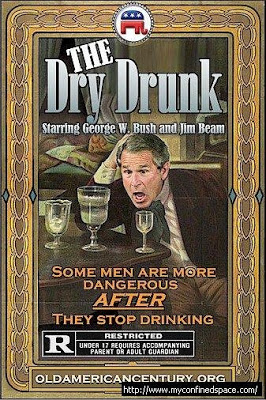 The fate of millions was sealed the moment Dick Cheney selected himself as The Destroyer whose charge to keep for the next eight years would be — as Capitol Hill Blue’s Doug Thompson so succinctly described George W. Bush — a “criminally insane, pill-popping dry drunk.” I don’t know about that. I’ve seen some drunks in my time — even dry ones — and George Bush appears to be more than a little moist.

Bush was the perfect foil for Cheney. The Scalia-driven 2000 election coup catapulted Bush to the top of the political heap. For the first time in his worthless, impotent, cruelly indifferent life, Bush was suddenly important — the most powerful man on the face of the earth — and all because he had been told to scream, “Jezus! Jezus is my philosopher!” to the swooning masses. Makes one wonder at the rigid consent of those same “believers” for the ensuing slaughter of so many innocents — when murdering even one in the name of Jesus should have sent a collective shriek reverberating throughout the religious universe. (See Matthew 18:14; Mark 9:42; Luke 17:2)

Everybody knows that Bush isn’t remotely qualified to be at the helm of the world’s superpower. He can neither think nor speak coherently, can recognize little other than Texas on a map, has completely torpedoed every business venture he attempted, and admittedly was a hard-partying sot until he was 40. Cheney was another matter. He was a household word. He had been a public servant throughout his career. He served as President Gerald Ford’s chief of staff, earned six terms in the House of Representatives where he ascended to the position of minority whip and, finally, was the elder Bush’s Secretary of Defense.

We trusted Cheney to keep Bush from making rash decisions. Was it not Cheney who, at the conclusion of the 1991 Desert Storm assault, made the assessment that to expand the exercise to include regime change in Iraq was not morally sustainable because of the chaotic bloodletting — the needless toll on our uniformed military?

We were wrong. Had we bothered to check the “other priorities” that allowed Cheney to dodge the draft five times on his rise to power, his chilling congressional voting record, his efforts to enrich the military industrial complex by privatizing defense duties and granting massive contracts to Halliburton, we would have known that Cheney was consumed with lust for power and money. We would have known Cheney had been champing at the bit for more than a decade to impose a new order wherein the American Empire controls the world and its resources.

Had we checked, we would have known Dick Cheney was the wrong babysitter for a kid who gets his jollies by blowing things up.

In 1991, Cheney was in the wrong place at the wrong time. But the upheaval of the following decade, the 1994 Republican takeover of Congress, and the expanding manipulative power of the corporate media created the axis of corruption necessary for a Cheney reign of terror. Cheney was ready, as were the militant warmongers of the Project for the New American Century who had been demanding Saddam Hussein’s head for years. At least 12 of the 18 co-signers of the January 1998 letter to President Bill Clinton, and another letter four months later to then House Speaker Newt Gingrich, demanding the overthrow of Saddam were given key positions on Cheney’s destructive team.

The fix was in. Four days before the 2001 inauguration, PNAC’s deputy director, Thomas Donnelly, wrote a memorandum to “Opinion Leaders,” reminding them that “the task of removing Saddam Hussein’s regime from power still remains…Many in the incoming Bush Administration understand this challenge…”

Four months after the inauguration, the White House issued a press release warning that the threat of terrorist-nations using weapons of mass destruction against the American “homeland” was very real. To counter this danger, Cheney put himself in charge of the entire government — departments of Defense, Justice, Health and Human Services, Energy, Environmental Protection Agency, FEMA, and “other federal agencies,” which would naturally include both FAA and NORAD. A new department — the Office of National Preparedness — was created so Cheney could protect us from catastrophic harm and deal with “consequence” management.

The next four months were busy ones. With malicious indifference, Cheney set about screwing the American people; destroying 225-year Constitutional protections, passing secret laws to seize unlimited executive power, and locking both Congress and the public out of the legislative process. Bush provided cover by regaling us with hilarious “Benny Hill” bits of linguistic derring-do, strutting from one presidential photo op to another, falling off couches and bicycles, choking on pretzels, and attacking brush with a chainsaw at his Crawford ranch.

Then it was 9-11. Suddenly Bush was no longer a spoiled, bumbling, schizophrenic little president. In an instant, he was transformed into a loaded codpiece — The Commander in Chief, The Decider of life and death — a modern-day Caligula towering above mankind with lighted depleted uranium firecrackers gripped in both fists. Cheney could not have picked a more willing accomplice to export death and violence to the four corners of the earth…

With smoke still rising from the ashes of Afghanistan, the drive to topple Saddam, who was demanding Euro for his oil, quickly turned into a crusade. It was Cheney-orchestrated and Cheney-driven. Under the deepening shadows of mushroom clouds, administration neoconservatives teamed up with ecstatic corporate media co-conspirators to terrify an already traumatized public. Cheney, Donald Rumsfeld, Paul Wolfowitz and Douglas Feith launched a separate intelligence unit, the Office of Special Plans, to create the propaganda needed to invade Iraq.

Since Bush can’t be trusted to maintain a single train of thought in one-on-one interviews, he hit the campaign trail with a prepared speech he delivered over and over — is now delivering about Iran — frantically catapulting the propaganda that Saddam was ‘threatening America and the world with horrible poisons and diseases and gases and atomic weapons.” Bush convinced a majority of Americans that the Iraqi dictator was allied with Al Qaeda and provided a “safe haven” for terrorists, and if we didn’t wipe him out, he would strike us again without leaving any fingerprints.”

Cheney’s fingerprints are all over every aspect of the drive for war. For a year and a half, Cheney bullied the entire intelligence apparatus, especially the CIA, into making a false case that Saddam was an immediate nuclear threat. He denigrated the International Atomic Energy Agency (IAEA) report that there was no evidence, sneering that the intelligence was faulty, and IAEA Director-General Mohammed El-Baradei had no credibility where Iraq was concerned.

But it was Secretary of State Colin Powell who rolled the loaded dice at the UN Security Council on February 8, 2003, in a presentation even he admitted was “bullshit.” Powell, who is adept at leaving no fingerprints, but whose shadow lingers over decades of slaughtered innocents, carried the water for his masters one last time. When Powell completed his somber charges that Al-Qaeda was in Iraq running “poison camps” full bore, that Saddam was obtaining magnets for uranium enrichment — charges backed up with photos and vials of poison — we were sold. Because we trusted him.

A Moral Fork in the Road

I don’t want to go off on an Aristotelian rant here, but thanks to Cheney and those around him obsessed with world government, this nation appears to be running on empty where morality, or ethos, is concerned. Values such as compassion, sympathy, prudence, virtue, decency, ethics — cannot thrive in a nation controlled by war criminals who force its citizens into submission through fear, violence and propaganda. How can a society be “just” when natural laws have fallen by the wayside and nobody is held accountable for crimes against God and humanity?

We are under the control of the criminally insane. Cheney has turned the greatest democratic republic ever conceived into a world corporation and anointed himself its Chief Executive Officer (CEO). He has supplanted two centuries of protections afforded by the U.S. Constitution and Bill of Rights with executive orders and secret laws. In their lust for power and riches, Cheney and Bush have managed in just seven grueling, sadistic, morally corrupt years to destroy entire nations, including their own. And they accomplished this in the only way possible. Because we permitted it. Because we lost our moral compass.

So we stand here in the blood-sodden mess of two lost wars. Millions — millions — have been displaced, destroyed, dishonored in Cheney’s quest for oil. Tens of thousands of our own citizens are injured, maimed — 4,077 dead — an entire generation of Americans lost in a depleted uranium wasteland. “So?” Cheney says, “They were all volunteers.” He admitted that losing sons or daughters could “be a burden” on families, but reminded us sternly that “the biggest burden” is on the President, who has to send even more to their deaths.

We’re at the crossroads. We can no longer remain neutral nor mill around in confused acceptance of the genocidal madness into which we have been swept. Thomas Jefferson said, “When once a republic is corrupted, there is no possibility of remedying any of the growing evils but by removing the corruption and restoring its lost principles; every other correction is either useless or a new evil.”

Everybody knows the folly of the treasonous “corrections” made to counter the Iran-Contra evil in the 1980’s and early ’90’s — the flurry of Presidential Christmas-Eve pardons allowing convicted criminals to recede into the shadows only to return and metastasize throughout the current Cheney/Bush administration.

Cheney, Bush and their co-conspirators throughout the three branches of government must be removed. Indicted. Convicted. Imprisoned. Voting records of the 435 members of Congress and 33 Senators up for re-election in 2008 must be vetted, and those who do not reflect the will of the people must go. No exceptions. The remaining 17 Senators must either stand or fall on their voting records. If those who are guilty of the same breach of trust as their cohorts refuse to budge, they must be impeached and removed from office.

They have left us with but one choice, and one last chance to make that choice. We have reached a point in the “course of human events” where it is not only our “right but our duty” to throw off this destructive government and institute one which remembers it “derives its just powers from the consent of the governed.”

The time has come for Americans to blink. Because the Abyss is staring back at us.

Sheila Samples sheilastuff.blogspot.com is an Oklahoma writer and a former civilian US Army Public Information Officer. She is a regular contributor for a variety of Internet sites. Contact her at rsamples@wichitaonline.net.

This entry was posted in RagBlog and tagged Bush, Cheney, Corruption, U.S. Government. Bookmark the permalink.