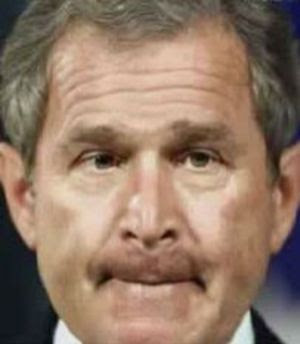 On May 15, the White House Moron, in a war-planning visit to Israel, justified the naked aggression he and Ehud Olmert are planning against Iran as the only alternative to “the false comfort of appeasement, which has been repeatedly discredited by history.”

But the White House Moron has the roles reversed. It is not Iran that is threatening war. It is George W. Bush. It is not Bush who is appeasing. It is Iran.

Iran has not responded in kind to any of Bush’s warlike moves and provocations. Iran has not sunk a single one of our sitting duck ships and has not given the Iraqi insurgents any weapons that would easily turn the tide of war against the United States.

It is Bush, not Iran, who sounds like Adolf Hitler blustering and threatening. It is Bush’s American Brownshirts, the neocons, who express the view: “What’s the good of nuclear weapons if you can’t use them?”

It is the United States that is funding assassination teams inside Iran and using taxpayer dollars to fund dissident and violent organizations opposed to the Iranian government. Iran is doing no such thing here.

It is members of the Bush regime and U.S. generals who continue to lie through their teeth about Iranian support for insurgents, for which they can supply no evidence, and about Iranian nuclear weapons programs, for which the International Atomic Energy Agency inspectors can find no sign.

It is the U.S. print and TV media that serves the Bush regime as propaganda ministry for its lies of aggression.

What would George Orwell make of the Bush regime’s position that anything less than a direct act of naked aggression is appeasement?

The Chicago City Council has passed a resolution “opposing any U.S.
attack on Iran and urging the Bush administration to pursue diplomatic engagement with that nation.” But the White House Moron says diplomacy is appeasement. He learned this false equivalence from the neocon Brownshirts whose control over his administration has made America despised throughout the world, with the exception of Israel.

After broadcasting false claims for weeks from U.S. generals and Bush regime spokespersons that the United States has “definite proof” in the form of captured Iranian weapons that Iranians were “responsible for killing American troops,” the great free American media went silent when Los Angeles Times correspondent Tina Susman reported from Baghdad, “A plan to show some alleged Iranian-supplied explosives to journalists last week in Karbala and then destroy them was cancelled after the United States realized none of them was from Iran.”

A people devoid of a media are sitting ducks for tyrannical government, which is what the United States has.

What is the difference between Hitler’s concocted excuses for his acts of naked aggression and the Bush regime’s plan to use a briefing by Gen. Petraeus, with “captured Iranian weapons” as props, as proof of Iranian complicity in U.S. deaths in Iraq as a means to break down public and congressional resistance to an attack on Iran?

Why has the Bush regime suffered no consequences for this blatant attempt to orchestrate an excuse for another war?

Why have there been no consequences to the regime for the blatant lies it told in order to attack Iraq?

Why has the Bush regime suffered no consequences for its violation of U.S. statutory laws against spying without warrants and against torture?

In the U.S. criminal justice system, three strikes and you are out.

For the Bush regime, is there any limit on its lawless behavior?

How many strikes? A dozen? Thirty? Three hundred?

Is there a limit?