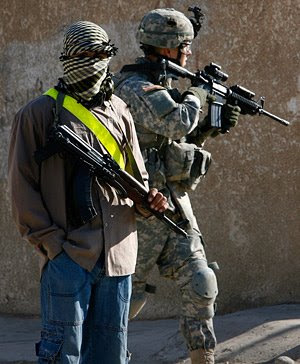 A U.S. Army soldier with the 101st Airborne Division walks past a member of the Iraqi CLC (Concerned Local Citizens) guard during a patrol in Baiji Dec. 27, 2007.
‘We Were Basically Hiring Terrorists’
By Anna Badkhen / August 6, 2008

The U.S. signed up legions of sketchy Iraqi fighters to help stop sectarian violence. Now, most may lose their security jobs — but remain armed and angry.

BAGHDAD, Iraq — Donning pale yellow shirts with Iraqi flags stitched on the chest, Alah al-Janabi and Mahmoud al-Samorai stood recently in the blistering sun at the crowded entrance to the bustling Dora Market. Al-Janabi, 30, proudly displayed a shiny black pistol on his hip; al-Samorai, 25, slung his Kalashnikov assault rifle over his shoulder as he patted down a shopper entering the market. Nine months ago, the two men joined the Sons of Iraq — the U.S.-funded, mostly Sunni organization of 103,000 armed guards that functions as part neighborhood security watch and part paramilitary force, and has been instrumental in tamping down violence in Iraq.

What these men did prior to this work — when sectarian militias and Iraqi security forces fought pitched battles through the Dora neighborhood, killing and wounding scores of people — is unclear. When asked, the two looked at each other and shrugged. “There were no jobs,” al-Samorai finally said. Maybe he and his colleague hid in their homes while sectarian fighting raged outside. But it is also possible that they fought alongside the Sunni militias, as did many Sons of Iraq members, according to American forces that patrol the area.

“When the SOIs stood up, we were basically hiring terrorists,” said Lt. Justin Chabalko, using the military acronym for the Sons of Iraq. Chabalko’s 2-4 Infantry Battalion of the 4th Brigade, 10th Mountain Division frequently patrols the Dora Market.

The Sons of Iraq was formed in 2007, when Sunni tribal leaders, tired of violence and disillusioned with Islamic fundamentalists such as al-Qaida in Iraq, encouraged tribal members — including some former militia members — to guard Sunni and mixed neighborhoods against takeover by sectarian gangs. The Americans touted the creation of the Sons of Iraq as a major diplomatic success and agreed to finance the organization, paying each member a monthly salary of $300, despite the protests from the Shiite-dominated Iraqi government, which never liked the idea of legitimizing the Sunni-dominated fighting force.

The force helped quell the Sunni insurgency in Baghdad and in Iraq’s tribal heartlands, such as the restive Anbar province. But what a year ago looked like a brilliant solution to sectarian violence is now looking like a time bomb. Many of the force’s members once fought alongside al-Qaida in Iraq and other Sunni insurgency organizations against American troops and the predominantly Shiite Iraqi security forces. And now, a joint U.S.-Iraqi government plan to disband the force could put up to 80,000 men out of work — and leave them armed and disgruntled.

As Iraq becomes safer, the Sons of Iraq are less essential to security. Under a draft plan by U.S. forces and the Iraqi government, 20 percent of the force will be gradually folded into Iraqi security forces, after careful screening and additional training. The rest, Americans say, will be offered basic vocational training, which would allow them to take up such jobs as janitors, secretaries, electricians and plumbers. As of June, approximately 17,000 Sons of Iraq members have joined Iraqi security forces.

But conversations with the Sons of Iraq members and their leaders suggest that the majority of them do not want to do anything that does not involve carrying weapons, traditionally an honorable status in Iraqi society.

“A lot of them would prefer doing that because it gives them power of carrying a weapon and providing security,” said Capt. Emiliano Tellado, a member of the 2-4 Infantry Battalion.

Potentially, 80,000 armed and trained fighters could soon find themselves unemployed, or employed in jobs they do not want — and angry at the American forces and Iraqi government because they didn’t get picked for service in the security forces.

Al-Janabi and al-Samorai applied for jobs in the Iraqi police nine months ago for the first time, and reapplied twice since. They have not heard back from the Iraqi government, and they could well be among the many thousands who don’t get to join Iraqi security forces. But both dismissed the idea that they would lay down their guns and take up other work tools.

“That is not my job,” al-Samorai responded, firmly.

“I want to defend my people,” said al-Janabi.

A key question is, to what extent have members of the Sons of Iraq such as these severed their past allegiances. Working as U.S.-paid neighborhood guards was supposed to rehabilitate those who once fought against American and Iraqi forces, said Capt. Brett Walker, the spokesman for the 2-4 Infantry Battalion. Over time, approximately 18,000 Shiite members joined the force as well, working mostly in Shiite and mixed neighborhoods and ostensibly bringing some sense of sectarian rapprochement.

But some of the organization’s Sunni members may still be cooperating with sectarian militias, acknowledged Tellado. Even if the Sons of Iraq continues to function in its current format, the organization is a wild card as far as its members’ loyalties are concerned.

Several months ago, the 2-4’s soldiers detained one Sons of Iraq leader who was once associated with al-Qaida in Iraq, Tellado said. “He had a bad background, and it finally caught up with him,” he explained. “There was a possibility that he was still active” in the extremist Sunni organization. The man is now in Camp Bucca, a giant American detention center in southern Iraq.

Chabalko said that some Sons of Iraq in his area use their positions “as an opportunity to play both sides of the fence, usually the guys at checkpoints.” American soldiers say that Sunni members of the force extorted money from Shiite civilians and attacked people they believed were members of Shiite militias.

In Baghdad’s religiously mixed Risala neighborhood in May, U.S. Army medics treated a man who had been beaten and kicked in the face and torso by Sons of Iraq, who believed that the man was an informant for the Mahdi army, the militia loyal to the anti-American cleric Muqtada al-Sadr. The man survived because the local Sons of Iraq leader, Karim al-Gortani, happened by and ordered them to stop, said U.S. Army Capt. Sean Chase, whose soldiers treated the man. Chase suspects that Gortani, a former Iraqi army colonel under Saddam Hussein, at one point was either a member of al-Qaida in Iraq or Jaish al-Islami, another Sunni extremist group.

In Dora, where 450,000 people live, the Sons of Iraq have not carried out any overt acts of violence, U.S. soldiers say — at least not to the Americans’ knowledge. But that could be because Dora, a middle-class neighborhood that is home to many former officials of Saddam Hussein’s government, is almost homogenously Sunni.

Yet, even here the Sons of Iraq have a potential nemesis — the Iraqi National Police, a SWAT-like organization that patrols Dora. On many streets, members of the two armed groups man checkpoints together, but there is little amicability between them. “At first there was no open conflict, but there was open verbal conflict,” Tellado recalls.

In order to create a rapport between the Sunni guards and the Shiite officers, who also enjoy little trust from Dora’s Sunni population, the Americans have made the Sons of Iraq formally subordinate to the police force.

American military leaders understand the fragility of the peace between the Sons of Iraq and Shiite security forces, and the importance of keeping the Sunni force happy. “We’re gonna continue to pay the SOI guys until the government takes over or until they transition into other jobs,” said 4th Infantry Division Lt. Col. Steven Stover, the spokesman for American troops in Baghdad.

“These Sons of Iraq will eventually go away, and now the most important thing is to find jobs for all those individuals,” Lt. Col. Timothy Watson, the 2-4 commander, recently told a gathering of Sunni leaders in Dora. “It’s just as important providing jobs as it is security.”

Nonetheless, local leaders say the Sons of Iraq remains suspicious of the policemen. Hashem Ajili, one of the senior neighborhood leaders in northern Dora, said American presence is crucial to mediate any potential conflicts between the two groups.

“Currently the relations are getting better — with the support of coalition forces,” Ajili said. If the Americans leave, will the two groups be at each other’s throats? Ajili smiled, and responded diplomatically: “If the coalition forces go back to the States, I am afraid I don’t know what will happen between those two elements.”

Eddie Bello, an Iraqi-born cultural advisor to the American military in Iraq, was more specific. “It is like sitting on a volcano,” he said. “You never know when it will explode.”

[Anna Badkhen has reported from Iraq, Afghanistan, Chechnya, Somalia, the West Bank and Gaza. She lives in Massachusetts with her husband, David Filipov, and their two sons.]