Thomas Zigal :
‘Celebrating The Rag’ is a marvelous compendium that captures the paper’s
unique spirit

This book is a luving homage to quite possibly the best underground newspaper of its era. 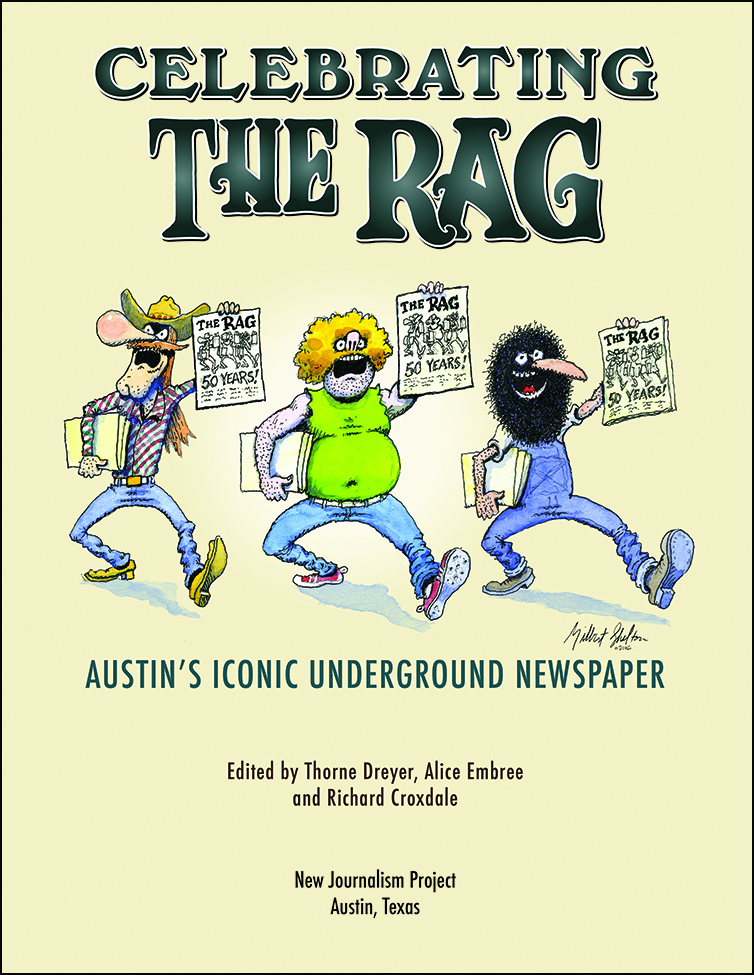 I came to UT-Austin in the fall of 1969 as a transfer student in my junior year. I had spent the previous year studying at a Swiss university, putting an ocean between myself and the Galveston County draft board, which had mistakenly classified me as 1A and began pressing me to show up for army induction and the prospect of Vietnam. (The 1A was eventually changed to a student deferment while I was in Europe.)

By the time I arrived in Austin, I’d hitchhiked around the Continent (including into East Berlin), Great Britain, Scandinavia, and yes, to Morocco, where the hashish was exquisite. So on my first day of class as a UT English major, I left Brackenridge dorm dressed like a walking Bob Dylan song (shoulder-length hair, a natty black vest over my t-shirt, a Moroccan ring, and brown suede Spanish boots of Spanish leather I’d bought in Barcelona) and wandered down to the Drag, where I encountered Alan Pogue selling The Rag. I was hooked after the first issue, and that underground rag became my guide star for the next several years.

The Rag was magnificent. Informative, hilarious, righteously angry when it needed to be, and the perfect melding of New Left politics and hippie dope-smoking, Hendrix-loving cool. I read every word of it every week and discussed the Serious Issues with my friends and classmates. It shaped my thinking more than any other publication at that time in my life, more than Rolling Stone or Mother Jones or whatever else we were reading. 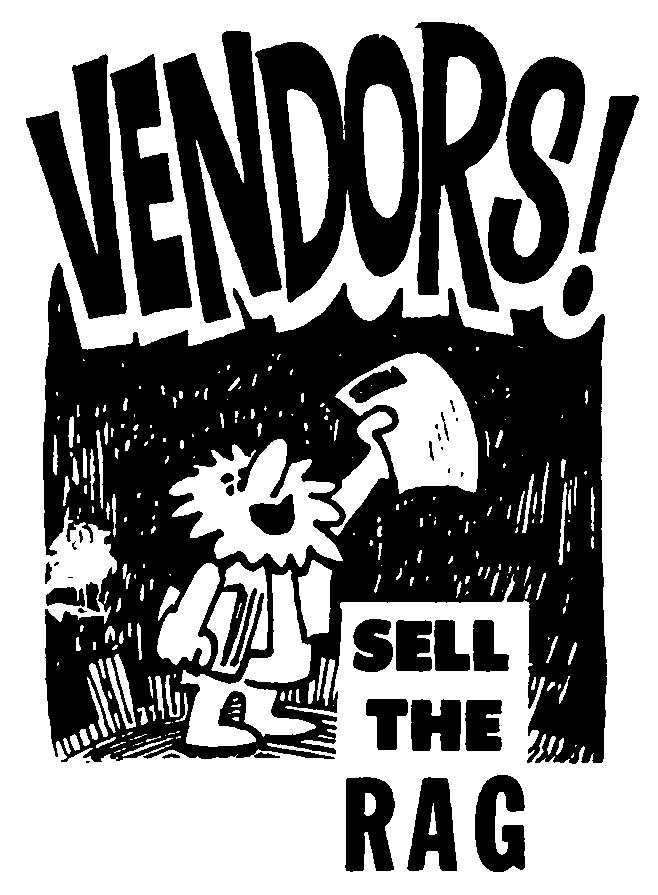 And while The Rag didn’t pretend that all politics is local, to quote Tip O’Neill, it did educate us about what was going down in Austin and in the rest of Texas, a place we hated and loved. Don Weedon’s Conoco station, the Austin cops’ hostility and indifference (whichever suited them), the undercover surveillance, the tear gas (I got a face full of it) down at the Capitol, the continuing emergence of Feminism, Black Power, La Raza, Gay Rights, Ecology (before it was called environmentalism), and all the progressive movements on the right side of history.

The writers and illustrators of The Rag were like gods to me, and I was too intimidated to try and befriend them. Alan Pogue was easy to spot with his cameras, because he was at every rally and event, and I knew who Gilbert Shelton was, and I met Jim Franklin skinny dipping at Barton Creek. (We grew up in Texas City and La Marque, separated by a railroad track.)

But as for Thorne Dreyer, Alice Embree, Gary Thiher, Bill Meacham, Steve Russell, Judy Smith — the writers and occasional typists — I could pick them out of a crowd but I considered them unapproachable, and not because they were unfriendly. They weren’t. But to me it was like trying to approach hippie royalty, like tapping Timothy Leary or Ken Kesey on the shoulder.

Although I was a dope-smoking radical and street-fighting man (chased by Austin cops and cops on horseback in San Francisco), I didn’t know enough about SDS, MOBE, or the minutiae of radical insider stuff to write about politics. I was learning. The Rag was teaching me.

My only contribution to The Rag was a letter to the editor in which I strongly suggested a rent boycott of an Austin slum lord who was exploiting student renters shamelessly. It was printed. I used a pseudonym. The boycott didn’t materialize. 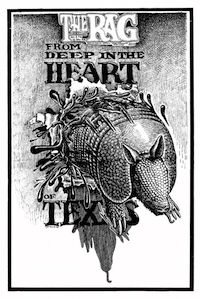 This long, rambling preface is by way of saying I was absolutely delighted when The Rag turned 50 years old in October, and staffers Thorne Dreyer (founder and funnel), Alice Embree, and Richard Croxdale published the marvelous compendium Celebrating The Rag: Austin’s Iconic Underground Newspaper (New Journalism Project). Designer Carlos Lowry uses the original artwork to capture that groovy, mind-warping visual underground comix flavor that distinguished The Rag from the more dour radical newspapers of the ’60s and ’70s. After all, Austin had Gilbert Shelton, Jaxon, and Jim Franklin. Berkeley Barb and East Village Other, deal with that, motherfuckers.

Celebrating the Rag is a luving homage to quite possibly the best underground newspaper of its era, selecting and reprinting The Rag’s greatest hits, but also providing excellent reflections and recollections written from the present day. The new contributions, like Alice Embrees’ heartbreaking “The Murder of George J. Vizard IV,” are fond and often very moving evocations of another time and place, with affectionate tributes to their friends and comrades.

But the writing is never maudlin or sentimental. And in his superb and informative introduction to the book, “Rag Mama Rag,” Thorne Dreyer puts The Rag in historical context, describing where it fit in the underground newspaper movement of the ’60s and quoting numerous scholars and notable observers who praise The Rag’s originality in a crowded and colorful field.

The Rag had an edgy, irreverent sense of humor we all admired and shared.

The secret was humor. The Rag had an edgy, irreverent sense of humor we all admired and shared. Even the letters to the editor were funny:

Fellow Trouble Makers:
I love you too, even if you don’t have chairs, or pencil sharpeners.
Enclosed is a check for $10. Buy something.
Bill from Waco

What an amazing era in an amazing town, and The Rag was there to capture the times and help change them. As the Rag writers explained at the recent 50th anniversary celebration, they would join the protest marches and boycotts, then come back to their funky office in the old University Y and write about what had happened. Participatory democracy, participatory journalism. 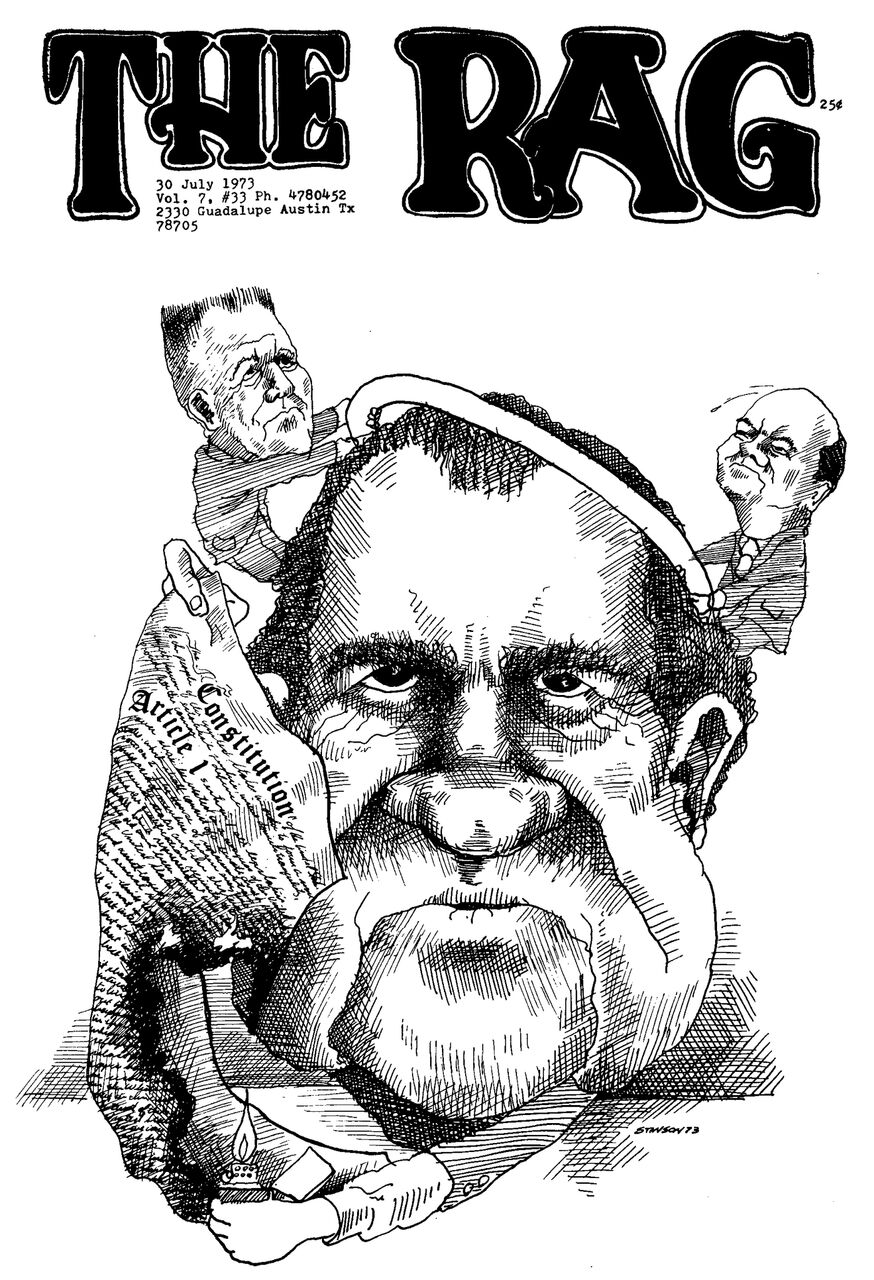 I have been reading Celebrating The Rag very slowly, savoring every article and image. Some I remember, some I don’t. (Hey, I can’t remember what I had for lunch two days ago.) But un-gentle reader, here’s what I suggest. Read this book near your computer or smart phone. Search online for the many references in each article. The twists and turns in those rabbit holes will lead you to remarkable discoveries.

What happened to the young African-American musician Don Weedon punched in a music club, and who in turn knocked Weedon on his ass? What happened to the Daily Texan editor who was actually a police informant? Where is Wobbly writer Dick Reavis and what’s he been doing for 40 years? Where is Gregg Barrios, the guy who brought auteur filmmaker Jean Luc Goddard to Batts Auditorium to screen his new film, La Chinoise? Has Mariann Wizard found happiness, 50 years later, after experiencing such tragedy as a young woman?

This is a Russian novel that will end only when you decide you’ve had enough.

This is not just a book about The Rag and its time, a book that Thorne, Alice, Richard, and Carlos worked on for months and have generously given to us. This is a Russian novel that will end only when you decide you’ve had enough.

My recommendation: Don’t ever get enough of Celebrating The Rag. This was our life, my friends. Remember it. Savor it. Honor those who have passed on. And then go kick some ass and make this a better world for our children and grandchildren. My favorite slogan of the ’60s: “If you don’t hit it, it won’t fall.” The Rag hit it hard, and that’s why you will cherish and admire this book.

♦ Celebrating The Rag will be released in paperback and hardcover on January 31,

2017. Advance reader copies are now available for purchase at Lulu.com.

[Galveston native Thomas Zigal‘s post-Katrina New Orleans novel, Many Rivers to Cross, the second book in his New Orleans trilogy, won the 2014 Jesse Jones Award for Fiction from the Texas Institute of Letters and the Award of Merit from the Texas Philosophical Society. Among Tom’s other work is a series of mysteries featuring aging Aspen hippie sheriff, Kurt Muller.]

3 Responses to Thomas Zigal :
‘Celebrating The Rag’ is a marvelous compendium that captures the paper’s
unique spirit